Difference between revisions of "Faith of the Seven" 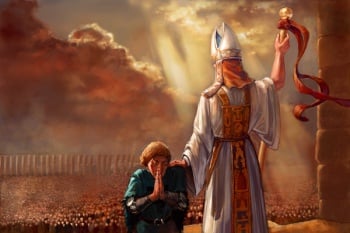 The Faith, Artwork by Nicole Cardiff © 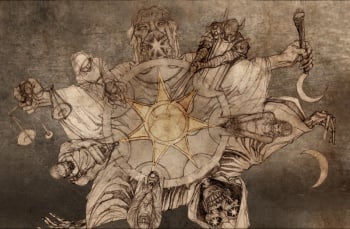 The faith seven aspects of god, Seven pointed star in the middle

The faith seven aspects of god, Artrork by Guad ©

The Faith of the Seven is the dominant religion of the Seven Kingdoms, and is often simply referred to as "the Faith". The only parts of Westeros where the Faith is not widespread is in the North and the Iron Islands, where the practice of the Old Gods and the Drowned God are still strong.

The Faith worships the Seven, a single deity with seven aspects or faces, each representing a different virtue. Worshipers pray to specific aspects of the Seven for help and guidance depending on their need. The aspects are:

The Faith of the Seven is the offical religion of the Seven Kingdoms and is heavily integrated into its laws and culture. The Faith has a great many moral teachings. It frowns on gambling, preaches against bastardy, and curses things like incest and kinslaying. One of the central holy texts of the Faith is The Seven-Pointed Star, which is divided into gospel-like sections, such as the Maiden's Book, also called The Book of the Maiden. Presumably, each of the Seven has his or her own book. Maiden, Mother, and Crone is a song about the females of the seven. It was sung by Hamish the Harper at the wedding of King Joffrey I and Margaery Tyrell.[1]

During trials by combat, the Seven are expected to intervene on the side of the just combatant. In order to become a knight, a squire must spend a nightlong vigil in a sept and become anointed in the name of the Seven. For this reason, there are few knights in areas where the Faith is not kept, such as the North.

The number seven is considered holy to the Faith. It holds that there are seven hells as well as seven faces. Seven constellations in the sky are considered as sacred, and even grace is taught to have seven aspects. The number seven is used to invest rituals or objects with a holy significance. Adherents of the Faith use seven-pointed stars, crystal prisms, and rainbows as icons of the religion. Rites of worship heavily involve the use of light and crystals to represent the seven-in-one god.

The places of worship of the Seven are called "septs", and every sept houses representational art portraying each of the seven aspects. In rural septs, they may merely be carved masks or simple charcoal drawings on a wall, while in wealthy septs, they may be statutes inlaid with precious metals and stones. Worshipers light candles before the altars of the symbolizing each of the seven aspects. Ceremonies are lead by the highest ranking male member of the clergy, and hymns are often sung. In the naming of a child, seven oils are used to anoint the infant. Weddings are conducted standing between the altars of the Father and the Mother. Rites of worship held in rich areas and during special occasions can feature embellishments such as choirs of seventy-seven septas. 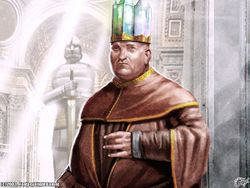 Priests in the Faith of the Seven are known as the godsworn: "septons: if male, "septas" if female, primary servants of the Seven serving in a capacity similar to priests and priestesses of other religions. The septons and septas follow a system of vows, in serving the various orders devoted to aspect of the Seven.

The Faith is ruled by a council of the highest ranking septons and septas, called the Most Devout. The Most Devout are lead by the High Septon, who dwells at the Great Sept of Baelor in the city of King's Landing. Whilst High Septon is usually elected from among the Most Devout, this is not a requirement as non members of the Most Devout have been raised to the office in the past.

Male clergy of the Faith are called "septons," and there are various orders of devotion amongst them, each concentrating their devotion on one aspect of the Seven. For example, there are septons sworn the Smith, and they wear small metal hammers on a thong around their necks. Monastic orders of septons can live in 'septries' (plural of 'septry'), self sustaining enclaves of sworn brothers who are called "Brown Brothers." Septons without a sept wander the countryside ministering to the smallfolk in exchange for food and shelter. They are sometimes disparaged as "begging brothers", and they wear a small metal bowl around their necks. The figurehead of the Faith is known as the High Septon.

Female clergy called "septas", and there are various orders of devotion amongst them. There are orders of septas, called white, grey or blue septas, but it is unrevealed to which aspect of the deity each of them is devoted. There are convents of septas called 'motherhouses,' including a large one in Oldtown. Septas often serve as governesses in the households of the high nobility. A trial of a woman conducted by the Faith will have septas sitting among the seven judges. High ranking septas are counted as members of the "Most Devout", revealing that they have a voice in the selection of a High Septon.

Silent Sisters, is a separate order of women sworn to the service of the Stranger, who have taken the vows of chastity and silence. They handle the bodies of the dead, preparing them for funerals. They are not regarded as septas. Silent Sisters are sometimes referred to as 'Wives of the Stranger.' They clothe themselves in grey and keep their faces cowled except for their eyes.[2]

Silent sisters handling the bodies of the dead, include removing bowels and organs, as well as drain blood, from corpses. They may also stuff the body with fragrant herbs and salts to preserve it and hide the smell of decomposition.

Two military orders, collectively known as the Faith Militant, have existed at times in its history:

Historically, the orders made trouble for the nobles and royalty of the Seven Kingdoms and were brutally repressed by Maegor the Cruel, who put a bounty on the heads of the members of the orders, a gold dragon for any scalp of a Warrior's Son and a silver stag for the scalp of a Poor Fellow, ultimately disbanding the orders and forbade holy men from ever taking up arms again until they were reinstated in the aftermath of the War of the Five Kings by Queen Regent, Cersei Lannister.[3]

Godsworn who choose to wander. They are clad in undyed brown robes, beg for alms and grant blessings to the faithful. They roam the roads of Westeros and preach.

They live and work in a monastic community known as a septry. The members of the septry often take a vow of silence. The septry is headed by the Elder Brother, who is often the only one who may speak at all times. The Eldar Brother is assisted in running the septry by proctors. The brothers engage in contemplation, prayer and silence. The brother wear brown-and-dun robes with wide bell sleeves and pointed cowls. One such septry is on the Quiet Isle.

The faith of the Seven arose in the Hills of Andalos among the Andals. It is claimed that the Seven walked among the Hills of Andolos in human form. The Father brought down seven stars from heaven and placed them on the brow of Hugor of the Hill, the first king of the Andals, to form his crown and the Maid gave Hugor his first wife, who bore him forty-four sons.

The Faith was brought to Westeros by the Andals who invaded from the eastern continent, more than six thousand years ago. where it largely supplanted the local worship of the Old Gods. The city of Oldtown became the center of the Faith, and the Starry Sept in the city served as the seat of the High Septon for a thousand years until the Targaryens came.

When Aegon the Conqueror, invaded Westeros, he adopted the Seven and gained support of the High Septon, who proclaimed that the Faith Militant would not offer resistance to the Targaryen invasion. However, that changed upon Aegon's death and the passing of the Iron Throne to his son Aenys I. The Faith withdrew their allegiance and the Militant orders supported those lords who opposed the Targaryens.

The resulting civil war raged through the reigns of Aenys I and Maegor the Cruel and into the start of the reign of Jaehaerys I. Maegor's brutal repression of the Faith caused tens of thousands of deaths. Eventually, Jaehaerys offered peace to the Faith and the Targaryens' unwavering defense and support in return for the militant orders disbanding to which they agreed.

In the aftermath of the War of the Five Kings, religious fervor in the Seven Kingdoms saw an increase. Many pilgrims and refugees, often called "sparrows", took up the badges and arms of Poor Fellows to protect themselves and other homeless victims of the war. Groups of Poor Fellows took to guarding the Great Sept of Baelor and serving particularly pious nobles. Though common-born, the Poor Fellows showed no respect for secular rank or social position. During her reign as Queen Regent, Cersei Lannister officially reinstated both orders of the Faith Militant as a concession to the new High Septon. Many knights, including Cersei's own cousin Lancel Lannister, joined the reformed Warrior's Sons in the aftermath.