Difference between revisions of "Feature article/31" 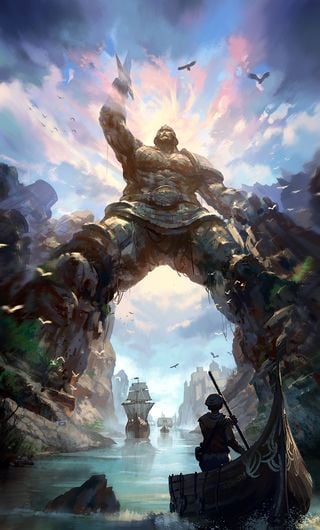 Braavos is the youngest of the nine Free Cities. The city was founded by slaves who had revolted against their Valyrian masters and taken control of the ships bringing them to a new colony in Sothoryos. They took refuge in a vast lagoon surrounded by hills covered with pine trees, where fog hid them from the sight of the dragonlords. There they established their city across a hundred small islands. The city's existence remained a secret for a century, until the Uncloaking of Uthero at the 111th celebration of the city’s founding. However, the city's location remained a secret for another few centuries.

Due to the diverse origins of the slaves who had founded the city, all gods are honored in Braavos, and many have temples in their honor located on the Isle of the Gods. Slavery is expressly forbidden, as stated by the First Law of Braavos. Braavosi nobles dress in grey, purple, or dark blue, while bravos dress in flamboyant colors. While Braavosi generally are kind people, the bravos are quarrelsome and will challenge anyone visibly wearing a sword to a fight. The city's courtesans are renowned worldwide, and bravos are known to kill each other in the name of courtesans. The water dance, a unique form of sword fighting, originates from Braavos as well. The water dancers, the greatest of the Braavosi bravos, duel on the Moon Pool at night, near the Sealord's Palace.

Braavos has become the wealthiest and likely also the most powerful of the nine Free Cities. The city of ruled by the Sealord, who commands the largest fleet of warships as well as mercantile ship. Braavosi ships, with their purple hulls and purple sails, are a common sight all across the Known World. Braavos is also one of the most impregnable cities, as ships who wish to enter the lagoon need to pass underneath the Titan of Braavos (pictured), a stone and bronze fortress in the shape of a gigantic man.