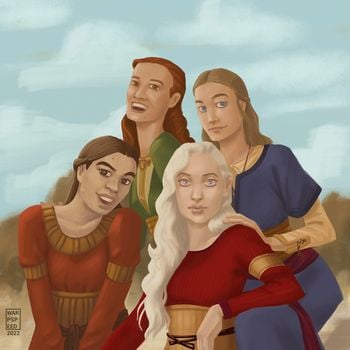 The Four-Headed Beast was the nickname given by Ser Franklyn Farman to Queen Rhaena Targaryen and her three companions: Alayne Royce, Samantha Stokeworth and Elissa Farman.[1]

In 49 AC, when Queen Rhaena Targaryen married Androw Farman, the second son of Lord Marq Farman of Faircastle, they remained on Fair Isle. Rhaena, her new sister-in-law, Elissa Farman, and two of Rhaena's oldest friends, Alayne Royce and Samantha Stokeworth, formed an inseparable group that Ser Franklyn Farman, Elissa and Androw's brother, called "the Four-Headed Beast". Rhaena frequently took her friends flying on her dragon, Dreamfyre. Androw was occasionally admitted to the circle, but never often enough to be called a fifth head, and he never went flying with Rhaena.[1]

Ser Franklyn did not care for the way that the Four-Headed Beast had become the center of court life at Faircastle, and the way Rhaena seemed to encourage Elissa's "wilful ways". Lord Marq Farman died a fortnight after Rhaena and Androw's first anniversary, and the day after the funeral, the new Lord Franklyn expelled Rhaena and her friends from Faircastle, but commanded Elissa to stay and be wed to a man of his choice. Rhaena set flight on Dreamfyre to Casterly Rock, and Androw and the others (including Elissa, defying her brother) followed in the Maiden's Fancy.[1]

At Casterly Rock, Lord Lyman Lannister and his wife Jocasta Tarbeck welcomed Rhaena, her dragon, her husband, and her friends. The Four-Headed Beast and Androw were assigned a regally appointed suite of apartments within the Rock. They remained at Casterly Rock for more than a month, until Rhaena became wary of Lyman's ulterior motives.[1] Rhaena and her court took their leave of Casterly Rock and traveled the westerlands and the riverlands, visiting Ashemark, Castamere, the Golden Tooth, Wayfarer's Rest, and Pinkmaiden Castle. Eventually, in 50 AC, Rhaena was granted Dragonstone by her brother, King Jaehaerys I Targaryen, and settled there with her friends, her husband, and her daughter Aerea.[2]