Difference between revisions of "Galazza Galare"

Galazza Galare is the Green Grace, the high priestess of the Ghiscari Temple of the Graces in Meereen.[2]

Galazza Galare is a tall, graceful-looking woman, despite being near eighty years old. Her hair is white and her skin parchment thin, but the years have not dimmed her piercing green eyes. Daenerys Targaryen thinks they are sad eyes, full of wisdom.[3] As the Green Grace, Galazza Galare wears a shimmering green silk veil that covers her whole face, except for her eyes.[4] She has a soft and kindly voice.[4] 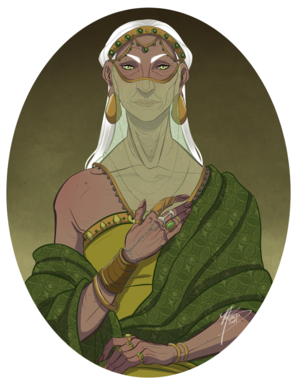 The Green Grace, by Naomimakesart

Galazza Galare's counsel proves invaluable to Queen Daenerys Targaryen, as she is a voice for peace and tolerance.[5] Two of her kin, Grazhar and Qezza, are made the queen's cupbearers and hostages. She suggests Daenerys marry Hizdahr zo Loraq to achieve the peace she desires.[3]

As part of Daenerys's wedding to Hizdahr, the Green Grace says that she should re-open the fighting pits, which would be pleasing to the gods.[4]

When Daenerys disappears and Ser Barristan Selmy seizes control of Meereen in his queen's absence, he sends Galazza to the Yunkai'i to offer his peace terms and gold for the three hostages held by the Yunkai'i. She returns to inform Barristan that the Yunkai'i have refused his offer, and that the only price they will accept is the death of the dragons. She tells him that Daenerys is dead, and that he should let her dragons die as well.[6]

The Mother of Dragons must don the tokar or be forever hated. In the wools of Westeros or a gown of Myrish lace, Your Radiance shall forever remain a stranger amongst us, a grotesque outlander, a barbarian conqueror. Meereen's queen must be a lady of Old Ghis.[5]

Peace is the pearl beyond price. Hizdahr is of Loraq. Never would he soil his hands with poison. He is innocent.[6]