Ser Gerold Dayne, known as Darkstar, is the Knight of High Hermitage. His house is a cadet branch of the Daynes of Starfall.[1]

Gerold is in his late twenties.[3] A handsome man, he has a clean-shaven face with an aquiline nose, high cheekbones, dark purple eyes, and a strong jaw. Gerold has collar-length thick silver hair, divided by a streak of midnight black.[4]

Despite his beauty and valor, Gerold is a cruel man with angry eyes. He is jealous of his famous cousin, the late Ser Arthur Dayne, who was the Sword of the Morning. Darkstar wields a longsword. He prefers to drink unsweetened lemonwater instead of summerwine.[4]

At some point, Gerold was one of the lovers of Arianne Martell.[3] 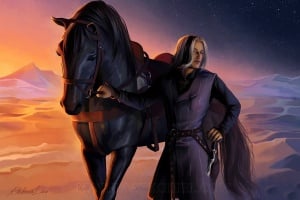 Gerold allies himself with Princess Arianne Martell when she attempts to crown Princess Myrcella Baratheon in place of her younger brother, King Tommen I Baratheon. At Shandystone, Arianne admits to her other conspirators that she only included Darkstar for his fighting prowess and his keep, High Hermitage. Gerold is skeptical of Arianne's plan to provoke Queen Regent Cersei Lannister.[4]

Arianne's party is surprised at the Greenblood by Areo Hotah, who orders them to surrender. Gerold agrees since they are outnumbered, but Myrcella's bodygyard, Ser Arys Oakheart of the Kingsguard, rides to his death in an attack on Areo. Amidst the fighting, Gerold attempts to kill Myrcella.[4] Her horse rears, however, and Darkstar succeeds only in slicing off her ear and scarring her face.[4] He escapes Areo's guards by riding into the sands of Dorne.[5]

Myrcella is taken to Sunspear, where Maester Caleotte saves her life. Arianne ponders whether her plan had been betrayed by Darkstar or by another of her conspirators.[5] 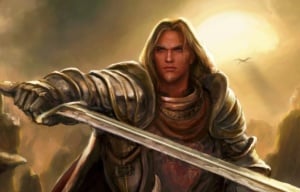 Ser Balon Swann arrives at Sunspear with the Mountain's skull. Under Arianne's instruction, Myrcella has blamed Darkstar, not Areo, for the death of Arys.[6][7] Arianne's father Doran, the Prince of Dorne, sends Obara Sand with Balon to hunt Gerold at High Hermitage.[6][8] Cersei thinks that Darkstar is a catspaw of her brother, Tyrion Lannister, whom she already blames for the deaths of her first son, King Joffrey I Baratheon, and her father, Lord Tywin Lannister.[7]

While traveling to the stormlands, Arianne and Ser Daemon Sand discuss Gerold. Arianne feels that Obara and Areo can kill Darkstar, although Daemon is skeptical. Arianne is regretful for ever trusting Gerold, thinking that he was so handsome she had not believed half the stories told about him.[9] 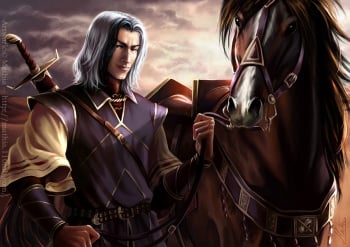 If I led a quarter of a million men to death, would they call me Gerold the Great? I shall remain Darkstar, I think. At least it is mine own.[4]

I was weaned on venom, Dalt. Any viper takes a bite of me will rue it.[4]

Myrcella: Are you the Sword of the Morning now?
Gerold: Men call me Darkstar, and I am of the night.[4]

He is highborn enough to make a worthy consort, she thought. Father would question my good sense, but our children would be as beautiful as dragonlords. If there was a handsomer man in Dorne, she did not know him.[4]

By tradition the Kingsguard were the finest knights in all the Seven Kingdoms ... but Darkstar was Darkstar.[4]

You were a fool to make him part of this. Darkstar is the most dangerous man in Dorne. You and he have done us all great harm.[5]

Ser Gerold is more a viper than your uncle ever was. Prince Oberyn could see that he was poison, he said so more than once. It's just a pity that he never got around to killing him.[9]