A greatsword requires two hands to wield. It is the largest type of sword, considerably longer and heavier than a bastard sword or a longsword. 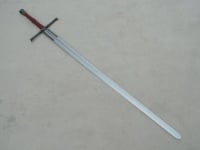 There are several famous greatswords forged of Valyrian steel. These include Ice, Heartsbane and Brightroar.

Due to his great size Ser Gregor Clegane is able to wield a greatsword in only one hand, freeing up the other arm for a shield.[1]

The champions of the northern mountain clans wield huge two-handed greatswords.[2] Greatjon Umber is also described as using one.[3] Household troops of the Dreadfort wield greatswords along with other weaponry.[4]

A good estimate for the size of a typical greatsword would be 1.5 meters (about 5 feet). The size of the sword depends on the person wielding it though, so swords wielded by exceptionally large men may even exceed 1.8 meters (roughly 6 feet).

The sword yielded by Lord Gregor Forrester in Game of Thrones - A Telltale Games Series is a greatsword.[6]