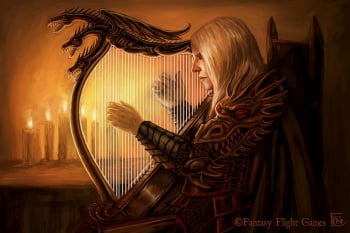 The harp is a musical instrument of the plucked string family. It is popular in Westeros amongst all of society, and is often used to accompany a song. The high harp is mentioned as making soft sweet sounds.[1] A musician who plays the harp is called a harpist[2] or harper.[3]

In order to plant the notion of Ser Loras Tyrell taking the white Littlefinger slips a few silvers to Lord Tyrell's army of singers to sing of Ryam Redwyne, Serwyn of the Mirror Shield, and Prince Aemon the Dragonknight. He tells Sansa Stark that a harp can be as dangerous as a sword in the right hands.[4]

Prince Rhaegar Targaryen appears in one of Daenerys Targaryen's visions in the House of the Undying. At the end of the vision he goes to the window seat, picks up a harp, and runs his fingers lightly over its silver strings. Sweet sadness fills the room as the vision fades, and only the music lingers behind.[5]

When Leonette Fossoway comes to King's Landing she gives Sansa Stark lessons in the high harp.[6]

Tom of Sevenstreams tells his companions that Lady Lysa Arryn once sent him up the high road, where the Moon Brothers took his gold, horse, and clothes. He walked up to the Gates of the Moon with nothing but his harp. There the guards made him sing two songs before letting him pass.[7] 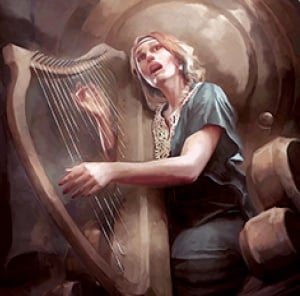 A minstrel at Riverrun playing a harp - by Felicia Cano. © Fantasy Flight Games

When you heard him play his high harp with the silver strings and sing of twilights and tears and the death of kings, you could not but feel that he was singing of himself and those he loved.[17]

Many a night she had watched Prince Rhaegar in the hall, playing his silver-stringed harp with those long, elegant fingers of his. Had any man ever been so beautiful?[18]

—Marillion to Nestor Royce, after being tortured

At the welcoming feast, the prince had taken up his silver-stringed harp and played for them. A song of love and doom, Jon Connington recalled, and every woman in the hall was weeping when he put down the harp.[26]

A harp can be as dangerous as a sword, in the right hands.[4]