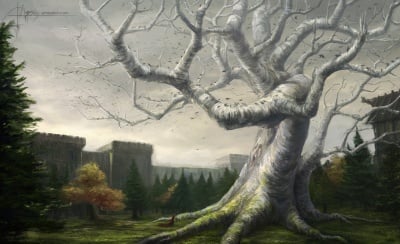 The godswood of Raventree Hall, with its enormous dead weirwood and hundreds of ravens - by Elena María Vacas

House Blackwood of Raventree Hall is an old house from Raventree Hall in the riverlands, one of the main families sworn to House Tully of Riverrun. They once ruled the riverlands as kings during the Age of Heroes.[3] They blazon their arms with a flock of ravens on scarlet surrounding a dead weirwood upon a black escutcheon.[4] Their words have not yet been revealed by George R. R. Martin.[5] House Blackwood rules over wider domains and can field a much larger army than their overlord of House Tully.[6]

Raventree is located in Blackwood Vale north of Riverrun and the Red Fork.[7] Some Blackwoods are buried in the village Cairns, while others are buried beneath the dead weirwood of Raventree.[2]

The Blackwoods are an ancient house descended of the First Men. Family traditions state they ruled most of the wolfswood before being driven from the North by the Kings of Winter, which Maester Barneby's runic translations support.[8]

The Blackwoods and Brackens allied together against the Andal invasion, but they were defeated in the Battle of the Bitter River.[9] The feud was aided by House Bracken's conversion to the Faith of the Seven after the Andal invasion.[10] In contrast, the Blackwoods kept the religion of the old gods, being one of the few houses south of the Neck to do so. The Blackwoods accuse the Brackens of having poisoned the weirwood of Raventree Hall.[2] The Teats, Battle Valley, and the village of Blackbuckle are part of the disputed land. There have been numerous peaces between the Blackwoods and Brackens, many sealed by marriage, but the feud always restarts.[2] Benedict Rivers was a bastard born from both houses who eventually became King Benedict I Justman, with House Justman ruling the riverlands for about three centuries. There were Blackwoods among the many petty kings who disputed the riverlands in the tumultuous century after King Bernarr II Justman's death.[9]

With the support of the Storm King Arlan III Durrandon, Lord Roderick Blackwood rebelled against Humfrey I Teague, King of the Rivers and the Hills. Roderick was killed in the Battle of Six Kings, ending Arlan's attempt to restore the riverlands to the Blackwoods. After the river lords rejected the possibility of being ruled by Roderick's daughter, Shiera Blackwood, Arlan added the riverlands to the realm of the Storm Kings.[9]

When the Kings of the Iron Islands from House Hoare invaded the riverlands three centuries later, Lady Agnes Blackwood led the rivermen's resistance. She was betrayed by Lord Lothar Bracken, however, and then slain by King Harwyn Hoare. The ironborn then conquered the riverlands from the Storm King, Arrec Durrandon.[9]

House Blackwood aided Aegon the Conqueror during his War of Conquest and rebelled against Harwyn's grandson, King Harren the Black of Harrenhal.[11] The Blackwoods and Brackens had been weakened by a private war a decade before the rebellion, however, and Aegon granted the new title of Lord Paramount of the Trident to Lord Edmyn Tully of Riverrun.[9]

Lord Blackwood supported the claim of Laenor Velaryon in the Great Council of 101 AC, but the council ultimately chose Viserys Targaryen as the heir of Jaehaerys I Targaryen.[12] Samwell Blackwood fought a duel with Amos Bracken over the favor of Rhaenyra Targaryen in 112 AC, but the princess eventually wed Ser Laenor.[13] Later, Lord Samwell supported the blacks of Rhaenyra during the Dance of the Dragons. In 129 AC, Samwell was slain by Ser Amos Bracken in single combat during the Battle of the Burning Mill, but Amos was then struck down by a weirwood arrow allegedly fired by Samwell's young sister, Alysanne "Black Aly" Blackwood.[14] Samwell's heir, his eleven year old son Benjicot Blackwood, Alysanne, and their kinsman Red Robb Rivers, the Bowman of Raventree, participated in the Battle by the Lakeshore, the Butcher's Ball, and the First Battle of Tumbleton.[15] Lord Benjicot had one of his best archers, Billy Burley, mercy kill the dragon Tessarion after the Second Battle of Tumbleton.[16][17] During the Battle of the Kingsroad in 131 AC, Benjicot led the army with his liege, Kermit Tully, Lord of Riverrun, and Kermit's brother, Ser Oscar Tully.[6] Benjicot's rivermen broke the flank of Lord Borros Baratheon's greens in the battle, allowing Alysanne's archers to bring down the green knights and giving him the title of "Bloody Ben" Blackwood.[18][19] After the civil war ended, Black Aly married Lord Cregan Stark in exchange for him confirming King Aegon II Targaryen's pardon of Lord Corlys Velaryon.[20]

Lady Melissa Blackwood was the sixth mistress of King Aegon IV Targaryen and the mother of three Great Bastards, Mya, Gwenys, and Brynden Rivers, the last of whom became known as Lord Bloodraven.[21]

Ser Otho Bracken, the Brute of Bracken, slew Lord Quentyn Blackwood in a tourney at King's Landing three years before the tourney at Ashford Meadow, reinvigorating the old feud.[22] Bennifer, Robert, Roland, and Roger Blackwood participated at Ashford. Ser Steffon Fossoway considered convincing Otho or the Blackwoods to fight for Dunk at the trial of seven, but decided it would be impossible to make them fight on the same side.[22] When Lord Bracken lay dying, Septon Sefton explained that Otho would inherit and the Blackwoods would not suffer him, meaning war. The then-Hand of the King, Lord Bloodraven, was half-Blackwood, so he was unlikely to stop it.[23] When Lord Bloodraven marched on Whitewalls to quash the Second Blackfyre Rebellion, among the river lords who came in support was Lord Blackwood. Ser Eustace Osgrey boasted that in the past members of important families married Osgreys, citing Blackwoods as one of the examples.[23] The queen consort of King Aegon V Targaryen was "Black Betha" Blackwood.[24]

Lords Blackwood and Bracken came to Riverrun when Lysa Tully was young to put their feud before Lord Hoster Tully's judgment.[25]

After Ser Jaime Lannister defeats the river lords and captures Ser Edmure Tully, Lord Tytos Blackwood leads the survivors back to Riverrun. The duty of defending the castle during the siege falls to him. With Tytos absent, Raventree Hall surrenders to the Lannisters.[26] Tytos is named among the nobles whom King Joffrey I Baratheon insists must swear their loyalty or be declared traitors.[27]

When Robb Stark attacks the Lannister camps outside Riverrun, Tytos leads the sortie that attacks their rear and frees Edmure. Lord Blackwood and his feathered cloak are seen by Catelyn Stark in the godswood of Riverrun, praying with her son to the old gods after their victory. At the war council at Riverrun, Tytos urges to continue fighting the Lannisters and march against Lord Tywin Lannister at Harrenhal. He joins the other river lords in declaring Robb to be King in the North.[28]

During the War of the Five Kings, Tytos sweeps the Lannister forces from the lands of House Blackwood, but the invaders leave Blackwood Vale a scorched desert.[29] Maester Luwin suggests that the widowed Donella Hornwood marry a Blackwood.[30] Tytos's second-eldest son, Lucas Blackwood, is one of the highborn companions of Catelyn in the delegation to King Renly Baratheon's camp.[31]

Lucas Blackwood, Tytos's second eldest son, is slain by Ser Hosteen Frey at the Red Wedding.[34] After the Brackens surrender to the Iron Throne and are welcomed back to the king's peace, they attack the Blackwoods, who refuse to yield along with Ser Brynden Tully and Lord Jason Mallister. Lord Jonos Bracken besieges Raventree.[35]

Dead soldiers bearing the colors of House Blackwood have washed up on the Quiet Isle. According to the Elder Brother, they are buried next to their Bracken enemies.[36]

House Blackwood at the end of the third century

The known Blackwoods during the timespan of the events described on A Song of Ice and Fire are:

We've had a hundred peaces with the Brackens, many sealed with marriages. There's Blackwood blood in every Bracken, and Bracken blood in every Blackwood. The Old King's Peace lasted half a century. But then some fresh quarrel broke out, and the old wounds opened and began to bleed again. That's how it always happens, my father says. So long as men remember the wrongs done to their forebears, no peace will ever last. So we go on century after century, with us hating the Brackens and them hating us. My father says there will never be an end to it.[2]