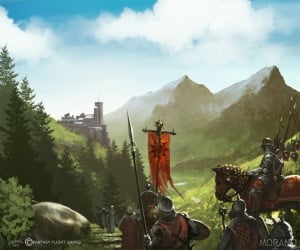 Martell guards during an expedition to the Vale, art by Tomasz Jedruszek © Fantasy Flight Games

House Martell guards are guardsmen in the service of House Martell of Sunspear. Areo Hotah is captain of the guards for Doran Martell.[1]

The Martell guards wield spears and round shields,[1] sometimes using throwing spears and crossbows.[2] Their captain, Areo Hotah, carries a longaxe.[1] The guardsmen wear the colors of the Prince of Dorne.[2] 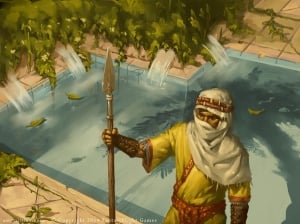 A guard at the Water Gardens, art by Aaron Riley © Fantasy Flight Games

Doran Martell, Prince of Dorne, is guarded at the Water Gardens by thirty spears commanded by Areo Hotah. When Doran returns to Sunspear after the death of his brother Oberyn, Areo leaves ten men to watch the children remaining at the Water Gardens.[1] Angry smallfolk pelt Doran's escort with fruit when they reach the gates of Sunspear.[1] Doran has his captain discretely confine Oberyn's daughters, the Sand Snakes, in the Spear Tower.[1]

Princess Arianne Martell plots to crown Princess Myrcella Baratheon, but her plan is foiled at the Greenblood. Areo appears from a poleboat with more than a dozen spearmen and crossbowmen. Ser Arys Oakheart slashes two spearmen and his horse strikes a crossbowmen, but the Kingsguard is beheaded by Areo.[2] Ser Gerold Dayne wounds Myrcella and then flees from Areo's men into the sands of Dorne.[3] Doran has his daughter confined and placed under guard in the Spear Tower.[3]

Doran: Captain, how loyal are my guards?
Areo: Loyal.[1]

Arianne: Is it so wrong of me to want a knight to keep me safe?


Arys: No, but you have your father's guards to keep you safe, why—