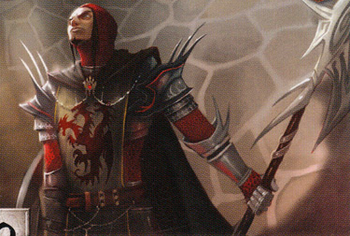 During the First Dornish War, guardsmen twice saved King Aegon I Targaryen from Dornish assassins.[1] Queen Visenya Targaryen was also attacked in the streets of King's Landing one night, and she slew the last assassin with Dark Sister after two of her escorts were killed.[1] Visenya advised Aegon to wear mail at all times for his own protection. After the king refused, Visenya quickly drew Dark Sister and cut her brother's cheek before his guards could react. Recognizing his vulnerability, Aegon decided to have the Kingsguard formed for better protection.[2]

Although only a mere man-at-arms, Dick Bean fought as one of King Maegor I Targaryen's champions in a trial of seven against members of the Warrior's Sons.[3]

During his minority on Dragonstone, King Jaehaerys I Targaryen trained at arms every morning. The young king sparred with his Kingsguard and Ser Elyas Scales, the master-at-arms. Jaehaerys also practiced with Ser Merrell Bullock, the commander of the garrison, and Merrell's sons, Alyn and Howard.[4] In 56 AC Jaehaerys founded the Dragonkeepers, a unit of guards created to guard the Targaryen dragons.[5]

During the Dance of the Dragons, Queen Rhaenyra Targaryen named Ser Robert Quince as her castellan on Dragonstone instead of Ser Alfred Broome.[6] Alfred later betrayed Rhaenyra with the fall of Dragonstone.[7]

Among the men-at-arms who escorted the Targaryen princes to the tourney at Ashford Meadow were Wate and Yorkel.[8]

Ser Tristimun commanded the sea watch on Dragonstone during the reign of King Aerys II Targaryen.[9] The Targaryen dynasty fell from power and lost the Iron Throne during Robert's Rebellion.[10]

Walking through a corridor of the Red Keep, Lord Eddard Stark sees empty suits of black steel armor with dragon scales on the crests of their helms,[11] possibly the armor of Targaryen guards or the Dragonkeepers.

Daenerys Targaryen names Ser Jorah Mormont as the first of her Queensguard.[12]

Ser Barristan Selmy becomes the Lord Commander for Daenerys,[17] but the queen does not establish a proper Queensguard.[18] Unsullied and Brazen Beasts guard Daenerys at the Great Pyramid in Meereen.[19][20]