From A Wiki of Ice and Fire
Revision as of 20:47, 23 September 2022 by Potsk (talk | contribs)
(diff) ← Older revision | Latest revision (diff) | Newer revision → (diff)
Jump to: navigation, search
For others with the same name, see Ice Dragon (disambiguation). 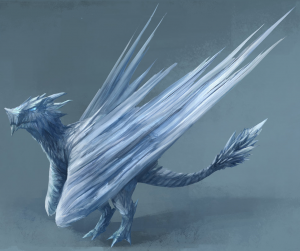 The ice dragon is a legendary species of dragon.

Ice dragons are said to roam the Shivering Sea and the White Waste. Reportedly, they are far larger than the dragons of Valyria and are made of living ice, with eyes of pale blue crystal, vast translucent wings, and breath of cold.[1]

The Ice Dragon is a constellation whose blue eye points north.[2]

Maester Margate has suggested that the tales of Cannibal Bay may be explained as distorted reports of ice dragon activity.[1]

Old Nan told tales of ice dragons to the children of Lord Eddard Stark. She said that the breath of the Ice Dragon was very cold.[3][4]

The cold tunnel through the Wall at Castle Black makes Jon Snow think of an ice dragon.[5]

The ice pressed close around them, and he could feel the cold seeping into his bones, the weight of the Wall above his head. It felt like walking down the gullet of an ice dragon.[5]

In 1980 George R. R. Martin's children's book debut was The Ice Dragon. It is illustrated with pencil drawings by artist Yvonne Gilbert. Several publishers state The Ice Dragon is set in the same world as A Song of Ice and Fire, but Martin has refuted the claim.[7]