The Iron Fleet by Rene Aigner ©

The Iron Fleet is the largest grouping of longships from the Iron Islands. They number one hundred, and unlike other ironborn ships they belong to the Seastone Chair. It is one of the three most powerful fleets of Westeros, along with the royal fleet of the crownlands and the Redwyne fleet of the Arbor.[1]

Each ship of the Iron Fleet is captained and crewed by people of various islands. The ships, while smaller than the war dromonds of the mainland, are three times the size of a standard longship of the Isles.[2] The fleet's commander, the Lord Captain of the Iron Fleet, is Victarion Greyjoy.[3] Quellon Greyjoy, Lord of the Iron Islands, desired stronger ties with the rest of the Seven Kingdoms, but he died in Robert's Rebellion. His son, Lord Balon Greyjoy, reversed Quellon's reforms and instead desired independence for the Iron Islands. Over five years Balon constructed the Iron Fleet, which consisted of ships closer in size to galleys than the ironborn's smaller longships. Their decks were armed with scorpions and spitfires.[4]

At the start of Greyjoy's Rebellion, the Iron Fleet burned the Lannister fleet at anchor at Lannisport.[5] Balon's fleet was later defeated by Lord Stannis Baratheon in a sea battle off Fair Isle,[6] however, which allowed the Baratheons to invade the islands and force into submission Balon, would-be King of the Iron Islands.[7]

According to Victarion Greyjoy, Lord Captain of the Iron Fleet, boys in the Iron Islands dream of having the privilege to one day row for the fleet.[8]

When Lord Balon Greyjoy declares himself King of the Iron Islands and attacks the north, he sends his brother, Lord Captain Victarion Greyjoy, with the Iron Fleet to sail up the Saltspear and the Fever River. From there the ironborn can march on Moat Cailin.[5] 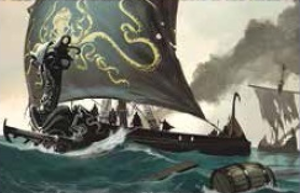 After hearing that King Balon has died and that Aeron Greyjoy has called a kingsmoot on Old Wyk, Victarion returns from Moat Cailin to the Iron Fleet, which has been in the reeds and willows of the Fever River. Nine-tenths of the Iron Fleet sails to Nagga's Cradle in a column reaching back many leagues, losing a ship along the way to rough seas and fickle winds.[9]

Victarion is offered as a candidate at the kingsmoot, but his brother Euron is eventually chosen as the new King of the Isles and the North at the kingsmoot.[10] Baelor Blacktyde, Lord of Blacktyde, refuses to recognize Euron as king, but his Nightflyer is captured by the Iron Fleet while attempting to depart Nagga's Cradle.[11]

The fleet leads the other ships of the Iron Islands in the taking of the Shields. Six ships are lost in the ensuing naval clash, including Hardhand of the Iron Fleet. King Euron commands Victarion to take the Iron Fleet to Slaver's Bay and return with Daenerys Targaryen and her dragons.[11] 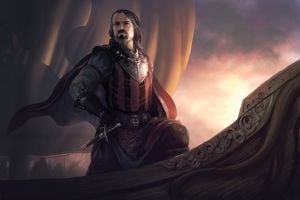 The small number of ironborn ships left behind in the Fever River are torched by the Ryswells and Dustins.[12] Theon Greyjoy convinces the surviving ironborn raiders under siege at Moat Cailin to surrender to Ramsay Bolton, but Ramsay has them executed afterward.[13]

Meanwhile, the 93 remaining ships of the Iron Fleet sets sail for Essos from the Shield Islands. During the voyage they capture a merchant ship, the Noble Lady, taking its cargo and adding the ship to the fleet. In the Redwyne Straits and along the Dornish coast they capture five other ships—three cogs, a galleas and a galley—making the Iron Fleet number ninety-nine. After taking on supplies at the Stepstones, Victarion splits the fleet into three squadrons and sails for Slaver's Bay, with the squadrons to reunite at the Isle of Cedars. At Volantis Victarion learns that the Volantene fleet will soon sail against Daenerys. The Lord Captain orders his squadron to set sail immediately after they purchase food and water.[2]

By the time the three squadrons meet at the tip of the Isle of Cedars, however, only forty-five ships have arrived. These include twenty-two of Victarion's squadron, fourteen of Ralf the Limper's bigger and slower squadron, which had sailed by Lys, and only nine from Red Ralf Stonehouse's swift squadron, which had sailed to the Basilisk Isles. Several straggle back, but some are lost to storms. The Iron Fleet captures nine additional ships, but these are merchant vessels and fishing boats not built for war.[2] The damaged Shark is left at the Isle of Cedars to alert stragglers that the rest of the fleet has continued toward Meereen. The fleet numbers fifty-three to this point minus the Shark.[2]

The fleet continues its voyage, capturing more cogs and galleys along the way. With Moqorro, a red priest of R'hllor, now aiding the fleet, the ships make faster progress and should reach Meereen before the fleet of Volantis. The Iron Fleet currently number sixty-one.[8]

Ships of the Fleet 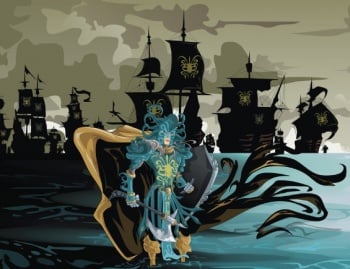 Victarion Greyjoy and the Iron Fleet, by Dejan Delic ©

Known ships of the Iron Fleet.

Euron: It is a fearsome thing to sail beyond Valyria.
Victarion: I could sail the Iron Fleet to hell if need be.[11]

Lord Balon's Great Kraken and the warships of the Iron Fleet were made for battle, not for raids. They are the equal of our lesser war galleys in speed and strength, and most are better crewed and captained. The ironmen live their whole lives at sea.[7]

—Aurane Waters to the small council