Lord Jeor is balding and wears a shaggy grey beard down to his chest.[5] 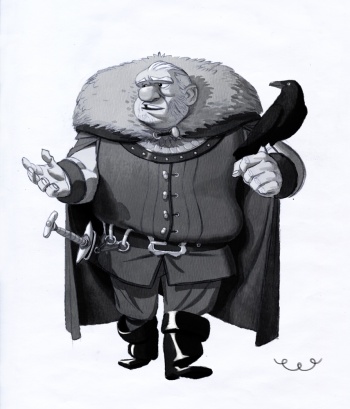 Jeor Mormont was deeply concerned by the declining power of the Watch and the rising threat of the wildlings beyond the Wall. He gave up the regular patrols used by his predecessor, Lord Qorgyle in favor of a more random system, varying the number of patrols and the days of their departure, to make it more difficult for the wildlings to know their comings and goings. Sometimes sending a larger force to one of the abandoned castles for a fortnight or a moon's turn as well[6].

Lord Commander Jeor has Jon Snow named his steward to groom him for command. When he informs Jon of his father's supposed treachery, he has him watched.[7]

After the discovery of two missing rangers near the Wall, Lord Commander Mormont has their dead bodies brought back to Castle Black for further inspection. During the night, the corpses (which are actually reanimated wights) attack the men of the Night's Watch, killing several men, including Ser Jaremy Rykker. Only the timely intervention of Jon Snow and his direwolf Ghost prevent one of the wights from killing Lord Commander Mormont.[8] For saving his life, Jeor gives Jon the bastard Valyrian steel sword Longclaw.[9]

With missing rangers, the dead walking, reports of abandoned wildlings villages, huge fires in the night, and Mance Rayder the King Beyond the Wall gathering his people, Jeor decides to lead a large expedition beyond the Wall to discover what's going on and to search for Benjen Stark. He takes three hundred men from the wall and marches north.[11] At Craster's Keep, Jeor learns that Mance Rayder is gathering his people at the Frostfangs, preparing to launch an assault on the Wall. Jeor leads the expedition to the Fist of the First Men, a good defensive position located on Mance's only route to the Wall, and sends out three scouting parties to gather info. 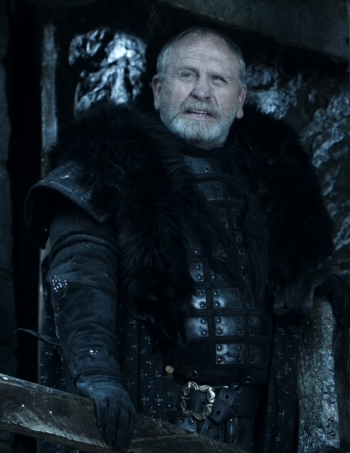 While awaiting the return of the final scouting party, the Night's Watch is assaulted on the Fist of the First Men by wights. The Night's Watch force is broken and Mormont leads the survivors back to Craster's Keep, where Mormont was killed by his own men during a mutiny.[12]