From A Wiki of Ice and Fire
Revision as of 16:38, 21 October 2022 by Abjiklam (talk | contribs)
(diff) ← Older revision | Latest revision (diff) | Newer revision → (diff)
Jump to: navigation, search
Not to be confused with Johanna Lannister.

Joanna Lannister was a member of House Lannister who became Lady of Casterly Rock, the wife of Lord Tywin Lannister, and the mother of Cersei, Jaime and Tyrion.[3] She died giving birth to Tyrion in 273 AC.[4]

Joanna's father, Ser Jason, was the younger brother of Tytos Lannister, Lord of Casterly Rock. She had one older sibling, Damon, a son from her father's first marriage, and five younger siblings (three brothers, two sisters), the eldest of whom was Stafford. She also had an older bastard sister, Lynora.[5][6] Tywin Lannister, the eldest son of Lord Tytos, met his cousin Joanna at Casterly Rock while they were children.[2]

Joanna went to King's Landing in 259 AC, for the coronation of King Jaehaerys II Targaryen, and remained as a lady-in-waiting for the future queen, Princess Rhaella Targaryen. There were rumors that Joanna gave her maidenhead to Prince Aerys the night of Jaehaerys's coronation, and that she briefly became Aerys's paramour after he ascended the Iron Throne. However, Grand Maester Pycelle insists these tales are baseless, as Tywin would not have married Joanna if they were true, "for he was ever a proud man and not one accustomed to feasting on another man's leavings."[2]

Joanna married her first cousin, Tywin, now serving as Aerys's Hand of the King, in 263 AC in a lavish ceremony in the Great Sept of Baelor.[7] On their wedding day, the oft-grim Tywin smiled, a rare occurrence.[8] At the wedding feast, Aerys drunkenly japed about how it was a pity the first night tradition was banned, and he took certain "unwonted liberties" with Joanna in the bedding ritual when the men at the feast had to disrobe the bride.[9][2]

Not long thereafter, Joanna was dismissed by Queen Rhaella Targaryen from her service in King's Landing. While Rhaella turned a blind eye towards most of her husband's infidelities, she did not approve when it concerned one of her own ladies, several of whom were sent away from court. Joanna departed for Casterly Rock at once, and she seldom visited the capital afterwards.[2]

Joanna's marriage to Tywin was reportedly a happy one, and she became Tywin's trusted counselor and companion. Her influence on her husband was such that people say that Tywin ruled the Seven Kingdoms as Hand,[4] "but was ruled at home by his lady wife."[10] 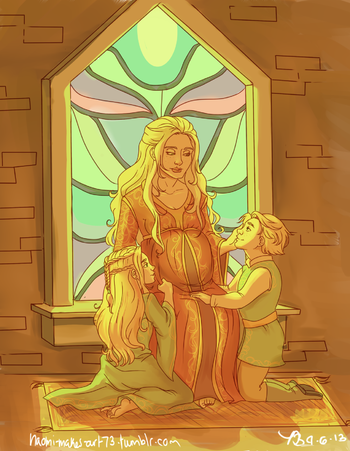 A pregnant Joanna with her children, Cersei and Jaime, by Naomimakesart

In 266 AC, Joanna gave birth to Cersei and Jaime, with Tywin present. King Aerys ordered Tywin to bring Joanna and the children to King's Landing when the children were old enough to travel, but Lord Tytos Lannister died before this could occur. Instead, Tywin, Aerys, Prince Rhaegar, and half the court went to the westerlands in 267 AC, where they remained for most of the next year.[2]

Joanna attended the Anniversary Tourney in King's Landing in 272 AC, held to celebrate Aerys's tenth year on the Iron Throne. Aerys insulted Joanna by asking her if nursing her children had ruined her breasts, and the king refused the outraged Tywin's resignation the next day.[2]

At some point within the next year, Joanna's servant caught Jaime and Cersei together, engaged in some kind of sexual activity. Joanna sent the maid away, moved Jaime's chamber to the other side of Casterly Rock, and put a guard outside of Cersei's chamber. She then warned her twins that they must never do such a thing again, or else she would be forced to tell their father.[11]

During her time as Queen Rhaella's lady-in-waiting, Joanna had befriended the Princess of Dorne, another member of the court.[10] The Dornish Princess had two children, Oberyn and Elia Martell, who were not yet promised in marriage, so the two women planned to have their children be wed to each other.

In 273 AC, Joanna died birthing her youngest son, the dwarf Tyrion, while the Martells were on their way to Casterly Rock. Once confronted on the subject, Tywin bluntly refused all the offers (Jaime wed to Elia, Cersei wed to Oberyn, or both), and instead offered newborn Tyrion for Elia, an offer meant to be insulting.[10]

Tywin seldom spoke of his wife, but he was greatly saddened by her death[4] and never remarried. Tywin has since blamed Tyrion for Joanna's death.[12] A brother, Kevan, later took over Joanna's role as Tywin's most trusted counselor.[13] 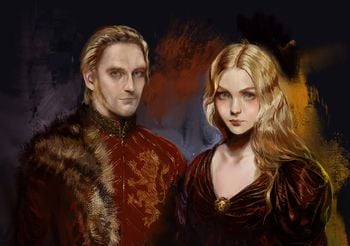 One of Cersei's dromonds is named Lady Joanna to honor the queen's mother.[16]

During the siege of Riverrun, Ser Jaime Lannister dreams and sees a woman he barely recognizes. At first, he believes her to be his sister, Cersei, but then realizes it is his mother. She asks if he will forget his father like he has forgotten her. She talks about the future that Tywin had wanted for his children: his son a knight and his daughter a queen. She cries when Jaime replies that they have indeed become that.[17]


Tywin: You ask that? You, who killed your mother to come into the world? You are an ill-made, devious, disobedient, spiteful little creature full of envy, lust, and low cunning. Men's laws give you the right to bear my name and display my colors, since I cannot prove that you are not mine. To teach me humility, the gods have condemned me to watch you waddle about wearing that proud lion that was my father's sigil and his father's before him. But neither gods nor men shall ever compel me to let you turn Casterly Rock into your whorehouse.[12]
—Tywin Lannister and Tyrion Lannister

Lord Tywin seldom spoke of his wife, but Tyrion had heard his uncles talk of the love between them. In those days, his father had been Aerys's Hand, and many people said that Lord Tywin Lannister ruled the Seven Kingdoms, but Lady Joanna ruled Lord Tywin.[4]

He was not the same man after she died, Imp. The best part of him died with her.[4]

Daenerys: And my father? Was there some woman he loved better than his queen?


Barristan: Not ... not loved. Mayhaps wanted is a better word, but ... it was only kitchen gossip, the whispers of washerwomen and stableboys ...
Daenerys: I want to know. I never knew my father. I want to know everything about him. The good and ... the rest.


Barristan: As you command. Prince Aerys ... as a youth, he was taken with a certain lady of Casterly Rock, a cousin of Tywin Lannister. When she and Tywin wed, your father drank too much wine at the wedding feast and was heard to say that it was a great pity that the lord's right to the first night had been abolished. A drunken jape, no more, but Tywin Lannister was not a man to forget such words, or the ... the liberties your father took during the bedding.[9]
—Daenerys Targaryen and Barristan Selmy

Only Lady Joanna truly knows the man beneath the armor, and all his smiles belong to her and her alone. I do avow that I have even observed her make him laugh, not once, but on three separate occasions![2]

—Pycelle reporting to the Citadel

With her death, Grand Maester Pycelle observes, the joy went out of Tywin Lannister, yet still he persisted in his duty.[7]