Jojen Reed is a member of House Reed. He is Lord Howland Reed's only son and Meera Reed's younger brother. Jojen has greensight, the power of prophetic green dreams. In the television adaptation Game of Thrones, Jojen is portrayed by Thomas Brodie-Sangster.

Jojen is short and slim with unusually deep green eyes, wearing green-colored clothing.[6] He is barely an adolescent when he arrives at Winterfell, but his gravity and mature personality make him seem older.[2] He knows a number of arcane things that he gleans from his dreams, including the day of his death.[1]

In his childhood Jojen nearly died of greywater fever. While he was near death, he was visited by a three-eyed crow that gave him the gift of greensight, causing him to experience prophetic dreams known as greendreams. One such dream involved a chained wolf that the three-eyed crow was trying to free from a chain. When Jojen told his father, Howland Reed, about the dream, Lord Howland sent him and his sister Meera to Winterfell.[1]

Even though he experiences greendreams, Jojen is not a greenseer as, lacking the abilities of a warg, he can not commune with weirwood trees. 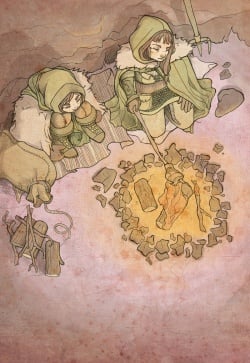 Jojen and Meera, on their way to Winterfell - by mustamirri ©

In the middle of the harvest feast at Winterfell, Jojen and his sister Meera arrive to pledge the Reeds' support to Winterfell and King Robb Stark after Lord Eddard Stark's death. Jojen asks about the Direwolves, wanting to see them and is told they are in the godswood. The boy is not afraid of them, telling Bran and Meera that it is not the day he will die.[6]

Meera reveals that Jojen has the greensight and that they were sent to Winterfell by their father, Howland Reed, after hearing about Jojen’s dreams. Jojen explains he has dreamed of a winged wolf and a three-eyed crow who lives beyond the Wall. Jojen does not panic when the direwolves become aggressive, but follows Meera's command to climb a weirwood to escape them. After Jojen's green dreams are discounted by Maester Luwin, Meera tells Bran of one of Jojen’s green dreams:

You were sitting at supper, but instead of a servant, Maester Luwin brought you your food. He served you the king’s cut off the roast, the meat rare and bloody, but with a savory smell that made everyone’s mouth water. The meat he served the Freys was old and grey and dead. Yet they liked their supper better than you liked yours.[1]

Later Bran learns from Luwin of Robb Stark's victory over Ser Stafford Lannister in the Battle of Oxcross, and the death of Ser Stevron Frey. While Bran is happy for the victory, he knows that only Lord Tywin Lannister matters. In contrast, neither "Big" Walder or "Little" Walder seem bothered by their uncle Stevron's death. Because they are more concerned about the Frey line of succession than Stevron's death, the maester tells them that they should be ashamed.[3]

I dreamed that the sea was lapping all around Winterfell. I saw black waves crashing against the gates and towers, and then the salt water came flowing over the walls and filled the castle. Drowned men were floating in the yard. When I first dreamed the dream, back at Greywater, I didn’t know their faces, but now I do. That Alebelly is one, the guard who called our names at the feast. Your septon's another. Your smith as well.[3]

Bran, confused and dismayed, responds that the sea is far away and Winterfell has high walls, but Jojen insists the sea will flow over the walls. Bran tells Jojen about his own dreams of the three-eyed crow and his dreams of falling. Jojen tells him he is a warg, and that he is powerful but will not fly unless he opens his third eye. Jojen also warns Bran not to tell anyone because people will fear him. Bran tries to warn others, but mostly the dream of the sea is dismissed.[3]

Ser Rodrik Cassel returns with a prisoner who was involved in the forced marriage and then murder of Lady Donella Hornwood. Jojen reveals he has seen the bodies of Bran and Rickon at the feet of the man they call Reek and he is skinning off their faces with a knife. Meera states that she could kill Reek, but Jojen tells her she would not succeed.[3]

When Theon Greyjoy takes Winterfell, Bran is lead out of his room where he meets Meera and Jojen, who have also been taken captive.[7] Alebelly,[7] Septon Chayle,[8] and Mikken[7] are slain by the ironborn as Jojen had foreseen in his green dream. The Stark and Reed children later fake an escape with Osha and Hodor, however, and hide in the crypts of Winterfell.[9] Unable to find them, Theon and "Reek" murder a pair of miller's boys and present their flayed bodies as Bran and Rickon to the people of Winterfell.[8][10]

When Jojen and his companions emerge from Winterfell's crypts they find that the castle has been burned and its people killed. In the godswood the dying Luwin advises Osha to split the Stark children. Osha decides to take Rickon with her south and Jojen says that they will take Bran. After they separate, Meera, Hodor and Bran travel north upon Jojen's recommendation.[9] 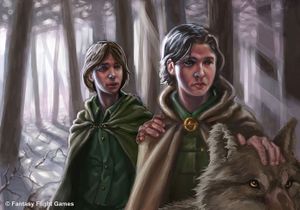 When Bran wakes from a wolf dream while in the ruins of Tumbledown Tower, Jojen, who was nicknamed "little grandfather" by Old Nan because of his solemnity, warns Bran against spending too much time as the wolf Summer. It is dangerous for them to travel in the North and Bran will not learn about his gifts while remaining at the tower. After considering seeking refuge with House Stark's bannermen, Bran tells the Reeds he wants to fly, and to take him to the three-eyed crow.[2]

As they move north, Jojen insists that they keep away from roads because roads have travelers that will spread tales about a giant, a cripple boy and a wolf. Summer finds them a cave where they find a Liddle who shares his food and warns the kingsroad has become dangerous. When he states things were different when there was a Stark in Winterfell, Jojen tells him that the wolves will be back. In the morning the man is gone, but he left some food for them.[11]

They arrive at a village in disrepair in the New Gift: the most substantial building, the inn, only has a few walls still standing. They take refuge from a storm in Queenscrown, the holdfast in the middle of the lake, but they detect men in the village, one of whom turns out to be Jon Snow traveling with wildlings. Bran possesses Summer and attacks the wildlings going after Jon. Summer kills three of them, but takes an arrow to the shoulder. The group waits until the next day to leave after the wildlings are gone.[12][13]

They arrive at the Nightfort, the castle in Jojen’s green dream, but they cannot figure out how to get across the wall. They decide to sleep that night in the kitchen because it would provide some protection. As they go to sleep, Jojen states that maybe he will have a green dream to show him the way. When they hear something coming from a well, Meera traps it in her net and sticks him with her frog spear. When the fire is stoked up they see a girl, Gilly, with a baby and Samwell Tarly. Sam tells him that they came through the Black Gate, a passage as old as the wall. Sam will have to take them back because only a man sworn to the Night's Watch can open the gate. Sam explains his group was aided by Coldhands, who was dressed in the black of the Nights Watch, but pale. Coldhands did not come because he cannot pass beyond the Wall as there are spells woven into it. Meera, Jojen, Hodor and Bran go through the Black Gate.[14]

Jojen falls into a resigned depression, wanting to go home to Greywater Watch. Meera implies while speaking with Bran that Jojen has had a greendream of his fate when he goes to Greywater Watch, and that Jojen isn't willing to try and fight his fate, reasoning that the greendreams do not lie. Meera's reaction to this conversation implies that a return back home for Jojen might have unpleasant consequences.[17]

I dreamed of the man who came today, the one they call Reek. You and your brother lay dead at his feet, and he was skinning off your faces with a long red blade.[3]