One of the unresolved issues in the books is the identity of Jon Snow's mother. 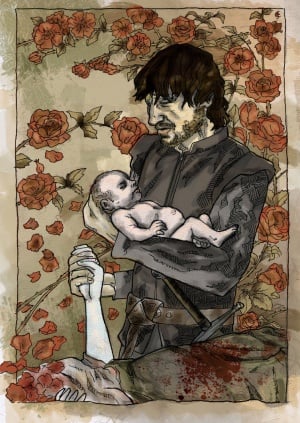 Speculation on what promise Ned gave. By Cris Urdiales ©

Many readers believe that Jon is not the son of Eddard Stark. Instead, he is the son of Prince Rhaegar Targayen and Eddard's sister Lyanna. Rhaegar and Lyanna disappeared together to the Tower of Joy early in Robert's Rebellion. There, it's believed, Rhaegar leaves a pregnant Lyanna to defend his family's dynasty.

At the end of Robert's Rebellion, about one year later, Eddard and his companions find three of the Kingsguard at the Tower of Joy: Lord Commander Ser Gerold Hightower, Ser Oswell Whent, and Ser Arthur Dayne. The reasons for their presence and the ensuing fight are unknown, but defending the unborn son of the Heir Apparent would be a good reason to have been posted. The only known survivors of the fight were Eddard himself and Howland Reed. Eddard recalls his sister dying "in a bed of blood," where he made her an unknown promise just before she died.

Also, while Robb, Sansa, Bran and Rickon are said to have Tully features (hair color, eyes), Jon and Arya are said to be closer in appearance (which had made Sansa believe Arya was also a bastard like Jon, until her mother put Sansa's theory down). Arya is said to resemble Lyanna.

Further evidence to the truth of this theory in the eighth Eddard chapter of A Game of Thrones, in which Ned contemplates the significance of King Robert's bastards. As he muses, Ned's thoughts drift to Jon Snow, a logical segue, but also to his sister Lyanna, the promise he made her, and to Rhaegar Targaryen, implying some tacit link between the three individuals.[1]

Daenerys Targaryen's visions in the House of the Undying include an image of Rhaegar with his newborn son Aegon, proclaiming that "there must be a third" because "the dragon has three heads". Given that, according to Jon Connington, Rhaegar's wife Elia was believed infertile after two difficult pregnancies, it is logical for Rhaegar to have attempted to fulfill prophecy by having a third child with another woman.

With Eddard beheaded by King Joffrey, Howland Reed is the only living person who knows the nature of Lyanna's death and what she made her brother promise.

Another theory claims Jon's mother was Ashara Dayne, his father being likely Eddard Stark or his older brother Brandon Stark. Lady Dayne was said to be with both of them during the Tourney at Harrenhal. According to Ser Barristan Selmy, one of the Starks bedded her at the tournament and got her with child. It was also known by many that she was pregnant before she killed herself by jumping from the tower of Starfall, also called the Palestone Sword, a tower on Starfall's cliff by the sea.

Though Ser Barristan believes the bastard child of Lady Dayne was a stillborn girl, some still believe Ashara Dayne to be the mother of Jon Snow. Among those who believe so is Queen Cersei Lannister. Lady Catelyn Stark also heard this rumor, but Eddard refuses to answer her when she asks if Ashara Dayne was Jon's mother.

Wylla, the wet nurse at Starfall, is another possible mother. According to King Robert Baratheon, he recalls Ned bedding a wench during the Rebellion. On their way down the Kingsroad from Winterfell, he tries to recall her name, calling her, "Your bastard's mother." Ned says her name was Wylla, but refuses to talk more about it.

Lord Edric Dayne also claims Wylla is Jon's mother. He recounts to Arya Stark that he was a milk-brother to Jon Snow since Edric was nursed as a baby by Wylla.

Lord Godric Borrell recounts to Davos Seaworth about a fisherman and his daughter who brought Ned Stark in secret across the Bite to the North at the beginning of Robert's Rebellion. The fisherman died in a storm that almost short-ended their journey, but his daughter continued and successfully saw Ned to the Sisters before the boat went down. If Lord Borrell is to be believed, Ned left her with a bag of silver and a bastard in her belly, which she named Jon Snow after Lord Jon Arryn.