Ser Jorah Mormont is an exiled knight, the former head of House Mormont and lord of Bear Island. He fled Westeros to escape execution for trading in slaves, and entered the service of the last Targaryens. He becomes one of the most trusted companions of Daenerys Targaryen.

Jorah is middled-aged big man.[2] He is balding, but still strong and fit.[3] He is swarthy and very hairy.[4] Daenerys considers him not particularly handsome.[5]

When Jorah matured, his father joined the Night's Watch in order to give Jorah the lordship of House Mormont. Jorah's first wife, a member of House Glover, miscarried three times and died after the third during their nearly ten years of marriage. Jorah fought in the Greyjoy Rebellion and received a knighthood for his bravery, being one of the first men through the breach during the siege of Pyke. After a tournament held in Lannisport to celebrate the victory, he met Lynesse Hightower and was immediately smitten by her, asking to wear her favor in the tournament. He won an improbable victory and named her Queen of Love and Beauty. That night, he asked Lord Leyton for her hand, and he acquiesced. They were happy until they got back to his keep on Bear Island, which Lynesse considered a miserable hovel. He spent large sums of money trying to keep her happy and ended up penniless. In order to raise funds he sold a few poachers to some Tyroshi slavers. This was a crime in the North, which led Eddard Stark to condemn him to death. Rather than join his father in taking the black or dying, Jorah fled to Lys with Lynesse, where he tried to make his living as a sellsword. He was unable to provide for Lynesse, and she soon left him while he was fighting the Braavosi on the Rhoyne.[6] 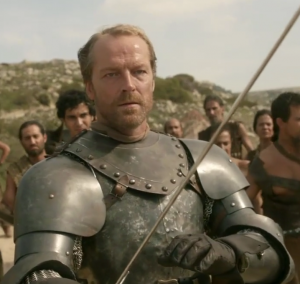 In Pentos, Viserys Targaryen noticed Jorah at the party celebrating the engagement of his sister, Daenerys Targaryen, to Khal Drogo and took him into his service. Hoping to earn a royal pardon, Jorah secretly reported all of the Targaryens' movements to Varys. He was present at Viserys "crowning" and urged Daenerys to look away before her brother's death occured. Jorah began to admire Daenerys courage and stopped the assassination attempt upon Daenerys by a wineseller. He stayed loyal to her when Khal Drogo was near death and slew the Khal's Bloodrider Qotho in single combat. He was present at the birth of her Dragons and swore her his sword and claimed her as his Queen.

Jorah began to fall in love with the beautiful young Daenerys and eventually stopped sending reports.[7] He sent his last report from Qarth. He visited the docks on her behest and attempted to find a ship to take them to Westeros. An attempt is made on Daenerys' life by a Sorrowful Men assassin but is thwarted by an unknown stranger. The stranger introduces himself as Arstan Whitebeard along with Strong Belwas who came on behest from Illyrio Mopatis to take them all back to Pentos. They brought three ships with them. Jorah, however, is distrustful of Whitebeard.

Ser Jorah finally made his move on Daenerys, kissing her when they were alone in the Cabin of the ship. He proclaimed his love repeatedly and suggested that they marry, but she always refused. It was Jorah who suggested they sail for Slavers bay to buy Unsullied. He commanded her army to victory against the Yunkai.

When "Arstan Whitebeard" was revealed to be Barristan Selmy, he revealed Jorah's early betrayal to Daenerys. Ser Jorah pleaded with his queen for forgiveness, and Daenerys decided to send them both on a dangerous mission into the sewers of Meereen as punishment and a chance for redemption.[8] The mission succeeded, but Jorah continued to insist that he had done nothing wrong. Daenerys could not forgive him as she did Ser Barristan, and she banished Jorah from her service, swearing to kill him if she saw him again. Crushed by her rejection, Jorah left.

While in a brothel in Volantis, Jorah hired a beautiful whore with silver hair and he later spotted the dwarf Tyrion Lannister, taking him prisoner. Ser Jorah planned to bring Tyrion to Daenerys to regain her favor and forgiveness. He arranged passage to Meereen with the help of the Widow of the waterfront. During the journey, a dwarf woman named Penny joins the pair as they travel to Meereen to reach Daenerys. However, the ship is captured by slavers and the trio are bought at auction outside Meereen by Yezzan zo Qaggaz. Upon being captured and enslaved by the Yunkai, the slavers had a demon's face tattooed on Mormont's cheeks, to show him as an unruly and fierce slave.

Brown Ben Plumm attempted to buy Ser Jorah so he could present his head as a "wedding gift" to Daenerys but was outbid as was Zahrina, a Yunkai slaver who purchased slaves to die in the fighting pits. Ser Jorah was devastated when he learned Daenerys is remarried.

After Qaggaz died of "The Pale Mare", the trio escapes. Tyrion arranged for the three to join the sellsword company the Second Sons, under the command of Brown Ben Plumm. Mormont stated to Tyrion Lannister that they needed to bring the Second Sons back over to the side Meereen as the Yunkai had lost the war, they just didn't know it yet. Tyrion agreed.

The common people pray for rain, healthy children, and a summer that never ends. It is no matter to them if the high lords play their game of thrones, so long as they are left in peace. They never are. [10]