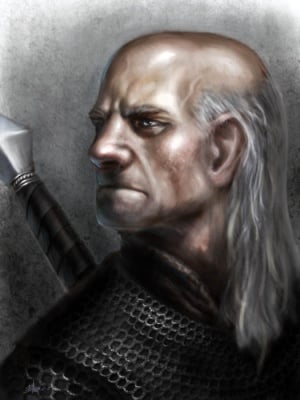 The King's Justice is the royal headsman of the Iron Throne.[1]

In the wake of King Maegor I Targaryen's death and the arrival of Prince Jaehaerys to the Red Keep, the King's Justice was arrested and put in the black cells.[6] After reaching the age of majority and claiming his rule for himself, King Jaehaerys I replaced the King's Justice, among other lesser offices.[7]

During the Dance of the Dragons, after Ser Otto Hightower was dismissed as Hand of the King and replaced with Ser Criston Cole, all the captive blacks— who had once sworn to defend the rights of Princess Rhaenyra Targaryen and refused to bend the knee of Aegon II Targaryen—were dragged one by one before the King's Justice at the Red Keep's yard. Each man was given one final chance to swear fealty to Aegon. The King's Justice beheaded Lords Hayford, Merryweather, Harte, Buckler, and Caswell, as well as Lady Fell, eight landed knights, and twoscore servants and retainers.[8]

When Orwyle, the former Grand Maester, was captured in early 132 AC during the regency of Aegon III, the Hand of the King, Ser Tyland Lannister, repeatedly postponed his execution, pointing out that the office of King's Justice remained empty since the end of the Dance.[9] Tyland's successor, Lord Unwin Peake, appointed Ser Victor Risley, the Knight of Risley Glade, as the King's Justice in 133 AC.[10]

On the Feast Day of Our Father Above in 133 AC, the gaols and dungeons of King's Landing were emptied, and each prisoner was publicly executed by the King's Justice, with the aid of Tessario and his Fingers. Among those executed by the King's Justice were a "Shepherd Reborn", a Pentoshi merchantman accused and found guilty of bringing the Winter Fever from Sisterton to King's Landing, and Orwyle.[10]

Victor was arrested in 135 AC, following the confession of Lord George Graceford, which implicated him in the attempt to overthrow power in the secret siege amid the Lysene Spring. In 136 AC, Victor was condemned to die, but demanded a trial by battle, in which he was killed by Ser Gareth Long.[11]

Ser Ilyn Payne was appointed as the King's Justice when King Robert I Baratheon married Cersei Lannister. His appointment was a gift from Robert to Lord Tywin Lannister, the father of his new bride, a sinecure to compensate Ilyn for the tongue he lost while in service to House Lannister during the reign of King Aerys II Targaryen.[1]

Lord Eddard Stark, the Hand of the King for Robert I Baratheon, sends Lord Beric Dondarrion to hunt down Ser Gregor Clegane. According to Lord Varys, Ser Ilyn Payne, the King's Justice, looked displeased at not having been chosen.[2]

King Joffrey I Baratheon orders Ilyn to execute Eddard at the Great Sept of Baelor.[12] During the Battle of the Blackwater, Queen Regent Cersei Lannister has Ser Ilyn Payne remain with her in the Queen's Ballroom of Maegor's Holdfast in the Red Keep,[13] in order to kill Cersei and her captive, Sansa Stark, should the Red Keep fall to Stannis Baratheon.[14] When Osfryd Kettleblack informs Cersei that a groom and two maidservants where caught trying to flee the Red Keep with three of the king's horses, she has the King's Justice execute them and place their heads on pikes outside the stables.[14]

In the throne room following the battle, Joffrey orders Ilyn to behead a defiant Florent bastard who refuses to renounce Stannis Baratheon and the Lord of Light.[15]

Ser Jaime Lannister demands the services of Ser Ilyn Payne from Queen Regent Cersei Lannister as his condition for leading the expedition to Riverrun;[1] Cersei acquiesces as she blames the King's Justice for the the escape of Tyrion Lannister from the dungeons.[5]

In King's Landing, Cersei Lannister suggests that she will have to appoint a new King's Justice due to Ser Ilyn's absence, in order to execute Margaery Tyrell, whom Cersei hopes to charge with treason.[16]

If the wicked do not fear the King's Justice, you have put the wrong man in the office.[17]

From the shadows at the back of the hall, Ser Ilyn Payne appeared. The specter at the feast, thought Tyrion as he watched the King's Justice stride forward, gaunt and grim.[18]