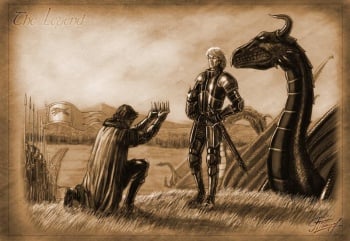 Torrhen Stark yields to Aegon the Conqueror by kneeling before him. 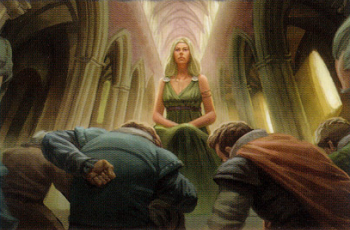 Men loyal to Queen Daenerys Targaryen kneel in front of her. © FFG

Kneelers are what the free folk call those who live in the Seven Kingdoms south of the Wall. They consider it a derogatory term, as kneeling is a position of submission.

Beyond the Wall the free folk kneel for no man, while kneelers are subject to lords and kings. The free folk view the kneelers as lacking freedom,[1][2] whereas the people of the Seven Kingdoms view the "wildlings" as savage, lawless, and primitive killers, rapists, and thieves.[3]

I know your kneeler's knees must be itching, for want of some king to bend to.[4]

You call us thieves, but at least a thief has t' be brave and clever and quick. A kneeler only has t' kneel.[1]

When your enemies defy you, you must serve them steel and fire. When they go to their knees, however, you must help them back to their feet. Elsewise no man will ever bend the knee to you.[5]

The free folk despise kneelers. Let them keep their pride, and they will love you better.[6]

No man has ever died from bending his knee. He who kneels may rise again, blade in hand. He who will not kneel stays dead, stiff legs and all.[7]

Kneelers. Their lordly lord spoke, they must obey.[8]