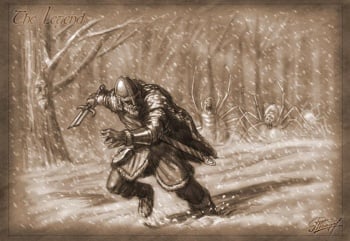 The last hero of the First Men lived during the Long Night according to Westerosi legends. It is unknown if there is a connection with Azor Ahai, a person who saves the world from the darkness in legends from Essos.

Legends of the north state the last hero and his companions went in search of the children of the forest during the Long Night, thousands of years ago. The only survivor of the company after attacks from giants, wights, and Others, the last hero eventually reached the children and gained their assistance. The Night's Watch then formed and won the Battle for the Dawn. This ended the generation-long winter and sent the Others into retreat,[1] possibly to the Land of Always Winter. The fate of the last hero is unknown.

The tale of the last hero is told by Old Nan to Bran Stark:

Oh my sweet summer child … What do you know of fear? Fear is for the winter, my little lord, when the snows fall a hundred feet deep and the ice wind comes howling out of the north, when the sun hides it face for years at a time, and little children are born and live and die all in darkness while the direwolves grow gaunt and hungry, and the white walkers move through the woods.

The Others … Thousands and thousands of years ago, a winter fell that was cold and hard and endless beyond all memory of man. There came a night that lasted a generation, and kings shivered and died in their castles even as the swineherds in their hovels. Women smothered their children rather than see them starve, and cried, and felt their tears freeze on their cheeks.

In that darkness, the Others came for the first time … They were cold things, dead things, that hated iron and fire and the touch of the sun, and every creature with hot blood in its veins. They swept over holdfasts and cities and kingdoms, felled heroes and armies by the score, riding pale dead horses, and leading hosts of the slain. All the swords of men could not stay their advance, and even maidens and suckling babes, found no pity in them. They hunted the maids through the frozen forests, and fed their dead servants on the flesh of human children.

Now these were the days before the Andals came, and long before the women fled across the narrow sea from the cities of the Rhoyne, and the hundred kingdoms of those times were the kingdoms of the First Men, who had taken those lands from the children of the forest. Yet here and there in the fastness of the woods, the children still lived in their wooden cities and hollow hills, and the faces in the trees kept watch. So as cold and death filled the earth, the last hero determined to seek out the children, in the hopes that their ancient magics could win back what the armies of men had lost. He set out into the dead lands with a sword, a horse, a dog, and a dozen companions. For years he searched until he despaired of ever finding the children of the forest in their secret cities. One by one his friends died, and his horse, and finally even his dog, and his sword froze so hard the blade snapped when he tried to use it. And the Others smelled the hot blood in him and came silent on his trail, stalking him with packs of pale white spiders big as hounds –[2]

Old Nan is then interrupted by Maester Luwin.[2]

At Castle Black Samwell Tarly tells Jon Snow that he found one account of the Long Night that spoke of the last hero slaying Others with a blade of dragonsteel. Supposedly they could not stand against it. Jon wonders if dragonsteel refers to Valyrian steel.[3]