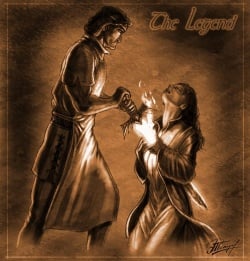 Hyrkoon the Hero, with Lightbringer in hand, leads the virtuous into battle, as depicted by Jordi Gonzales Escamilla in The World of Ice & Fire.

Lightbringer is the sword of Azor Ahai, a legendary hero who is prophesied to fight the Great Other. Lightbringer is thought to be a sword made of living fire. It is also known as the Red Sword of Heroes.[1]

The Legend of Lightbringer

Darkness lay over the world and a hero, Azor Ahai, was chosen to fight against it. To fight the darkness, Azor Ahai needed to forge a hero's sword. He labored for thirty days and thirty nights until it was done. However, when he went to temper it in water, the sword broke. He was not one to give up easily, so he started over. The second time he took fifty days and fifty nights to make the sword, even better than the first. To temper it this time, he captured a lion and drove the sword into its heart, but once more the steel shattered. The third time, with a heavy heart, for he knew before hand what he must do to finish the blade, he worked for a hundred days and nights until it was finished. This time, he called for his wife, Nissa Nissa, and asked her to bare her breast. He drove his sword into her breast, her soul combining with the steel of the sword, creating Lightbringer, while her cry of anguish and ecstasy left a crack across the face of the moon.[1]

According to the Jade Compendium, since that day the sword became as warm as Nissa Nissa was and burned fiery hot during battles. Lightbringer was able to boil the blood of a monster when Azor Ahai thrust the sword through the belly of the beast. After steam poured from the beast's mouth and its eyes melted, its body burst into flame.[2]

It has been foretold in the books at Asshai that when the stars bleed and the cold winds blow, a warrior shall draw from the fire a burning sword. That sword will be Lightbringer. The one who draws it will be Azor Ahai reborn.[1]

Under the direction of Melisandre, Stannis Baratheon attempted to take the mantle of Azor Ahai by plunging a sword into a pyre of burning relics of the Seven. When he pulled the sword out, it glowed with a magical light, but close inspection revealed that the sword was not actually hot.[1]

The sword has a great square-cut ruby set in the hilt.[3]

According to Maester Aemon, the real Lightbringer both shone and radiated heat.[4]

Stannis, that’s a very pretty sword, I’ll grant you, but I think the glow off it has ruined your eyes.

That sword was not Lightbringer, my friend.