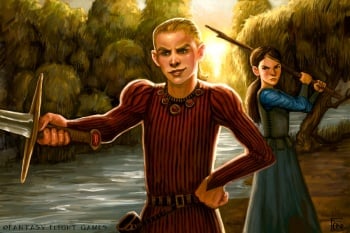 Lion's Tooth is the sword of Prince Joffrey Baratheon.

Lion's Tooth is a longsword proportioned to fit a twelve-year-old boy, made of gleaming blue steel, castle-forged and double-edged, with a leather grip and a gold lion's-head pommel.[1]

While out riding with Sansa Stark, Prince Joffrey Baratheon comes across Arya Stark and a common boy, Mycah, playing at swords with wooden sticks. He threatens Mycah and cuts his cheek, which leads Arya to attack the prince with her stick. Joffrey then threatens Arya with his sword, slashing at her, until Nymeria bites him to protect her. Arya throws Lion's Tooth into the Trident.[1]

When Arya is questioned at Darry, Renly Baratheon laughs at Joffrey being disarmed by the girl, as well as at the sword's name.[2]

Now king, Joffrey receives a replacement sword, Hearteater. Sansa recalls how Arya had thrown Lion's Tooth in the river, and she hopes that Stannis Baratheon will do the same with Joffrey's new sword.[3]

Within the hollow hill, Arya misremembers the sword's name as "Lion's Paw".[4][N 1]

Joffrey receives Widow's Wail as a present before his wedding with Margaery Tyrell, and Sansa remembers his previous swords, Lion's Tooth and Hearteater.[6]

Have no fear, lady. I am almost a man grown, and I don't fight with wood like your brothers. All I need is this. I call it Lion's Tooth.[1]

Perchance later you'll tell me how a nine-year-old girl the size of a wet rat managed to disarm you with a broom handle and throw your sword in the river.[2]