Prince Lucerys Velaryon, also known as Luke, was the secondborn son of Princess Rhaenyra Targaryen and her first husband, Ser Laenor Velaryon. He was a dragonrider whose dragon was Arrax.[2]

Luke was a strong strapping lad, skilled in arms. Like his brothers Jacaerys and Joffrey, he had brown eyes and hair, and a pug nose. This made many at court suspect that Ser Harwin Strong was their true father.[1][3] 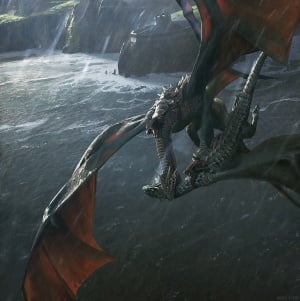 Prior to the Dance of the Dragons Lucerys had long served as a squire. He was thirteen years old at the start of the civil war.

Luke was sent on a mission that was considered shorter and safer than his brother Jacaerys's, flying on Arrax as a messenger to Storm's End where it was expected that Lord Borros Baratheon would give him a warm welcome. Prior to his mission he swore on the Seven-Pointed Star to his mother on Dragonstone that he would take no part in fighting.

Lucerys was escorted back to the castle yard where Arrax waited amidst a terrible storm. In the Round Hall, Borros granted Aemond's request to leave. Arrax was struggling to stay aloft as Aemond mounted Vhagar and went after Luke. Arrax was younger and swifter, and on a calm day might have been able to outfly his pursuer, but the weather impeded him and Vhagar was five times the size of her foe and the hardened survivor of a hundred battles.

The two dragons met above Shipbreaker Bay. According to Archmaester Gyldayn, if there was a fight it could not have lasted long. Arrax fell, broken, to be swallowed by the storm-lashed waters of the bay. His head and neck washed up beneath the cliffs below Storm's End three days later. Prince Lucerys's corpse washed up as well.

On Dragonstone, Rhaenyra collapsed when told of his death and Luke's younger brother Joffrey swore an oath of vengeance against Aemond and Borros. Prince Daemon Targaryen avenged Luke's death by sending "Blood and Cheese" to assassinate one of Aegon II's sons.[4]

Our uncle calls us Strongs, and claims we are bastards, but when the lords see us on dragonback they will know that for a lie. Only Targaryens ride dragons.[2]

An eye for an eye, a son for a son. Lucerys shall be avenged.[4]