Luwin is a maester in the service of House Stark at Winterfell.[1] In the television adaptation Game of Thrones he is portrayed by Donald Sumpter.

A tireless maester,[2] Luwin is a small grey man with grey eyes and thinning hair.[3][4] He wears a robe of grey wool with voluminous sleeves. In the sleeves are sewn pockets, from which Luwin is always drawing things.[3] His maester's collar is a simple choker,[5] and he often tugs at the chain around his neck when he is uncomfortable.[4] His turret at Winterfell is always so cluttered that it seems to Bran Stark a wonder that Luwin ever finds anything. He owns a bronze far-eye from Myr.[6]

Luwin is one of the few maesters who have bothered to earn the Valyrian steel link, which signifies the study of the higher mysteries.[7] He is skeptical of hedge wizards[8] and Old Nan's stories,[9] believing that the children of the forest and giants are extinct.[6]

Presumably the replacement at Winterfell for Maester Walys, Luwin delivered all[3] of the children of Lord Eddard Stark and Lady Catelyn Tully: Robb (who was born at Riverrun),[10] Sansa, Bran, Arya, and Rickon Stark. Luwin educated the Stark children, as well as Eddard's bastard, Jon Snow, and Eddard's ward, Theon Greyjoy. For instance, he taught about maesters[11] and stars[12] to Jon, the history of the Night's Watch to Bran,[13][9] and the historical lords of Winterfell to Theon.[14] Luwin also treated Arya's cuts and scrapes.[15]

Luwin once made a boy out of pottery and threw it from Winterfell's walls to show Bran what would happen if the boy were to fall while climbing, but Bran ignored the warning.[16] 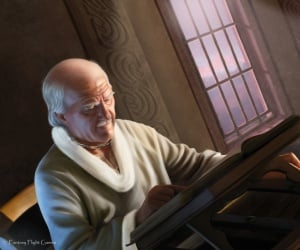 At Winterfell Maester Luwin receives and brings Catelyn Stark a letter from her sister, Lysa Arryn, saying that Queen Cersei Lannister murdered her husband, Lord Jon Arryn, the Hand of the King. After Catelyn reads the letter, Luwin joins Catelyn in urging Lord Eddard Stark to accept Lord Arryn's vacant post. The Starks decide that they must continue on as if nothing happened, with Ned continuing south with the king, Robert I Baratheon.[3]

After Bran Stark is crippled from a fall, Luwin tends to the boy and tries to aid a shocked Catelyn in administering the castle. He also treats Cat's wounds after a catspaw attacks Bran and her with a Valyrian steel dagger. Luwin is part of the group Catelyn confers with about what to do next before she leaves for King's Landing, urging caution.[17] Tyrion Lannister provides the maester with plans for a saddle for the crippled Bran,[18] and Luwin creates a wicker basket which Hodor uses to carry Bran.[6] Luwin again treats Bran's wounds after he is attacked by wildlings in the wolfswood.[19]

When Robb Stark departs south against Luwin's advice after Lord Eddard has been taken prisoner, he advises Bran to listen to the maester's counsel.[6] Once Catelyn reaches White Harbor during her return to the north, Cat sends Ser Rodrik Cassel back to Winterfell to serve as castellan and help govern with Luwin.[20]

Luwin accompanies Bran into the crypt of Winterfell, where the maester is bitten by Rickon Stark's direwolf, Shaggydog. He then discusses dragonglass, the children of the forest, and the Pact with Bran. The maester is saddened when Winterfell is informed of Eddard's execution in King's Landing.[4] 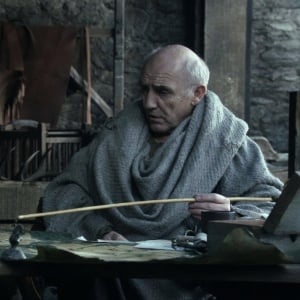 Donald Sumpter as Maester Luwin as depicted in Game of Thrones

With Robb Stark's departure, the day-to-day rule of the north falls to Rodrik and Luwin, who are acting with Bran's voice. The maester provides sleeping draughts to help Bran with his dreams.[21][7] Luwin unsuccessfully advises Bran to befriend Big Walder and Little Walder, Catelyn's new wards,[21] and the maester scolds the two Freys for bullying Hodor[22] and for not being sympathethic after the death of their uncle, Ser Stevron Frey.[23] Winterfell hosts the harvest feast, which is attended by many of the northern bannermen. Luwin and Rodrik assist Bran when he meets Lord Wyman Manderly, Lady Donella Hornwood, Mors and Hother Umber, and Leobald Tallhart.[22][24]

With Rodrik's departure to deal with Ramsay Snow, the fight over the Hornwood inheritance,[7] and Dagmer Cleftjaw threatening Torrhen's Square, governance falls completely on Luwin's shoulders. With reports of ironborn attacking the north, Luwin sends ravens to White Harbor, the barrowlands, and the wolfswood.[25]

Luwin is wounded during the capture of Winterfell by Theon Greyjoy, although he manages to send one raven to White Harbor.[25] The maester continues to serve in the ironborn-held castle, and Theon forces him to participate in the unsuccessful search for Bran and Rickon after they disappear.[26] Theon presents the bodies of two smallfolk as the Starks and refuses Luwin's request to bury "Bran" and "Rickon" in the crypts.[27]

When Rodrik gathers an army to retake Winterfell, Luwin advises Theon to surrender and join the Night's Watch, which Theon considers. Rodrik is then betrayed by Ramsay Snow in the battle at Winterfell, however. Maester Luwin is then speared and run down during the sack of Winterfell by a Bolton knight.[28] Luwin is able to crawl to the godswood of Winterfell, where he is found by Bran and his companions after they leave the crypts. As he lies dying beneath the heart tree, Luwin instructs Osha to split up Bran and Rickon. He is then given the gift of mercy by Osha after the children are led away.[29]

At Winterfell for the marriage of Ramsay to "Arya Stark", Theon notices that Luwin's ravens are living in the ruins of the maester's tower as well as in the castle's godswood.[30][14] Lord Roose Bolton brings three maesters, Henly, Medrick, and Rhodry, to tend to the ravens.[30]

Folly and desperation are ofttimes hard to tell apart.[19]

Luwin: There are some who call my order the knights of the mind. You are a surpassing clever boy when you work at it, Bran. Have you ever thought that you might wear a maester's chain? There is no limit to what you might learn.


Bran: I want to learn magic. The crow promised that I would fly.

Take a lesson, Bran. The man who trusts in spells is dueling with a glass sword. As the children did.[4]

A good lord comforts and protects the weak and helpless.[22]

The years pass in their hundreds and their thousands, and what does any man see of life but a few summers, a few winters?[7]

Sadly, no victory is without cost.[23]


Luwin: The realm. And Winterfell. Theon, once I taught you sums and letters, history and warcraft. And might have taught you more, had you wished to learn. I will not claim to bear you any great love, no, but I cannot hate you either. Even if I did, so long as you hold Winterfell I am bound by oath to give you counsel. So now I counsel you to yield.[28]
—Luwin and Theon Greyjoy

—Luwin to Osha and Bran Stark

Maester Luwin, I trust you as I would my own blood. Give my wife your voice in all things great and small. Teach my son the things he needs to know. Winter is coming.[3]

The maester is timid as an old woman.[19]

Maester Luwin is a wise counsellor, but unskilled in the arts of war.[20]

Maester Luwin would have helped anyone who came to him, she was certain.[31]