Meereen
The Slaver's Bay and the location of Meereen 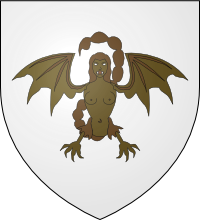 Meereen is the northernmost and the largest of the three great Slaver Cities of Slaver's Bay. It is ruled by the Great Masters, the heads of Meereen's slaving families, and its wealthiest of citizens live in stepped pyramids.[1]

Meereen lies on the northeast coast of Slaver's Bay at the mouth of the Skahazadhan, where it flows from its origins in Lhazar through the range of sandstone mountains separating Meereen and the rest of Slaver's Bay from the Red Waste. [2] The Dothraki Sea lies to the north, beyond the river. To reach Lhazar from Meereen one must pass through the Khyzai Pass.[1]

Copper is plentiful in the Ghiscari hills, but the metal is not as valuable as it had been when bronze ruled the world. Cedars once grown tall along the coast but they grow no more, they were felled by the axes of the Old Empire or consumed by dragonfire when Ghis made war against Valyria. Once the trees had gone, the soil baked beneath the hot sun and blew away in thick red clouds. According to Galazza Galare it was these calamities that transformed her people into slavers. Without slaves Meereen has little to offer.[3]

When attempting to convince Dany to marry him Hizdahr zo Loraq tells her of Meereen’s past and future possibilities - although he what he says is worded in such a way so that it appeals to Daenerys, there is likely much truth in what he declares,

Before you came Meereen was dying. Our rulers were old men with withered cocks and crones whose puckered cunts were dry as dust. They sat atop their pyramids sipping apricot wine and talking of the glories of the Old Empire whilst the centuries slipped by and the very bricks of the city crumbled all around them. Custom and caution had an iron grip upon us till you awakened us with fire and blood. A new time has come, and new things are possible. [4]

Meereen is as large as Astapor and Yunkai combined, like them it made of bricks, which are of many colors here.[5] It has wide brick streets and the fighting pits are red.[6] The city is dominated by a monstrous pyramid, called the Great Pyramid.

Meereen's walls are high, studded with bastions and anchored by great towers at every every corner there are defensive towers. The north wall of the city runs along the river bank of the Skahazadhan, the river that flows through the city. It's west wall runs along the shore of Slaver's Bay. Its gates has bronze harpy heads above its gates, with open mouths, from which the Meereenese can squirt boiling oil from those mouths to deter attackers. Meereen draws its water from deep wells instead of the Skahazadhan river into which the sewers of the city empty out.[5]. 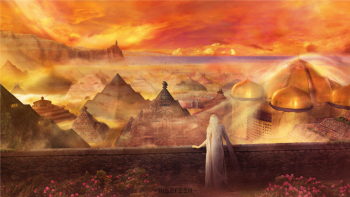 The city is ruled by slaving families who keep there residences within the pyramids of Meereen. The greater and more powerful the family the larger the Houses pyramid.

Meereen renown for trading in slaves. Slaves are used in every aspect of life as guards, cleaning, fighting in pits and pleasure. Healthy young girls and boys under ten are especially sought after as slaves to be used in brothels.[7]

Slavers in Meereen only cut off the testicles when making eunuchs, compared to Astapor, where they cut off both penis and testicles.[8] When Daenerys Targaryen took Meereen, she abolished slavery within the city. However the practice was continued in the hills where slaves still worked on the estates of the wealthy.[1] 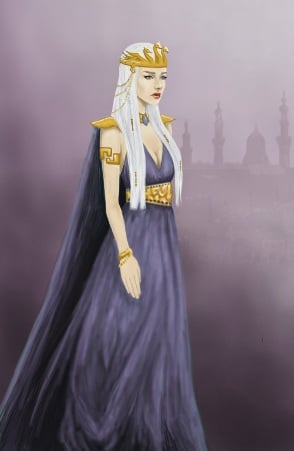 Ser Jorah Mormont advises Khal Drogo to drive his slaves to Meereen since it has suffered from a plague recently.[7]

The Great Masters scorch the earth around Meereen when they hear Daenerys Targaryen's army is marching on the city. The city is soon besieged by the forces of Daenerys.[5] She takes the city by sending men through the sewers and battering down the eastern gate. After receiving news from Astapor, which has not faired well since its earlier capture, Daenerys decide to remain and learn to rule in Meereen instead of spreading her rule elsewhere.[6]

Merchant ships from Westeros and the Free Cities are now few and far between, since the slave commerce and fighting pits are closed under Daenerys' rule.[9]

While several of the Wise Masters have accepted the rule of Daenerys, an organization known as the Sons of the Harpy are waging a shadow war against her and slaying small groups of Freedmen, Shavepates and Unsullied in the dead of night.

The armies of Yunkai surround the city. The ruling council of Meereen assumes command of the overseeing of Meereenese affairs when Daenerys flees from Daznak's Pit on Drogon's back. Headed by the Queen's Hand, Ser Barristan Selmy, they meet to discuss how to best deal with the Yunkish army.

A child departed Qarth, as lost as she was lovely. I feared she was sailing to her doom, yet now I find her here enthroned, mistress of an ancient city, surrounded by a mighty host that she raised up out of dreams.[3]

Xaro Xhoan Daxos, to Queen Daenerys Targaryen during his visit to Meereen

Chapters that take place at Meereen