Difference between revisions of "Mya Stone" 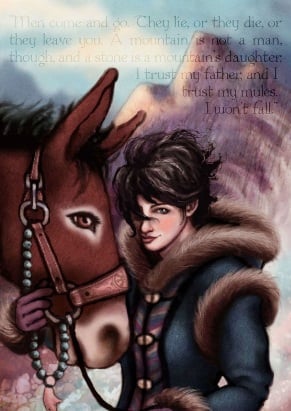 Mya serves as a guide on the rocky climb from the Vale to the Eyrie, leading trains of mules - Heliotropa ©

Mya Stone is a young woman serving House Royce of the Gates of the Moon.

She is a tall, strapping young woman, with coal-black hair cut short and deep blue eyes.[2] Her eyes are said to be her best feature. She is said to have a mirthful, lusty personality. She tends to dress in a masculine manner, eschewing dresses for leather. "Alayne Stone" thinks her pretty if only she would dress like a girl.[3]

Lyanna Stark hears of Mya Stone's birth and parentage, and thus becomes less enthused of her betrothal to Robert Baratheon. [4]

Mya serves as a guide on the treacherous rocky climb from the Vale to the Eyrie, leading trains of mules. She is somewhat openly known to be the bastard daughter of the king from the time he was fostered as young man by Lord Jon Arryn, although she was not acknowledged by her father. She has vague memories of her father, as a big strong man tossing her in the air and catching her. She is nineteen years old, King Robert's eldest child.[1]

At some point after the birth of Joffrey Baratheon, Robert expressed interest in taking one of his base-born daughters (apparently Mya) to court. Cersei Lannister did not protest, but spitefully stated that "the city is not a healthy place for a growing girl", inferring that Cersei would harm her. Robert grew enraged enough to strike her, but did not press the point.[5]

Mya Stone reported that she was in love with Mychel Redfort, and hoped to marry him, hopes that were thwarted when Mychel married a highborn Vale maid. Mya's marriage to Mychel would have been rather unlikely, as she was baseborn, and he the son of house of Andal nobility in any event.[2] After Catelyn Tully's arrival at the Gates of the Moon, Catelyn is ordered to ascend to the Eyrie by Lady Lysa Arryn. Mya offers to take her up using the mules.[2]

She later caught the eye of the amorously intended Lothor Brune.[3] She also becomes a favorite companion of "Alayne Stone" when she takes residence in the Eyrie along with Petyr Baelish.