Prince Oberyn Nymeros Martell, also known as the Red Viper, is a member of House Martell and is the younger brother of Doran Martell, Prince of Dorne. Oberyn has eight bastard daughters called the Sand Snakes, the four youngest of whom are by his current paramour, Ellaria Sand. In the television adaptation Game of Thrones Oberyn is portrayed by Pedro Pascal. 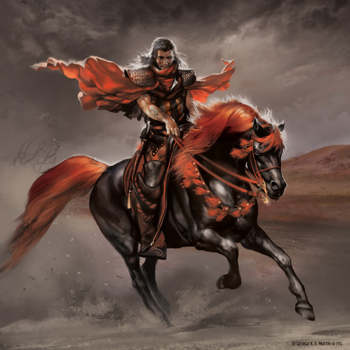 Oberyn and his sand steed - by Smirtouille © FFG

Oberyn has the features of a salty Dornishman. He is a tall, slender, graceful, and fit man,[8][9] and has a lined and saturnine face with thin eyebrows, black "viper" eyes and a sharp nose.[8][9] His hair is lustrous and black, with only a few silver streaks, and recedes from his brow in a widow's peak.[8] Oberyn is a renowned warrior,[8] quick as a water snake[10] and very athletic.[11]

Oberyn has always been fierce.[10] He has a fearsome and notorious reputation.[8][12] According to Lord Tywin Lannister, Oberyn has always been half-mad.[2] Oberyn's brother Doran has described him as "deadly, dangerous, [and] unpredictable", stating that "no man dared tread on him".[13] However, Doran also claims Oberyn is rash.[10] A witty man who is sharp of tongue,[8][9] Oberyn has claimed to have been "a monstrous young fellow" in his youth.[11] Oberyn is a bloodthirsty man, who for years has sought revenge for his sister Elia, with whom he had been inseparable as children.[8] He despises Lord Mace Tyrell, calling him the "Fat Flower of Highgarden".[8][9]

Rumor has it that Oberyn is bisexual.[8] His one-time squire,[14] Ser Daemon Sand, is rumored to have been one of his lovers.[15] Additionally, it is said Oberyn has "begotten bastard girls all over Dorne", though in reality only four of his eight daughters are Dornish, born to his long-time paramour, Ellaria Sand.[16] He fearlessly claimed and raised them,[17] arming them so they would be able to defend themselves[18] and allowing them the freedom to choose between wedding, or taking pleasure wherever it can be found.[18]

Oberyn has an interest in fine horseflesh.[8] His sand steed is a stallion "black as sin", with a mane and tail the color of fire.[8] Oberyn has been known to wear a cloak of pale red silk, an armored shirt of overlapping rows of glittering copper disks, and a high gilded helm with a copper sun on its brow.[8] His round steel shield is brightly polished, and displays the Martell sun-and-spear in red gold, yellow gold, white gold, and copper.[8][11]

In his youth, Oberyn was fostered at Sandstone.[19] When in his teens, Oberyn traveled with his mother, the ruling Princess of Dorne, and his sister, Princess Elia Martell, and met multiple potential marriage candidates for his sister, visiting castles at Starfall, the Arbor, Oldtown, the Shield Islands, and Crakehall. Oberyn spent his time mocking Elia's suitors. The last castle they visited was Casterly Rock, where they arrived shortly after the death of Lady Joanna Lannister in childbirth. According to Oberyn, his mother and Joanna had planned to wed either Oberyn to Cersei Lannister, or Elia to Jaime Lannister, or both. Lord Tywin Lannister, however, was unreceptive of the suggestion, stating that his daughter would marry Prince Rhaegar Targaryen. He offered the newborn Tyrion Lannister as a husband for Elia instead, which was seen as an insult.[11]

At the age of sixteen, Oberyn was found in bed with the paramour of Lord Edgar Yronwood, so the lord challenged him to a duel. The duel was to first blood, given the prince's youth and high birth, and both took cuts. Edgar's wounds festered and killed him. Oberyn has been known as the "Red Viper" ever since by friends and foes alike, due to rumors that he fought the duel with a poisoned blade.[8] Afterward, Oberyn was sent to Oldtown and then to Lys in temporary exile (though none called it such) in order for House Martell to make peace with House Yronwood, and Prince Quentyn Martell was sent as a ward to Yronwood.[15]

Oberyn traveled extensively in the Free Cities, where he learned much about poisons and perhaps even darker arts.[8] He had studied at the Citadel, going so far as to forge six links of a maester's chain before he grew bored.[8] He soldiered in the Disputed Lands across the narrow sea, riding with the Second Sons for a time before forming his own company. It is said that he beds both men and women, and has begotten eight bastard daughters, called the Sand Snakes.[8] Oberyn, however, does not let his children grow up wanting: he takes responsibility for them, and actively seeks to help raise all his children (something few lords do when it comes to their bastard offspring). He teaches them how to defend themselves and allows them great independence in growing up.[18]

Prince Oberyn was unhorsed by Prince Rhaegar Targaryen and Ser Barristan Selmy at a tourney at Storm's End.[20][21] He was also present during the tourney at Harrenhal in 281 AC, where he danced with Lady Ashara Dayne.[5]

Oberyn had a close relationship with his sister Elia. It is currently unknown where Oberyn was during Robert's Rebellion.[22]

During the Sack of King's Landing, Ser Gregor Clegane raped and murdered Elia and also killed her son, Prince Aegon Targaryen. Another Lannister knight, Ser Amory Lorch killed her daughter, Princess Rhaenys Targaryen. After hearing of these deaths, Oberyn attempted to raise Dorne for the exiled Prince Viserys Targaryen. The new Hand of the King, Lord Jon Arryn, traveled to Sunspear in the year following the war, and was able to keep the peace, but Oberyn has desired revenge ever since.[8] After the war, Oberyn seldom left Dorne.[2]

Oberyn is primarily responsible for giving modern revitalization to the ongoing feud between his House and the Tyrells, because he accidentally crippled Willas Tyrell in a tourney. Oberyn struck Willas's breastplate clean, but the boy's foot caught in a stirrup as he fell and his horse fell on top of him. Oberyn sent his own maester to help treat Willas, who holds no grudge against Oberyn. The two correspond via raven message as both share a passion for horses.[8]

Oberyn and his brother Doran, Prince of Dorne, worked in secret for years planning on bringing an end to the reign of King Robert I Baratheon and destroying House Lannister.[18] Oberyn traveled to Braavos, where Viserys and Daenerys Targaryen were living with Ser Willem Darry. Oberyn and Willem signed a secret marriage pact, with the Sealord of Braavos as witness, promising Viserys the hand of Princess Arianne Martell in marriage, in return for Dorne's help in reclaiming the Iron Throne from House Baratheon.[23]

Oberyn eventually granted knighthood on his squire, Ser Daemon Sand.[15] Prince Quentyn Martell choose to be knighted by Lord Anders Yronwood instead of Oberyn.[3] When Prince Doran Martell moved to the Water Gardens for health reasons, he trusted Oberyn to look after Sunspear for him. Oberyn reported to his brother twice a fortnight.[3]

Prince Oberyn comes to King's Landing to claim his brother Doran's small council seat, and to finally receive justice for the death of his sister Elia,[8] as had been promised to the Martells by acting Hand of the King Tyrion Lannister.[24] Whenever he happens to see Tyrion, he asks when "justice would be served".[2] However, Lord Tywin Lannister plans lie to Oberyn and claim that the now-deceased Ser Amory Lorch was responsible for the deaths of Elia, her daughter Rhaenys, and her son Aegon, although Amory had only killed Rhaenys during the Sack of King's Landing.[2]

Oberyn is among those Lord Tywin Lannister considers as a possible candidate in marriage for his daughter, the widowed Queen Cersei.[25][26] Oberyn gives King Joffrey I Baratheon a red gold scorpion brooch for the royal wedding.[27]

After Tyrion is accused of Joffrey's murder, Oberyn is one of his judges. The day before a judgment is to be pronounced, Oberyn offers to be Tyrion's champion in a trial by combat against Ser Gregor Clegane, if Tyrion tells who is guilty of the murder of Elia. Tyrion denies any involvement of his father, Tywin, but tells Oberyn that Amory killed Rhaenys and Ser Gregor Clegane killed Elia and Aegon.[9] When Tyrion realizes the witness testimonies at the trial are sure to lead to a guilty verdict, he demands a trial by battle. To the consternation of the court, Oberyn announces that he will be Tyrion's champion. Tywin is angered, but grants Tyrion's request.[11]

The next morning, Tyrion is given leave to visit his champion. Oberyn plans to fight with a spear and use only light armor. He specifically warns Tyrion not to touch the weapon. He is confident, but Tyrion is not sure of his choice of weapon. Oberyn invites Tyrion to go to Dorne after the trial and talks about crowning Myrcella Baratheon. He then changes the subject to the time he visited Lannisport with his mother and sister Elia. His mother and Tyrion's mother Joanna Lannister were friends, and were planning on marrying Jaime to Elia and/or Cersei to Oberyn. However, when they arrived at Casterly Rock, Joanna had died, and Tywin refused both suggestions and said that Cersei was intended for Prince Rhaegar Targaryen. Because Elia later married Rhaegar, Oberyn thinks that this is why Tywin had Elia killed. Oberyn proclaims that today he will have justice for Elia and her children.[11]

In the trial by battle, Oberyn wounds Gregor several times by finding chinks in his armor, and severs Gregor's hamstring after the latter tires from chasing him. He breaks his spear in Gregor's belly, but rather than killing him, Oberyn insists that Gregor confess to Elia's murder. Changing the tide of the battle, Gregor trips Oberyn and smashes his armored fist into Oberyn's unprotected face, destroying his teeth and knocking out his eyes, then smashing in the prince's skull. Before killing Oberyn, however, Gregor announces his guilt in the death of Elia and Aegon for all to hear.[11]

Oberyn's daughters, the Sand Snakes, seek vengeance for his death; Prince Doran Martell orders Areo Hotah to place them under arrest to keep the peace.[10]

After Gregor Clegane's skull has been brought to Sunspear, Oberyn's family wonders how to be certain it was indeed Gregor's. Tyene Sand claims to know which poison Oberyn had used during his duel with Gregor and states that if his spear so much as broke Gregor's skin, Gregor could not have survived.[13] 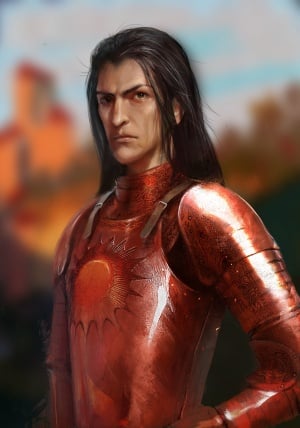 Ellaria: You're going to fight that?
Oberyn: I'm going to kill that.[11]

If you die before you say her name, I will hunt you through all seven hells.[11]

Oberyn has always been half-mad.[2]

The man's infamous, and not just for poisoning his sword. He has more bastards than Robert, and beds with boys as well.[26]

He knew the man only by reputation ... but the reputation was fearsome.[8]

Oberyn was ever the viper. Deadly, dangerous, unpredictable. No man dared tread on him.[13]

—Doran Martell to the Sand Snakes

The Visconti of Milan, whose arms depicted a blue viper, were an inspiration for Oberyn, the Red Viper.[29]