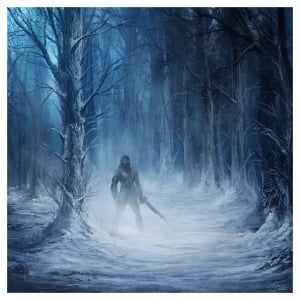 Other or White Walker. Art by Rene Aigner© 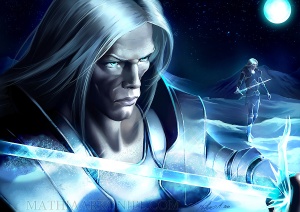 "Demons made of snow and ice and cold...The ancient enemy. The only enemy that matters." [1]

-Stannis Baratheon describing the Others.

The Others, known as the "White Walkers" among the wildlings, exist north of the Wall. Before the events in the Novel, the Others had supposedly not been seen for many thousand years. So far the Others have appeared in the flesh only twice in the whole saga and their purpose remains unknown at this time.

According to legend, the Others first appeared approximately 8,000 years before War of Conquest, during a winter that lasted a generation and a period of darkness known as the Long Night. Eventually they were defeated, supposedly by the Night's Watch and The Wall may have been raised as a defense against them.

In apparent contradiction the Night's King appears to have married a White Walker, but after he was defeated the Others are supposedly not heard of again and became regarded south of the Wall as nothing more than fairy tales to frighten the little children.

Oddly enough however, Lord Commander Jeor Mormont, in conversation with Tyrion Lannister, refers to White Walkers being glimpsed by fisherfolk on the shore near Eastwatch, with little concern. He does not say whether they were glimpsed on the shore north of the Wall or on the shore to the south of the Wall. Tyrion is unable to hold his tongue at the mention of White Walkers replies that fisherfolk of Lannisport often glimpse merlings.[2] The conversation then moves to the movements of the wildlings which is (at the time) a more pressing concern.

The Others' first appearance in the saga is in the Prologue of the first book, killing two rangers of the Night's Watch. Craster gives up his infant sons to the Others, and his wives declare that they become White Walkers themselves, although this has yet to be established. 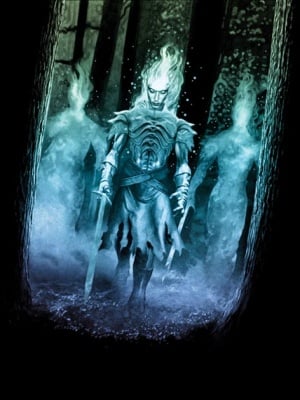 The Others appear in the prologue to AGoT as tall and gaunt with flesh pale as milk and blue eyes, deeper and bluer than human eyes, burning like ice. The White Walker who married the Night's King is similarly described as having skin as pale as the moon and eyes like blue stars. Old Nan declares them to be cold dead things, hating all life, but in an email to the comic-book artist Tommy Patterson GRRM recently wrote:

'The Others are not dead. They are strange, beautiful… think, oh… the Sidhe made of ice, something like that… a different sort of life… inhuman, elegant, dangerous.'

They wear reflective armor that shifts in color with every step rather like the stealth armor once said to have been worn by the Children of the Forest. They go lightly on the snow and leave no prints to mark their passage. They appear to be superior swordsmen, wielding thin crystal swords said to be so cold as to shatter any object they touch, including the steel blades favoured by the Night's Watch.[3]

Their language is unknown, although it may be the Old Tongue. When one spoke in the prologue his voice was said to sound like the cracking of ice, but this may simply have been a figure of speech. The wildlings believe the Others and their Wights can smell life, or rather its warmth.

The old stories reveal uncertainty whether the Others come when it is cold or that it becomes cold when they appear, during snowstorms or mist and melt away when the skies clear. They hide from the light of the sun and emerge at night; although once again some stories claim that their coming brings the night.

There are tales of their riding the corpses of dead animals such as bears, direwolves, mammoths, and horses, The Other that Samwell Tarly slays is riding Mawney’s dead horse. Hoarfrost covers it like a sheen of frozen sweat, and a nest of stiff black entrails drag from its open belly. On its back is a rider as pale as ice. The Others can be accompanied by "giant ice spiders" as big as hounds. [4]

Melisandre thinks that Others are servants of the Great Other, allegedly an evil god of darkness, cold, and death who wages eternal war against R'hllor. 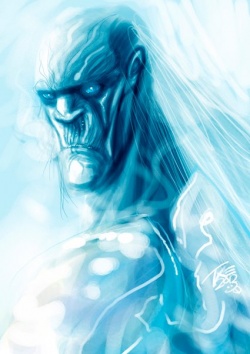 As the wildlings are passing through the Wall to settle on the Gift, Lord Commander of the Night's Watch Jon Snow asks Tormund Giantsbane to tell him of their foe, the Others. He tells him he wants to know all there is to know of the Others.

Tormund is plainly uncomfortable with the mention of the Others; he tells Jon that he does not want to discuss them, not here, not on the northern side of the Wall. He then glances uneasily towards the trees in their snowy white mantles. He says to Jon:

They’re never far, you know. They won’t come out by day, not when the sun’s shining but don’t think that means they went away. Might be you don’t see them, but they’re always clinging to your heels.

Jon asks if the Others troubled the wildlings on their way to the Wall. Tormund informs him that they never came in force, if that’s what Jon is meaning, but they were with them all the same, nibbling at their edges. They lost more outriders than he cares to think about, and it was worth your life to fall behind or wander off. Every nightfall they would ring their camps with fire. Tormund says they don’t like fire much:

When the snows came though…snow and sleet and freezing rain, its bloody hard to find dry wood or get your kindling lit, and the cold…some nights our fires just seemed to shrivel up and die. Nights like that, you always find some dead come the morning. ‘Less they find you first.

He says to Jon:

A man can fight the dead, but when their masters come, when the white mists rise up … how do you fights a mist crow? Shadows with teeth … air so cold it hurts to breath, like a knife inside your chest … you do not know, you cannot know … can your sword cut cold?

The Others have a few known weaknesses that are recorded in ancient texts. One is obsidian, otherwise called dragonglass or "frozen fire". When Samwell Tarly accidentally stabbed an Other with an obsidian dagger, its flesh and bones melted away leaving only an icy puddle. Ancient texts also record a weakness to "dragonsteel", which several have taken to be Valyrian steel. Mance Rayder expressed belief that magic wards in the Wall prevent the Others from crossing into the Seven Kingdoms.

After listening to Tormund’s words Jon Snow remembers all the things that Sam had told him, the things he’d found in his old books. He thinks to himself that Longclaw had been forged in the fires of old Valyria, forged in dragonflame and set with spells. Dragonsteel, Sam had called it. Stronger than any common steel, lighter, harder, sharper … But he thinks that words in a book were one thing. He knows that the true test comes in battle.

Wights are dead men or creatures raised up by the Others, seemingly when touched by the cold that accompanies them. [5] They are thralls to the Others. Men who fall in battle against the Others must be burned, or else the dead will rise again as their thralls.

Other as depicted in the TV series

The Others, as they are often known in the novels and were still known by this name in the first draft of the pilot script of the TV series. were later renamed to 'White Walkers' instead. Whilst the producers have not commented directly on the reasons for the name change, fans speculate that this was done to avoid similarities to an identically-named faction in the television series Lost.[6] Additionally in the series the Others/White Walkers have a very different appearance to that described in the books, appearing instead as shadowed humanoids with brutal facial features.

This page uses content from the English Wikipedia. The original content was at Night's Watch. The list of authors can be seen in the page history of Night's Watch. As with A Wiki of Ice and Fire, the content of Wikipedia is available under the Creative Commons Attribution-ShareAlike License.