Difference between revisions of "Prince of Pentos" 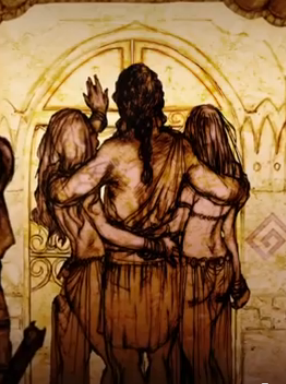 The Prince of Pentos is chosen from the forty families; he has a mostly ceremonial function and presides chiefly over balls and feasts.

The prince rides about the city in a palanquin of ivory and gold. Three heralds go before him with:

On the first day of every New Year, the Prince must deflower the maid of the fields and the maid of the seas. However when the Pentoshi believe the gods are angry at them - such as after loss in a war or a crop failure - they sacrifice the prince by cutting his throat to appease the gods and then choose a new prince from amongst the forty families. [1]

It appears that the chosen prince has no say in whether he wants to be Prince of Pentos or not.

Years ago a prince fled Pentos when he was selected. When the Windblown’s Tattered Prince was twenty-three, the magisters of Pentos chose him to be their new prince almost right after they have beheaded the previous one. Instead of accepting their offer he fled to the Disputed Lands and never returned to Pentos.

Illyrio Mopatis grew so respectable that a cousin of the Prince of Pentos let him wed his maiden daughter. After Illyrio married his second wife, the palace gates were closed to him thereafter, but he did not care, the price was small enough, for Serra.

Past Princes of Pentos

The identity of the current prince is not known.