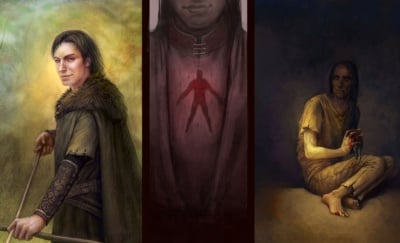 Prince Bran Stark, the heir of his elder brother Robb, is the Stark in Winterfell while Robb, the King in the North, campaigns in the south.[9][10]

During his capture of Winterfell, Theon Greyjoy takes prisoner Bran and Rickon Stark and sits the throne within the castle's Great Hall.[11] His sister Asha later mocks him for his inability to properly hold Winterfell, calling him Prince of Fools.[1]

Prior to the battle at Winterfell, the outnumbered Theon tells Ser Rodrik Cassel's northern army that all who swear fealty to Balon Greyjoy as their king and to Theon as Prince of Winterfell will be confirmed in their rights. However, Theon is captured by Ramsay Snow during the sack of Winterfell.[2]

After noticing other people at Queenscrown, Bran tells himself not to be afraid, as he was the Prince of Winterfell.[4]

Theon travels to the siege of Moat Cailin under a peace banner to present the now-legitimized Ramsay Bolton's terms of rendition to the ironborn garrison guarding its three towers. Before he leaves Ramsay tells him,

You will pretend to be a prince, but we know the truth. You’re Reek. You’ll always be Reek, no matter how sweet you smell... You will be tempted to betray me. To run or fight or join our foes. No, quiet, I’ll not hear you deny it. A man would turn against me in your place, but we know what you are, don’t we? Betray me if you want, it makes no matter ... but count your fingers first and know the cost...[12]

Later at Winterfell, Theon is chosen to ceremoniously present "Arya Stark", actually Jeyne Poole, in marriage to Ramsay, since he was the longtime ward of Lord Eddard Stark and it is widely believed that Arya's trueborn brothers are dead. When Theon gives away the feigned Arya to Ramsay he is made to play the part of the Prince of Winterfell once again.[7]


Cley: Why not? Everyone else is a king or prince these days.[10]

I will be as good a lord to you as Eddard Stark ever was. Betray me, though, and you'll wish you hadn't.[11]

- Theon to the people of Winterfell

I am the Prince of Winterfell! This is my seat, no man will drive me from it. No, nor woman either![13]

- Theon to his sister Asha Greyjoy

'I made myself the Prince of Winterfell', he thought, 'and from that came all of this.' He had thought that men would sing of him for a hundred years and tell tales of his daring. But if anyone spoke of him now it was as Theon Turncloak, and tale were told of his treachery.[7]

'There will be no flaying here whilst I am Prince of Winterfell', Theon had responded, little dreaming how short his rule would prove.[7]