Pyat Pree, a warlock is one of the three representatives of Qarth that accompany Jhogo back to Vaes Tolorro after he was sent by Daenerys Targaryen to discover what lies near the abandoned city.[2] He escorts Daenerys to Qarth where he tries to convince her to come with him and visit the House of the Undying.[3] He counsels on the rules of entering the House of the Undying in Qarth. 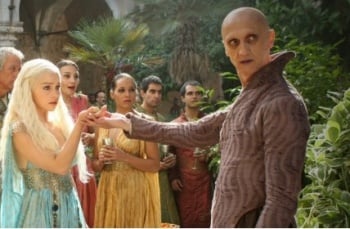 While visiting Meereen Xaro Xhoan Daxos informs Daenerys Targaryen that not all her enemies are in Yunkai. He warns her to "beware men with cold hearts and blue lips".

He tells her that she had not been gone a fortnight when Pyat Pree set out from Qarth with 3 of his fellow warlocks, to seek her in Pentos, to seek revenge on her for the burning of Warlocks' House of the Undying. This implies to readers that the warlocks are most likely the ones captured by Euron Greyjoy - who come across 4 warlocks when he captured a certain galleas out of Qarth.

In private Ser Barristan voices his concern to Dany about Pyat Pree. When Dany tries to recall Pree's face all she can see are his lips - which the shade of the evening turned blue.

She tells Ser Barristan that if a warlock's spell could kill her, she would be dead by now. She states that she left their palace in ashes. However she thinks privately to herself that it was Drogon who saved her when the Undying Ones would have drained the life from her. Drogon burned them all. Ser Barristan does not dispute her and replies that he will be watchful.