Difference between revisions of "Pycelle"

Grand Maester Pycelle has served the realm for many years. He is the highest-ranking maester and answers only to the King. In the TV series, he is played by Julian Glover.

He has only sparse hair that runs around his bald, spotted head.[1][2] His maester's chain is two dozen heavy chains wound together that stretches from neck to breast.[3] He has a long, snowy beard that runs down to his chest.[4]

Pycelle forged his maester's chain during the reign of Maekar I.[5] He has been the Grand Maester of the Seven Kingdoms for forty years, serving the kings Aegon V, Jaehaerys II, Aerys II, Robert I, Joffrey I and lastly Tommen I. Despite his oath to serve the realm however Pycelle has more loyalty to House Lannister.[5] He convinced King Aerys II to open his gates to Lord Tywin in the waning days of Robert's Rebellion in the hope that Tywin would take the throne, allowed Lord Arryn to die under his care to keep the secret of Queen Cersei's incest and generally promoted the interests of House Lannister on the small council for years. 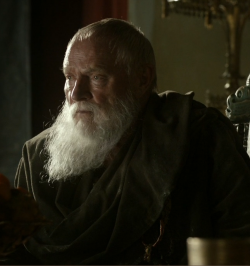 Catelyn Tully reports to Eddard Stark that Pycelle was helpless in saving the life of Lord Jon Arryn.[6] Grand Maester Pycelle sits on the small council. When Eddard makes enquires about the death of Jon Arryn, Pycelle points the finger of suspicion on Varys.

After Eddard Stark is injured in a street fight with Ser Jaime Lannister, Pycelle tasks himself with maintaining Eddard's healing.[7] When it was discovered Gregor Clegane had led raids into the riverlands burning several villages, Pycelle tries to delay any action taken against House Lannister. Eddard becomes more and more convinced that Pycelle is the Queen's creature.

Pycelle under Cersei Lannister's direction visits the grief stricken Sansa Stark after her father's death and examines her intrusively before giving her a potion to calm her.

Tyrion isn't sure who he can trust, so he tells three secrets, one to Varys and one to Littlefinger. To Pycelle, he goes to send letters to Prince Doran Martell.[8] Pycelle does send the letters, but reads them first. He shares the information with Cersei Lannister, who proceeds to use it against Tyrion, inadvertently letting Tyrion realise he can trust Varys and Littlefinger. In the time it took Pycelle to read the letter, Tyrion has time to help himself to a mild poison from the maesters cabinet, which he uses later on Cersei. Pycelle is present when Tyrion gives his terms for peace with the North.

At midnight, Tyrion takes Shagga and Timett and confronts Pycelle in his chambers, where he is found naked in bed with a female servant girl. With the help from Shagga, Tyrion intimidates Pycelle, who wets the bed in fear of the wildlings. Whilst Shagga shaves off Pycelle's signature white beard using a very sharp axe blade, Tyrion learns that Pycelle has betrayed the realm over and over in service to House Lannister. He allowed Jon Arryn to die when he could have easily saved him, convinced Aerys II to open the gates to Lannister forces during Robert's Rebellion and would have finished Robert I off himself if the wounds from the boar had not been so fatal.

Pycelle justifies Jon Arryn's death, since he was getting close to the truth about Cersei's incest and Joffrey's parentage--admitting that Maester Colemon was treating Arryn properly but the Queen needed him dead. He justifies Robert's death, since Renly had been plotting with the Tyrells to kill Cersei and wed Margery to Robert. Tyrion has him thrown in one of the black cells.[9]

Pycelle is restored to his position by Tywin Lannister after Tywin learns that the Citadel was planning on naming a member of House Tyrell as his replacement. Pycelle with his beard shaved off and weakened from his time in the Black cells appears to be a broken man. He falls asleep during the wedding of Joffrey Baratheon and Margaery Tyrell and is unable to take any action to prevent Joffrey's death at the banquet from poison, something that sours Queen Cersei's opinion of him. During the trial of Tyrion Lannister for Joffrey's murder, he is called as a witness for the prosecution to discuss poisons and how Tyrion might have killed the King.[10]

Following Joffrey's death the relationship between Pycelle and Queen Cersei as Regent becomes more strained. He opposes the naming of Qyburn, a disgraced maester, to the small council. Cersei blames him for the deplorable state of Lord Tywin Lannister's corpse.[11] Taena of Myr casts suspicion on Pycelle when she reports to Queen Cersei that he is found often in the company of Queen Margaery Tyrell.[12]. Pycelle objects to many of Cersei's edicts, such as her refusing to honor the debts the crown owes the Iron Bank of Braavos and her decision to allow the Faith of the Seven to re-institute the Faith Militant. After pressure from Cersei, Pycelle admits publicly to giving Margaery moon tea, a contraceptive.

This discovery is crucial in Cersei's efforts to frame Margaery for adultery and treason, delivering her to the captivity of the High Septon.[13]

Cersei considers getting him replaced and Pycelle's future at court looks uncertain. When Cersei is arrested by the Faith however, Pycelle successfully seizes control of the council. He removes Osfryd Kettleblack as commander of the Gold Cloaks (so Osfyrd will not be able to use the Watch to try and free Cersei and his brother Osney, both of whom were prisoners of the Faith) and raises the commander of the Dragongate to command the watch. At the end of 'A Feast of Crows Qyburn states to Cersei that the realm is effectively being ruled by Pycelle and Harys Swyft. Pycelle also dispatches a message to Ser Kevan Lannister offering him the regency.

Pycelle continues his duty as Grand Maester but is wary of Mace Tyrell who is wroth with Pycelle over revealing Maergary's requests for moon tea. Pycelle even requests guards from Ser Kevan out of fear for his personal safety. Hi fear proves justified, as Pycelle is killed in his chambers, though not by Tyrell men but by Lord Varys, who removes both him and Kevan Lannister to ensure they cannot intervene to repair the damage Cersei had done to the kingdom and the Lannister-Tyrell alliance.

See also the article on Pycella on the Game of Thrones wiki.