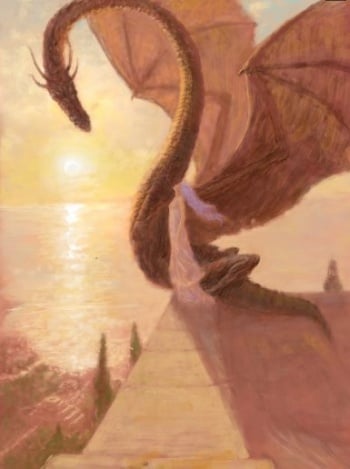 Daenerys's chambers are surrounded by greenery and fragrant pools. [1] There are low brick parapets. Irri occasionally shares the main bed with Daenerys. Jhiqui and Missandei appear to have their own beds within the chamber.[2]

Ser Barristan Selmy's bedchamber (originally slave quarters) is a small cell adjoining the queen’s apartments; his furnishings consist of a bed, a chamber pot, a wardrobe for his clothing and a chair to sit on. On his bedside table he keeps a beeswax candle and a small carving of the Warrior; though he is not a pious man the carving makes him feel less alone in the queer alien city that is Meereen.[3]

There is a terrace garden within the apex. From the terrace Daenerys has a view of the whole city of Meereen and its surrounding area, including the Temple of the Graces and nearby areas of the Skahazadhan river, the dry brown hills, the orchards, and the fields of the city.

The garden is directly connected to Daenerys's bedchamber through terrace doors, allowing her to step out anytime of the day or night. A persimmon tree seems to serve as a favorite spot for birds.[2] There is a terrace pool which serves as Daenerys's bath. She bathes regularly in its cool water, while little fish nibble at her arms and legs. The persimmon tree is visible from the pool. 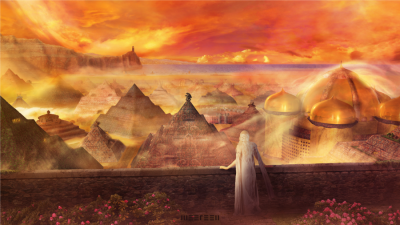 The view from the Queen's apartments - by lvlorf3us ©

Daenerys Targaryen's dragons know where she is living in Meereen. She finds Viserion on the terrace coiled around a pear tree with his head resting on his tail.[4] Rhaegal is captured on the terrace when he is basking in the sun.[5] Drogon liked to bask in the sun at the apex of the Great Pyramid when he was sated.[5]

While bathing, Daenerys has a vision of Quaithe standing below the persimmon tree. [5]

Daenerys takes Daario Naharis as her paramour and shares her bed when he is in the city.

After Daenerys's disappearance on Drogon, Irri and Jhiqui continue inhabiting the royal apartments until they leave Meereen with most of Daenerys's Dothraki khalasar. The khalasar has set out to search the Dothraki Sea for their missing queen.[6]

The cupbearers of Daenerys live in the queen's apartments until they are moved to the apartments of Hizdahr zo Loraq in the heart of the Great Pyramid.[6]

For a while Ser Barristan Selmy, now the Queen's Hand, and Missandei remain the only occupants of the apex, with Missandei in the private chambers and Barristan in his small cell. Barristan thinks of Missandei as a forlorn little ghost haunting the royal chambers.[6] She occupies herself with reading piles of scrolls and books.[7]

At Barristan's command the burned and dying Prince Quentyn Martell is laid out in the queen's own bed. Quentyn had been a knight and it seemed only kind to let him die in the bed he had crossed half the world to reach. The bedding was ruined—sheets, covers, pillows, mattress acquired the smell of blood and smoke—but Barristan thinks that Daenerys would forgive him.

Only Missandei can bear to remain by Quentyn's side; his burns are horrific and the sight of him is too disturbing for the cupbearers. She tends to such needs as Quentyn can express, giving him water and milk of the poppy when he was strong enough to drink, listening to the few tortured words he gasps out from time to time, reading to him when he falls quiet and sleeping in the chair beside him. Barristan calls for the Blue Graces four times, but the official healers of Meereen never come. Quentyn's dying lasts for three days. Missandei informs Barristan of Quentyn's death. Barristan removes the coverlet Missandei had placed for one last look at the Prince’s face, thinking that Quentyn should have stayed in Dorne, he should have stayed a frog.[8] When Quentyn’s corpse is removed, the queen’s cupbearers return to dwell in the royal apartments.[8]