From A Wiki of Ice and Fire
Revision as of 20:09, 18 March 2014 by Nittanian (talk | contribs) (History and Recent Events; the Dornish Marches are now controlled by the Stormlands)
(diff) ← Older revision | Latest revision (diff) | Newer revision → (diff)
Jump to: navigation, search

The Reach is one of the constituent regions of the Seven Kingdoms on the continent of Westeros. It was formerly a sovereign nation known as the Kingdom of the Reach before the War of Conquest.

The Reach is ruled from the castle of Highgarden by House Tyrell. It is the second-largest of the kingdoms behind the North and is considered the most fertile and heavily-populated part of Westeros. Bastards born in the Reach are given the surname Flowers.

The Reach is the most fertile part of Westeros and has numerous and well-populated villages and towns. The Sunset Sea is found to the west, while the hills of the Westerlands are to the northwest and the Blackwater Rush of the Riverlands is to the north. The Reach borders the Crownlands to the northeast, while to the east and southeast are the Stormlands and their Dornish Marches. South of the Reach are the Red Mountains of Dorne and the Summer Sea. The Roseroad links Oldtown with King's Landing by way of Highgarden, while the Ocean Road links Highgarden with Lannisport.[2] 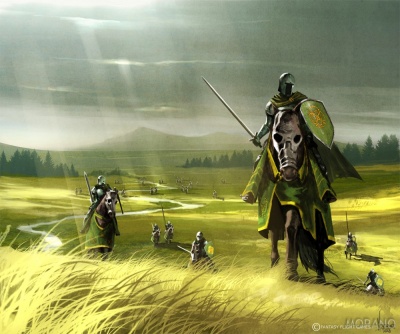 A large Tyrell ranging party rides across the Reach in a wide formation – by Tomasz Jedruszek. © Fantasy Flight Games
See also: Category:Places in the Reach

The beginnings of the Reach can be traced back to Garth Greenhand, the legendary King of the Reach who lived in the Age of Heroes. The royal line of House Gardener of Highgarden claimed descent from Garth, as do many current houses in the region.[3][4]

The Reach is the heart of the chivalric tradition in the Seven Kingdoms, the place where knighthood is most universally esteemed. Tourneys here have the most elaborate and varied rules, and are the most likely to be held for knights only. Dornishmen have warred against the Reach for thousands of years; rivalries include the feud between House Oakheart and House Dayne.[5] The Dornish Marches, the lands just north of the Red Mountains of Dorne, have long been disputed. The lords of Highgarden count Defender of the Marches amongst their titles,[6] although the marcher lords now allegiance to House Baratheon of the Stormlands.

During the War of Conquest, King Mern IX Gardener led the army of the Reach against the invading House Targaryen, but he was killed at the Field of Fire and his line was ended. House Tyrell, the stewards of the Gardeners, surrendered Highgarden Aegon. They were rewarded with both the castle and the position of overlords of the Reach.

In the Blackfyre Rebellion, several of Daemon Blackfyre's greatest supporters were men of the Reach, including Ser Quentyn Ball and Lord Gormon Peake, while others supported Daeron II Targaryen.

Robert's Rebellion saw the Reach provide much of the pro-Targaryen strength. Lord Randyll Tarly led the van of Lord Mace Tyrell to victory against Lord Robert Baratheon in the Battle of Ashford. After Ashford, Mace led the Siege of Storm's End.

After King Robert Baratheon's death, most lords of the Reach join the Tyrells in declaring for Renly Baratheon. Some join Stannis Baratheon after Renly's murder, but most are idle for a time before marching with Tywin Lannister to defeat Stannis in the Battle of the Blackwater.

The Reach itself remains untouched by the war until the Battle of the Shield Islands, which marks the beginning of King Euron Greyjoy's campaigns in the south. Since then Oldtown and the Arbor have been threatened by ironborn raiders.

The Reach is the second wealthiest region in the Seven Kingdoms behind the Westerlands, but it is the most fertile region. Among the products it produces are melons, fireplums, peaches, apples, and grapes. The Arbor is said to make the finest of wines, from dry fruity reds to a rich golden vintage. Woodharps made in Oldtown are highly sought after.

Before the Conquest, the golden coins of the Reach were known as hands. They still exist in some number, with each coin roughly half the value of a dragon. [7]

In Highgarden there are fields of golden roses that stretch away as far as the eye can see. The fruits are so ripe they explode in your mouth-melons, peaches, fireplums, you’ve never tasted such sweetness.[8]