The red waste[1][2][3] or Red Waste,[4][5] also called the red lands,[1] is a region of Essos west of the Bone Mountains. The desert is a barren and unforgiving landscape of stunted trees, devilgrass, and ancient ruins. 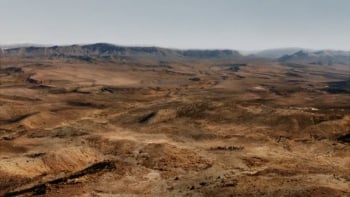 The red waste in Game of Thrones

The red waste is located south of the Dothraki sea and Lhazar, the land of the Lhazareen. It is east of Slaver's Bay and its hinterlands, north of the fabled city of Qarth, and west of the Bone Mountains.[6]

The land has low hills, barren windswept plains, and dry rivers.[1] Life is sparse in its red parched soil,[7] stone, sand, and red clay.[1] There is little forage, and water is found in shallow pools, bitter and stagnant. Wood is also hard to find, with the best being gnarled and tough.[7]

Within the red waste are four abandoned cities, Vaes Tolorro, Vaes Orvik, Vaes Shirosi, and Vaes Qosar, all formerly inhabited by the Qaathi but sacked by the Dothraki.[8] South of the red waste along the Summer Sea are, from west to east, the cities of Port Yhos, Qarkash, and Qarth.[6]

Beginning at Qarth, the Sand Road travels north through the eastern red waste along the Dry Bones. It then turns east through the Bones toward Bayasabhad.[9] Sandstorms have shaped the Dry Bones into strange shapes.[10]

The red waste was originally a more fertile region, but it turned into a barren desert just as the Qaathi established their city-states there, pushed south by the Tall Men.[5]

The Dothraki sacked much of the region during the Century of Blood.[5]

Following the red comet and avoiding rival Dothraki, Daenerys Targaryen leads her small khalasar across the red waste, losing many of the weaker members of her group. They eventually stumble upon an abandoned city, which they name Vaes Tolorro, and rest while Dany sends her bloodriders to scout and explore. Searching in the south, Rakharo finds the bones of a dragon. Eventually, from the southeast, Jhogo returns with three envoys from Qarth.[11]

While in Qarth, Daenerys sees dusty men out of the red waste at a bazaar.[12]

That way lies the red lands, Khaleesi. A grim place and terrible, the riders say.[1]

Death followed death. Weak children, wrinkled old women, the sick and the stupid and the heedless, the cruel land claimed them all.[1]

Dany looked at the horizon with despair. They had lost a third of their number, and still the waste stretched before them, bleak and red and endless.[1]

To reach Qarth, the horselords must needs drive their captives across the red waste. Hundreds would die, if not thousands … and many horses too, which is why no khal will risk it.[3]

Red Waste on the Game of Thrones wiki.