From A Wiki of Ice and Fire
Revision as of 16:45, 21 October 2022 by Abjiklam (talk | contribs)
(diff) ← Older revision | Latest revision (diff) | Newer revision → (diff)
Jump to: navigation, search
Not to be confused with Ramsay Snow and Theon Greyjoy, who have both gone by the name "Reek" at some point.

Reek is a man-at-arms in service to House Bolton.[1] His real name may be Heke.[2] Reek is the personal servant of Ramsay Snow. He is reportedly never far from his master, and is almost as renowned for his cruelty as Ramsay is, and appears to practice necrophilia.[3] Due to his stench, he is rumored to never bathe.[4]

According to Lord Roose Bolton, Reek always smelled appalling, apparently born with that condition.[5][N 1] To try to hide the smell, Reek bathed three times a day and wore flowers in his hair, but nothing helped. Reek once doused himself with perfume stolen from Roose's second wife, Bethany. When he was caught and whipped, even his blood smelled bad, according to Roose. Reek tried it again a year later, this time almost dying from drinking the perfume. Although Maester Uthor diagnosed the stench as the result of some sickness, Reek was otherwise healthy and strong. No one in the Dreadfort could stand to be near him, so he slept in a pig sty.[5]

When Ramsay's mother came to the Dreadfort and asked for a servant to help her raise her unruly and wild son, Roose gave her Reek as a jape. However, Ramsay and Reek became inseparable. According to Roose, Reek never had any training in arms, though he was Ramsay's tutor in martial prowess, which explains Ramsay's vicious and overly aggressive style of swordsmanship.[5]

Reek stayed with Ramsay, even after Ramsay was brought to the Dreadfort in 297 AC and was made Roose's unofficial heir. From that time on, Ramsay and Reek became infamous in the region for the "hunts" they undertook together. They caught peasant girls, then set them free and told them to run for their lives. The pair chased after the girls until they caught them, with Ramsay raping and killing the girls, then Reek having his way with the dead bodies while they were still warm. Only a few of the girls escaped.[4][3][5] 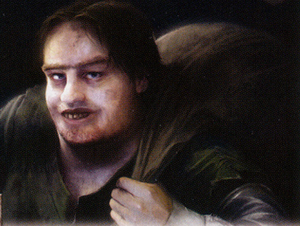 Lady Donella Hornwood arrives at Winterfell for the harvest feast. In a meeting with Ser Rodrik Cassel, Maester Luwin, and Bran Stark, she tells of Ramsay Snow massing men at the Dreadfort and mentions the stories of Ramsay and Reek.[4]

On her way back to Hornwood, Donella is abducted by Ramsay and forced to marry him. Calling himself Lord of the Hornwood, Ramsay locks Donella in a tower, where she starves to death. It is said that Reek participated in the crime.[4][6]

Ramsay and Reek are pursued by men sworn to Rodrik, and they are eventually caught during one of their "hunting" trips, which involved Ramsay raping and killing a girl. Reek's horse is lame, so both cannot escape. Ramsay, in an attempt to hide his true identity, pulls Reek off the dead body and gives him his own clothes and markings of identity, telling him to ride for help to the Dreadfort with the good horse. Rodrik's men kill Reek, believing him to be Ramsay. The dead girl had soiled herself before she died, so Ramsay smears the filth over himself and dons Reek's clothes. When Rodrik's men come back, they take Ramsay to be Reek and drag him back to Rodrik, who brings him as a prisoner to Winterfell.[6][3]

During the capture of Winterfell by Theon Greyjoy, his men find Ramsay, still posing as Reek, in the dungeons.[2] He continues to play the role of Reek, saying that his real name is Heke. Theon increasingly relies on the wretched creature, even going so far as accepting his suggestion to fake the deaths of Bran and Rickon Stark. Theon eventually sets him free, after "Reek" promises to bring him men from the Dreadfort in support.[7][8]

"Reek" brings the Dreadfort's garrison to Winterfell and betrays Rodrik's host in a battle at Winterfell. "Reek" uncovers his true identity as Ramsay to Theon and orders the sack of Winterfell.[3]

Ramsay imprisons Theon at the Dreadfort and insists upon calling him Reek. Theon's identity is lost to pain and torture; only "Reek" remains.[9]

The boy is a sly creature by all accounts, and he has a servant who is almost as cruel as he is. Reek, they call the man. It's said he never bathes. They hunt together, the Bastard and this Reek, and not for deer. I've heard tales, things I can scarce believe, even of a Bolton.[4]

The smell was something he was born with. A curse, the smallfolk said. The gods had made him stink so that men would know his soul was rotting.[5]

I do wonder, though ... was it Ramsay who corrupted Reek, or Reek Ramsay?[5]