Difference between revisions of "Renly Baratheon"

Renly Baratheon is the Lord of Storm's End and the younger brother of King Robert and Lord Stannis Baratheon, all sons of Steffon Baratheon and Cassana Estermont. He also serves as master of laws on Robert's small council.[2] In the television adaptation Game of Thrones Renly is played by Gethin Anthony.[3]

Renly is a handsome and charismatic man, winning friends easily, but also strikes some people as frivolous.[4] Renly enjoys tournaments and hunting but isn't driven by the passion for food, drink, or wenching, as Robert Baratheon came to be.

He is twenty-one years old, tall, handsome man with black hair falling to his shoulders.[5] He is thought to look eerily similar to a young Robert Baratheon, though several inches shorter, and far less muscular. Though in A Game of Thrones he is said to wear green to match his eyes, he is later described as having blue eyes. He wears a suit of enameled green armor with a helm that had a pair of golden antlers.[4] He keeps his body trim and his thick, jet-black hair long but always neatly combed. He prefers to be clean-shaven.[6]

Unbeknownst to the realm at large, and despite the many women who are attracted to him, Renly is homosexual. Although this is never explicitly stated, there are a number of oblique references that imply those who are close to him are aware of Renly's orientation and, more, that he and Loras Tyrell are involved. When Stannis and Renly are trading barbs in anticipation of battle, Stannis calls Renly's wedding to Margaery Tyrell a "mummer's farce" and in response to Renly's comment, "You'll be pleased to know she came to me a maid," Stannis replies, "In your bed she's like to die that way."[7] When Jaime stops Loras from confronting Brienne, he threatens Loras: "Now sheathe your bloody sword, or I'll take it from you and shove it up some place even Renly never found."[8] While contemplating Margaery's maidenhood, Cersei reflects on Margaery's marriage to Renly: "A man may prefer the taste of hippocras, yet if you set a tankard of ale before him, he will quaff it quick enough;"[9] the implication being that although Renly prefers the company of men, he may nonetheless have bedded Margarey because she was available. According to Loras, although Renly disdained too much book learning, he owned books with "drawings that would turn a septon blind", implying some kind of pornography.[10]

Born in 277 AC, Renly was the youngest of the three sons of Lady Cassana Estermont and Lord Steffon Baratheon of Storm's End.[2][11]

Renly grows up at Storm's End. Only a boy of six at the time of Robert's Rebellion, he spends the war under siege in Storm's End, together with his older brother, Stannis, where he was witness to the desperation of the starving garrison.[12]

As a boy, Renly loved bright colors and fabrics. He loved games as well, and would run laughing through the halls of Storm's End.[13]

By his older brother Robert, Renly was eventually granted the seat of Storm's End, upsetting Stannis, who felt that, as the elder of the two, Storm's End was his by rights.[13]

When Renly turned sixteen, he made a lord's progress across the Stormlands, for mark his coming of age. During this progress, he also visited Tarth, where Renly met Brienne of Tarth. He danced with her, and was courteous with her.[14]

Princess Arianne Martell recalls that Renly also visited Sunspear once. She had tried her best to seduce Renly, but remembers that he had seemed more bemused than inflamed by her attempts.[15]

During his time as Lord of Storm's End, Renly took Loras Tyrell as his squire.[16] Both Renly and Loras are gay,[17] and later on became lovers.[18]

Renly was eventually named to the small council, where he occupied the position of master of laws.[19] While he was at court, his castellan at Storm's End was Ser Cortnay Penrose, who raised King Robert's bastard son, Edric Storm, for them.[20] A woman named Brella ran Renly's household in King's Landing for him.[21] 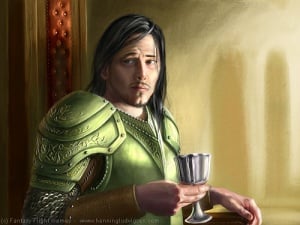 While Robert's procession is returning from Winterfell, Renly meets up with them, accompanied by Ser Barristan Selmy, Lord Commander of the Kingsguard, and the King's Justice, Ser Ilyn Payne.[5] Deeply amused by Prince Joffrey Baratheon's accusations against Arya Stark's direwolf Nymeria, Renly is forced to leave the room, laughing at the thought of Joffrey being disarmed and beaten by a girl smaller and younger than him.[22]

Renly performs well in the Hand's tourney, losing to the Hound, Sandor Clegane. Renly is quite popular with the smallfolk due to his good looks, friendly ways and charisma.[23] Renly shows Lord Eddard Stark a painted portrait of Margaery Tyrell and asks if she looks like Lyanna Stark; Eddard is puzzled by this but states the girl looks nothing like Lyanna.[24] Renly and Loras Tyrell want Robert to take Loras's sister, Margaery Tyrell, as his new queen and they think if Margaery looks like Lyanna it would make the plan easier.[25]

While Robert lies dying, Renly approaches Eddard and suggests they seize control of the royal children before Queen Cersei Lannister can strike. Eddard refuses the offer, and Renly flees the city along with Loras Tyrell. 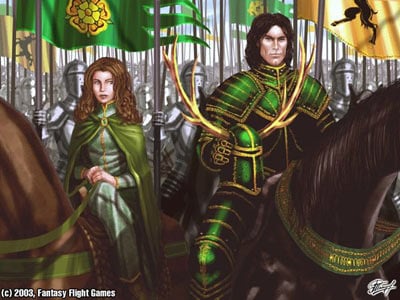 Renly with his wife Margaery - by Amok ©

After Robert's death, through his charisma and familiarity with his Stormlands bannermen, Renly manages to win support from many houses, despite his elder brother Stannis Baratheon having the better claim. Renly also wins the support of the powerful Tyrells and many of their bannermen through a secret love affair with Loras and a marriage to his sister Margaery.[26] Renly crowns himself King of the Seven Kingdoms at Highgarden, with his claim to the Iron Throne backed by the largest army in the War of the Five Kings.

Renly spends a great deal of time moving through the south, gaining support and men while waiting for the right moment to strike. He hosts tourneys for his men, including a great melee at Bitterbridge, and blocks the food supply to King's Landing, causing the capital to suffer starvation. All the while he waits for the Lannister and Starks to wear each other down. Brienne of Tarth, who is infatuated with Renly, joins the Rainbow Guard to be close to him.

Renly's plan goes awry, however, when Stannis besieges Storm's End, forcing Renly to respond.[4] The northern envoy, Catelyn Stark, convinces the men to parley, but Renly makes light of the situation, refusing to back down from his claim and advising his older brother to give up and eat a peach.[7] While preparing for battle with his brother's forces the next dawn, Renly is slain by an animated shadow conjured by his brother's sorceress adviser, Melisandre.[27] Loras's brother, Ser Garlan Tyrell, later wears Renly's armor in the Battle of the Blackwater to make it appear that Renly's ghost has returned for vengeance against the kinslaying Stannis.[28][29]

Loras tells Ser Jaime Lannister that he buried Renly in a place they knew from when he was a squire at Storm's End.[29]

Taena of Myr tells Cersei Lannister that she was in attendance for Renly's wedding to Margaery Tyrell at Highgarden, and she questions Margaery's claim that the marriage was never consummated.[31]

Renly: Give me an hour and I could put a hundred swords at your command.


Eddard: And what should I do with a hundred swords, my lord?


Renly: Strike! Now, while the castle sleeps. We must get Joffrey away from his mother and take him in hand. Protector of the Realm or no, he who holds the king holds the kingdom.[32]

Renly: Every moment you delay gives Cersei another moment to prepare. By the time Robert dies, it may be too late ... for both of us.


Eddard: Then we should pray that Robert does not die.
Renly: Small chance of that.
Eddard: Sometimes the gods are merciful.

Renly: I propose that you dismount, bend your knee, and swear me your allegiance.


Stannis: That you shall never have.
Renly: You served Robert, why not me?
Stannis: Robert was my elder brother. You are the younger.
Renly: Younger, bolder, and far more comely ...
Stannis: ... and a thief and a usurper besides.


Renly: The Targaryens called Robert usurper. He seemed to be able to bear the shame. So shall I.[7]

Stannis: Do you think a few bolts of cloth will make you king? Renly: Tyrell swords will make me king. Rowan and Tarly and Caron will make me king, with axe and mace and warhammer. Tarth arrows and Penrose lances, Fossoway, Cuy, Mullendore, Estermont, Selmy, Hightower, Oakheart, Crane, Caswell, Blackbar, Morrigen, Beesbury, Shermer, Dunn, Footly . . . even House Florent, your own wife’s brothers and uncles, they will make me king. All the chivalry of the south rides with me, and that is the least part of my power. My foot is coming behind, a hundred thousand swords and spears and pikes. And you will destroy me? With what, pray? That paltry rabble I see there huddled under the castle walls? I’ll call them five thousand and be generous, codfish lords and onion knights and sellswords. Half of them are like to come over to me before the battle starts. You have fewer than four hundred horse, my scouts tell me-freeriders in boiled leather who will not stand an instant against armored lances. I do not care how seasoned a warrior you think you are, Stannis, that host of yours won’t survive the first charge of my vanguard.[7]

Why the oldest son, and not the best-fitted? The crown will suit me, as it never suited Robert and would not suit Stannis.[7]

The bold little boy with wild black hair and laughing eyes was a man grown now, one-and-twenty, and still he played his games. "Look at me, I’m a king," Cressen thought sadly. Oh, Renly, Renly, dear sweet child, do you know what you are doing? And would you care if you did? is there anyone who cares for him but me?[13]

What has Renly ever done to earn a throne? He sits in council and jests with Littlefinger, and at tourneys he dons his splendid suit of armor and allows himself to be knocked off his horse by a better man. That is the sum of my brother Renly, who thinks he ought to be king.[13]

The youngest of Lord Steffon's three sons had grown into a man bold but heedless, who acted from impulse rather than calculation. In that, as in so much else, Renly was like his brother Robert, and utterly unlike Stannis. [13]

My brother is young and strong, and he has a vast host around him, and these rainbow knights of his.[13]

Robert was the true steel. Stannis is pure iron, black and hard and strong, yes, but brittle, the way iron gets. He’ll break before he bends. And Renly, that one, he’s copper, bright and shiny, pretty to look at but not worth all that much at the end of the day.[33]

When the sun has set, no candle can replace it.[35]

I will defend King Tommen with all my strength, I swear it. I will give my life for his if need be. But I will never betray Renly, by word or deed. He was the king that should have been. He was the best of them.[29]

I would have given my life for King Renly, and died happy.[36]

- Brienne of Tarth to Illifer and Creighton Longbough