Riverrun is the ancestral castle of House Tully, the Lords Paramount of the Trident. It is situated in the western riverlands, at the point where the Tumblestone and Red Fork rivers meet.[1] Riverrun is north of Pinkmaiden and northwest of Acorn Hall. The castle sits along the river road, an easy ride[2] which links Lannisport and the crossroads.[3]

The household of Riverrun includes Vyman, its maester, and Utherydes Wayn, its steward. Ser Desmond Grell serves as master-at-arms, while Ser Robin Ryger commands the Tully guards as their captain. Rymund the Rhymer entertains as a singer.[4] Earlier servants included Septon Osmynd and Maester Kym.[5]

Riverrun is a strong three-sided castle, although not especially large. The castle is bordered on the north by the Tumblestone and on the south by the Red Fork, while on the west a third side faces a massive man-made ditch. In time of danger the sluice gates can be opened to fill a wide moat and leave the castle surrounded on all three sides by water, turning Riverrun into an island and leaving it practically unassailable. It commands a view of many leagues.[6]

The castle has sandstone walls which rise sheer from the water, its battlements are crenelated and have arrow loops, and its towers command the opposite shores.[6] Riverrun's keep is located inside.[7] Properly garrisoned, Riverrun can hold supplies for men and horses for as long as two years;[8] a garrison of two hundred men is larger than Riverrun requires in most circumstances.[9] Guardsmen wear fish-crest helms.[7] The castle's doors are made of heavy redwood.[10] 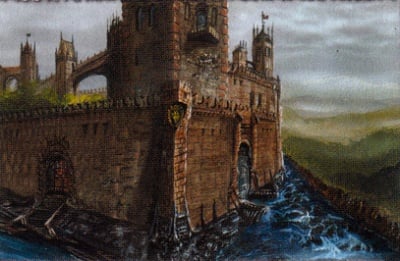 The Wheel Tower has a great waterwheel turned by the Tumblestone. It has ivy climbing alongside it, and below one makes a wide turn and ends up in churning waters. The Tumblestone leads to the Water Gate, a wide arch and a heavy iron portcullis, red with rust in its lower half. It is named so for being half in the water, and one must use a boat to go through it. Many boats are tied up within the Water Gate, secured to iron rings in the walls. The water stair leads from the lower bailey up to the castle.[7]

The keep is triangular, like Riverrun itself, and the lord's solar is triangular as well with a triangular stone balcony jutting eastwards. The solar can be reached by a spiral stairway.[6] The pillars of Hoster's great canopied bed are carved as leaping trout.[11]

The Great Hall is where large councils are held and the high seat of the Tullys sits.[6] There is a private audience chamber above the Great Hall with another high seat for the lord and a bell to ring for servants.[10]

The shortest way from the Great Hall to the keep is through the godswood,[12] a bright and airy garden[1] with elms, redwoods, wildflowers, nesting birds, and streams.[12] Its heart tree is a slender carved weirwood.[7] The sept at Riverrun is a seven-sided sandstone building amidst the gardens of the late Minisa Tully. Inside, images of the Seven are painted on marble.[10] A rainbow of light fills the sept.[1]

The dungeons of Riverrun are windowless[13] and damp,[14] their doors heavy and made of wood and iron.[6] The castle also contains kennels[15] and stables.

House Tully had served House Mudd of Oldstones, but King Tristifer IV Mudd was killed during the Andal invasion. After the king's death, Ser Axel Tully constructed the red castle at the juncture of the Red Fork with the Tumblestone, land which he had received from an Andal king, Armistead Vance.[16]

The strategic position of Riverrun brought wealth to the Tullys, who guarded the western riverlands from the Kingdom of the Rock. The castle has rarely been surrendered and has never fallen by storm.[17] The Tullys have ruled Riverrun and its rich lands for at least a thousand years.[18]

When Harwyn Hoare, King of the Iron Islands, invaded the riverlands, Riverrun was abandoned by Lord Tully, who joined the host of Lady Agnes Blackwood. Agnes's forces were betrayed by Lord Lothar Bracken, however.[19]

During Aegon's Conquest a few generations later, Lord Edmyn Tully raised the standard of House Targaryen above Riverrun, beginning the rebellion of the river lords against Harren Hoare, the King of the Isles and the Rivers. Following the burning of Harrenhal, Aegon I Targaryen named Edmyn the first Lord Paramount of the Trident.[20]

The rebellion of Harren the Red began while Aenys I Targaryen was guesting at Riverrun.[21] House Tully supported the Poor Fellows and Prince Jaehaerys Targaryen against King Maegor I Targaryen during the Faith Militant uprising.[22][16]

Riverrun was initially neutral during the Dance of the Dragons, as Ser Elmo Tully barred the castle's gates against the wishes of his father, the green-supporting Lord Grover. Elmo and his son Kermit actively supported the blacks later in the war.[16]

With Lord Hoster Tully ill at the start of the War of the Five Kings, Ser Edmure Tully is defeated by Ser Jaime Lannister in a battle under the walls of Riverrun.[26] The castle is then besieged by a Lannister host commanded by Jaime. It is relieved in the Battle of the Camps by a Stark force commanded by Robb Stark, Lord of Winterfell.[6] In the Great Hall of Riverrun Robb is elevated to King in the North by his northern bannerman as well as the river lords, who were never ruled by the old Kings of Winter.[7]

Robb allows the gathered riverlords to disperse from Riverrun to defend their own lands.[12] When Robb, the King of the Trident, leaves the riverlands to attack the westerlands, he leaves Edmure to protect Riverrun.[27] Tyrion Lannister, the acting Hand of the King, sends a group of envoys to Riverrun. Some try to free Tyrion's brother Jaime, a prisoner since the battle in the Whispering Wood, but these false envoys are hanged at the castle when the rescue attempt fails.[27]

Edmure admits smallfolk within the walls of Riverrun to protect them from war. The knight regathers riverlords[27] to defend the Red Fork from Lord Tywin Lannister's army,[10] with Blackwoods and Mallisters encamped between the rivers and Darrys, Paeges, and Pipers established north of the Tumblestone.[27] After Tywin retreats from the Battle of the Fords, Riverrun celebrates Edmure's victory and Robb's storming of the Crag.[13]

Following the Battle of the Blackwater, the Iron Throne names Petyr Baelish the Lord Paramount of the Trident, the new liege lord of the riverlands, with the castle of Harrenhal as his seat.[28] However, the Tullys of Riverrun and their bannermen remain loyal to Robb.[29]

Arya Stark hopes that the brotherhood without banners will escort her to her family at Riverrun,[14] but the outlaws instead bring her to Lord Beric Dondarrion in the hollow hill.[30]

Robb's mother, Catelyn Stark, releases Jaime from Riverrun's dungeon in an attempt to exchange him with the Iron Throne for her daughters, Sansa and Arya Stark. Ser Robin Ryger, the captain of Riverrun's guards, tries to recover Jaime but is stopped by Jaime's escort, Brienne of Tarth.[31] Catelyn remains in house arrest in the chambers of her ailing father, Lord Hoster.[32]

Having been informed that Robb has married Jeyne Westerling instead of one of Lord Walder Frey's daughters, the Freys at Riverrun angrily return to the Twins.[15]

Livid with Catelyn's release of Jaime, Lord Rickard Karstark sends his riders from Riverrun in search of the escapee, and he murders two of Robb's captives, the squires Willem Lannister and Tion Frey. Robb beheads Rickard in the castle's godswood.[11]

When Robb marches north to attend the wedding of Lord Edmure to Roslin Frey at the Twins, he leaves Ser Brynden Tully at Riverrun as the Warden of the Southern Marches. Jeyne, Robb's queen, also remains at Riverrun.[5]

Edmure is captured and Robb is killed at the Red Wedding, however, Lord Tywin Lannister, the Hand of the King, strips Riverrun from House Tully and grants it to Ser Emmon Frey, forming House Frey of Riverrun. Brynden the Blackfish continues to hold the castle against a Frey siege.[34]

Brynden expels the smallfolk from Riverrun and replenishes its provisions from the countryside.[8] Queen Regent Cersei Lannister sends her brother, Jaime, to resolve the siege of Riverrun.[35] Since the siege has become a stalemate, Jaime takes command from Ser Daven Lannister and Ser Ryman Frey.[8]

During a meeting at the castle's drawbridge, Brynden rejects Jaime's terms of surrender. After Jaime tells the captive Edmure he will sacrifice rivermen in an assault and launch Edmure's unborn child into the castle,[36] Edmure negotiates Riverrun's surrender from House Tully to House Frey.[9] Jaime resides in Lord Hoster's chambers, while Edmure is placed in another tower.[9]

Brynden escapes through the Water Gate, however, and presumably swims down the Red Fork. Lord Emmon has a large garrison of two hundred to defend his new castle, while the Blackfish's garrison is allowed to depart without arms and armor. Robin Ryger and Ser Desmond Grell agree to take the black. Ser Forley Prester commands the escort taking Edmure and the Westerlings from Riverrun to the westerlands. When snow falls at Riverrun, its people engage in a snowball war along the battlements. Maester Vyman receives Cersei's request for aid from Jaime, but the Lord Commander of the Kingsguard refuses to answer his sister.[9]

After resolving the siege of Raventree, Jaime is said to have disappeared while returning to Riverrun.[37]

She had been born a Tully, at Riverrun far to the south, on the Red Fork of the Trident. The godswood there was a garden, bright and airy, where tall redwoods spread dappled shadows across tinkling streams, birds sang from hidden nests, and the air was spicy with the scent of flowers.[1]

The southern rain was soft and warm. Catelyn liked the feel of it on her face, gentle as a mother's kisses. It took her back to her childhood, to long grey days at Riverrun. She remembered the godswood, drooping branches heavy with moisture, and the sound of her brother's laughter as he chased her through piles of damp leaves. She remembered making mud pies with Lysa, the weight of them, the mud slick and brown between her fingers. They had served them to Littlefinger, giggling, and he'd eaten so much mud he was sick for a week. How young they all had been.[2]

Harys: How could this happen? How? Even after the Whispering Wood, you had Riverrun ringed in iron, surrounded by a great host ... what madness made Ser Jaime decide to split his men into three separate camps? Surely he knew how vulnerable that would leave them?
Kevan: I would have done the same. You have never seen Riverrun, Ser Harys, or you would know that Jaime had little choice in the matter.[6]

It was late afternoon when they sighted Riverrun, rising from the narrow point where the Tumblestone joined the Red Fork. The Tully castle looked like a great stone ship with its prow pointed downriver. Its sandstone walls were drenched in red-gold light, and seemed higher and thicker than Jaime had remembered.[8]

Riverrun is mine, and no man shall ever take it from me.[9]

This was my father's solar. He ruled the riverlands from here, wisely and well. He liked to sit beside that window. The light was good there, and whenever he looked up from his work he could see the river. When his eyes were tired he would have Cat read to him. Littlefinger and I built a castle out of wooden blocks once, there beside the door. You will never know how sick it makes me to see you in this room, Kingslayer. You will never know how much I despise you.[9]