Riverrun is the ancestral castle of House Tully, held by them for over a thousand years.[1] It is situated in the western riverlands, at the point where the Tumblestone and Red Fork rivers meet.[2] Riverrun is north of Pinkmaiden and northwest of Acorn Hall. The castle sits along the river road, which links Lannisport and the crossroads.[3]

Riverrun is a strong three-sided castle, although not especially large. The castle is bordered on the north by the Tumblestone and on the south by the Red Fork, while on the west a third side faces a massive man-made ditch. In time of danger the sluice gates can be opened to fill a wide moat and leave the castle surrounded on all three sides by water, turning Riverrun into an island and leaving it practically unassailable. It commands a view of many leagues.[4]

The castle has sandstone walls which rise sheer from the water, its battlements are crenelated and have arrow loops, and its towers command the opposite shores.[4] Riverrun's keep is located inside.[5] Properly garrisoned, Riverrun can hold supplies for men and horses for as long as two years;[6] a garrison of two hundred men is larger than Riverrun requires in most circumstances.[7] Some guardsmen wear fish-crest helms.[5]

House Tully ruled Riverrun and its rich lands for a thousand years.[1] Axel Tully constructed the red castle upon land at the juncture of the Red Fork with the Tumblestone, which he had received from Armistead Vance.[9] The castle has rarely been surrendered and has never fallen by storm.[10]

When Harwyn Hoare invaded the riverlands, Riverrun was abandoned by Lord Tully, who joined the host of Lady Agnes Blackwood. Agnes's forces were betrayed by Lord Lothar Bracken, however.[11]

During the War of Conquest, Lord Edmyn Tully raised the standard of House Targaryen above Riverrun, beginning the rebellion of the river lords against Harren Hoare, the King of the Isles and the Rivers. Following the burning of Harrenhal, Aegon I Targaryen named Edmyn the Lord Paramount of the Trident.[12]

The rebellion of Harren the Red began while Aenys I Targaryen was guesting at Riverrun.[13] Riverrun supported the Poor Fellows against Maegor I Targaryen.[14]

Riverrun was initially neutral during the Dance of the Dragons, as Ser Elmo Tully barred the castle's gates against the wishes of his father, the green-supporting Lord Grover. Elmo and his son Kermit actively supported the blacks later in the war.[9]

Petyr Baelish spent part of his youth at Riverrun with the Tully siblings, Catelyn, Lysa, and Edmure.[15] 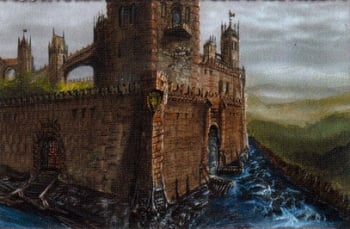 Following the Battle of the Blackwater, the Iron Throne names Petyr Baelish the Lord Paramount of the Trident, the new liege lord of the Riverlands, with the castle of Harrenhal as his seat.[17] However, the Tullys of Riverrun and their bannermen remain loyal to Robb Stark, the King of the Trident.[18]

When Robb leaves to attend the wedding of Edmure at the Twins, he leaves Ser Brynden Tully at Riverrun as the Warden of the Southern Marches.[19]

Following the death of Robb at the Red Wedding, Lord Tywin Lannister strips House Tully of Riverrun and grants it to Emmon Frey, forming House Frey of Riverrun. However, Brynden continues to hold the castle against a Frey siege.[20]

Jaime Lannister negotiates the end of the Siege of Riverrun and the surrender of the castle from House Tully to House Frey. Brynden escapes through the Water Gate, however, and presumably swims down the Red Fork. Lord Emmon has a large garrison of two hundred to defend his new castle, while the Blackfish's garrison is allowed to depart without arms and armor. When snow falls at Riverrun, its people engage in a snowball war along the battlements.[7]

Riverrun is mine, and no man shall ever take it from me.[7]