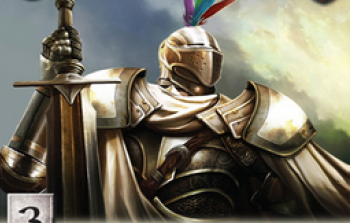 Ser Robert Strong is a knight acquainted to Qyburn. A giant of a man, eight feet tall,[1] he is to fight for Cersei Lannister in her trial by combat.[2]

By Qyburn's suggestion, King Tommen I Baratheon names him the newest member of the Kingsguard.[2]

Ser Robert never shows his face, hiding it constantly under his greathelm. He apparently has no physiological necessities, consuming neither food nor drink.[2]

According to Qyburn, Ser Robert has made a vow of silence, supposedly one of not speaking until "all of [King Tommen's] enemies are dead and evil has been driven from the realm".[1]

He is eight feet tall, with legs as thick as trees, a chest worthy of a plow horse, and shoulders that would not disgrace an ox. His armor is steel plate enameled white, over gilded mail. A greathelm hides his face, with seven silken plums in the rainbow colors of the Faith streaming from the crest. A pair of golden seven-pointed stars clasp his white cloak to his shoulders.[1]

Before her walk of atonement, Queen Cersei sends word to Qyburn to replace the empty spot on the Kingsguard with one that would serve as her champion in a trial by combat. When Queen Cersei arrives at the Red Keep after walking naked from the Great Sept of Baelor, Ser Robert Strong lifts her up, carrying her to the gatehouse, and is then introduced as her champion by Qyburn.[1]

Later on, Ser Kevan Lannister remembers that Ser Meryn Trant claimed that Robert took neither food nor water, and Ser Boros Blount said he had never seen him use the privy. Kevan has inexplicit suspicions about the identity of the man, suspicions he believes are shared by Lord Mace Tyrell and Lord Randyll Tarly. Kevan makes clear to the small council, however, that it is in everyone's best interests that Strong's identity not be questioned and that he must prevail in Cersei's trial. If Strong failed and Cersei was found guilty, Tommen's legitimacy as king and, thus, Margaery Tyrell's status as queen would be thrown into question, hurting both House Lannister and House Tyrell.[2]

Kevan Lannister had a strong suspicion of just who this Ser Robert really was beneath that gleaming white armor. A suspicion that Mace Tyrell and Randyll Tarly no doubt shared. Whatever the face hidden behind Strong's helm, it must remain hidden for now. The silent giant was his niece's only hope. And pray that he is as formidable as he appears.[2]