Rodrik Harlaw is the Lord of Harlaw, Lord of the Ten Towers, and head of House Harlaw. He is nicknamed Rodrik the Reader because he is always reading, which is uncommon amongst the ironborn.[3] He is the captain of the Sea Song.

An average-looking man, Rodrik has brown hair and eyes and a short, neat beard that is grey. He has requested a Myrish lens to assist with his vision.[3]

Rodrik unsuccessfully advised Balon Greyjoy, Lord of the Iron Islands, not to rebel against King Robert I Baratheon. Rodrik had two tall sons who died in the sea battle off Fair Isle during Greyjoy's Rebellion.[3]

When the Faith of the Seven was still tolerated in the Iron Islands, Rodrik kept septons at Ten Towers to help care for his books, which he reads in the Book Tower. Rodrik's sister, Gwynesse, insists that she should rule Ten Towers, as she is seven years his elder.[3]

Rodrik is a widower,[2] who does not expect to wed again, and his heir is his cousin Harras, the Knight of Grey Garden.[3] 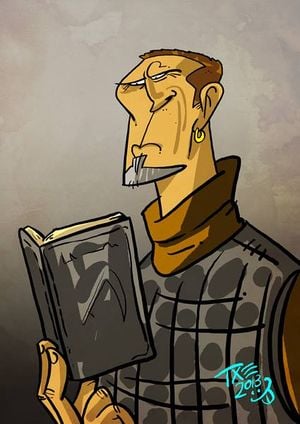 Rodrik the Reader by TheMico ©

After the death of Balon Greyjoy, King of the Isles and the North, Rodrik supports his niece, Balon's daughter Asha, and calls her supporters to Harlaw.[5] Rodrik is visited by Lords Baelor Blacktyde and Tristifer Botley prior to the kingsmoot on Old Wyk, which has been called by Aeron Greyjoy.[3]

Rodrik assembles those faithful to Princess Asha at the Ten Towers. Hotho Harlaw, who wants Rodrik to marry his daughter, brings his lord a copy of Archmaester Marwyn's Book of Lost Books. Rodrik tries to convince Asha not to attend the kingsmoot, fearing a bad outcome. He offers to name Asha as the heir to Ten Towers, with the island of Harlaw passing to Ser Harras Harlaw, but she refuses.[3]

At the kingsmoot Rodrik is one of the first to call Asha's name. However, her uncle, Euron Greyjoy, is chosen king instead.[6]

After the taking of the Shields, Rodrik is spotted by Lord Captain Victarion Greyjoy and Nute the Barber talking with Lords Gorold Goodbrother and Dunstan Drumm in the yard of Lord Hewett's castle on Oakenshield. They discuss their fears that the gains from the battle are little compared to the enmity of the Reach they have earned. During the feast in House Hewett's hall, King Euron tells the ironborn they will conquer Westeros. Rodrik is skeptical of Euron's planning as well as his claims of having sailed the Smoking Sea and seen Valyria. With Euron giving Greyshield to Harras, Hotho feels that he is now Rodrik's heir.[4]

At Deepwood Motte, Asha recalls how after Euron was named the new king at the kingsmoot, Rodrik told her to flee while her uncle was busy. He also recommended she read Archmaester Haereg's History of the Ironborn, which recounts the only time a kingsmoot decision was overturned.[7]

Rodrik: I prefer my history dead. Dead history is writ in ink, the living sort in blood.


Asha: Do you want to die old and craven in your bed?


Rodrik: How else? Though not till I'm done reading.[3]
—Rodrik and Asha Greyjoy

Euron: I have sailed the Smoking Sea and seen Valyria.


Euron: Reader, you would do well to keep your nose in your books.[4]
—Rodrik and Euron Greyjoy

Harlaw was not the largest of the Iron Islands, but it was the richest and most populous, and Lord Rodrik's power was not to be despised.[3]

Lord Rodrik was seldom seen without a book in hand, be it in the privy, on the deck of his Sea Song, or whilst holding audience.[3]