Rohanne Webber, known as the Red Widow, was the Lady of Coldmoat and head of House Webber during the reign of King Aerys I Targaryen. She was the daughter of Lord Wyman Webber.[1] Later, she married Lord Gerold Lannister and became Lady of Casterly Rock.[3]

Lady Rohanne was short (4'11"), slim, and had strawberry-blond red hair and grey-green eyes. She had a dimpled chin, a snub nose, and freckles. Rohanne usually kept her hair bound in a braid that reached down to her thighs, and she frequently played with it.[1]

Rohanne tried hard to appear ferocious to other lords and knights. She enjoyed archery.[1]

During her childhood, Rohanne was fond of young Addam Osgrey, who served as her father Wyman's page and later squire at Coldmoat. The two had an innocent romance, though it never went past a few kisses. Because of this relationship, Addam's father, Ser Eustace Osgrey, proposed that they marry, but Lord Wyman refused him. Instead, Rohanne was married to a different squire of her father's. During the First Blackfyre Rebellion, her father and husband fought in the Battle of the Redgrass Field in 196 AC, on the side of House Targaryen. Rohanne's husband, twelve years old, was slain in battle, and she became a widow for the first time at the age of ten. Addam also died during the battle, fighting on the side of House Blackfyre as his father's squire, which caused Rohanne to develop a grudge against Ser Eustace.[1]

At age thirteen, Rohanne was married again to a fifty-four-year-old man, who soon died of a chill. Six months after his death, she gave birth to their son, who was weak and died within three days. Her third husband, Ser Simon Staunton, choked to death on a chicken bone, while her fourth husband, Ser Rolland Uffering died of the Great Spring Sickness. Rohanne bore a daughter by either her third or fourth husband, but the girl did not live a year. Because of the unfortunate deaths of her husbands and children, Rohanne was called the Red Widow, and the smallfolk accused her of poisoning her husbands and being a witch who sold her unborn babies to the Lord of the Seven Hells so that he would teach her the black arts.[1]

Before his death, Lord Wyman attempted to marry Rohanne to his castellan, Ser Lucas Inchfield, but she refused him. As such, Wyman stated in his will that Rohanne had two years to marry after his death. If she would remain unwed, Coldmoat would be granted to her cousin, Ser Wendell Webber. On his deathbed, Rohanne's father charged Lucas to scare off unworthy suitors, though in the two years that would follow, Lucas would attempt to scare off all who traveled to Coldmoat. Lucas's behavior, in addition to the rumors concerning the deaths of Rohanne's four husbands and the two children who died, caused the number of suitors to be lower than would have been expected based on her beauty and status, but she did have several suitors. Among them were Cleyton Caswell and Simon Leygood, both rather persistent, and Ser Gerold Lannister, who sent her flattering letters from Casterly Rock, but whom Rohanne did not believe to be willing to leave the westerlands and his position at his brother's seat.[1] 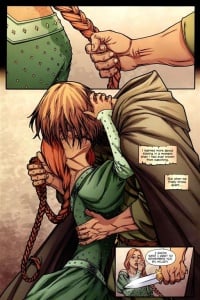 Lady Rohanne continued to rule Coldmoat in 211 AC, though she had only until the new moon to marry in order to keep her seat. When her people built a dam on the Chequy Water, Ser Bennis of the Brown Shield, working for Ser Eustace Osgrey, assaulted one of her workers. Ser Duncan the Tall came to Coldmoat on behalf of Eustace to pay the blood price, but she rejected the offer. Lady Rohanne brought her forces to the Chequy Water, where she was confronted by Duncan, Eustace, and Duncan's squire, Egg. She accepted a trial by battle, choosing Ser Lucas Inchfield as her champion to fight Eustace's champion, Duncan. Lucas Longinch was killed in the trial, however, and the valor of Duncan reconciled Eustace and Rohanne. Rohanne visited Addam Osgrey's grave at Standfast, and when she began to weep, Eustace comforted her. They married the next day, allowing Rohanne to keep Coldmoat.[1]

During Duncan's attempts to defuse the feud between Eustace and Rohanne, he and she developed a certain attraction. When he woke after nearly being killed in the trial by combat and found Rohanne had married Eustace, and then never visited him while he was recovering, Duncan felt rejected. On the day he left Coldmoat, Rohanne tried to offer Duncan a place as captain of her guards, but he refused the offer. She then offered him one of her horses to give him something to remember her by, but Duncan refused that as well. At the conclusion of their argument, they kissed passionately, and Duncan cut off her famous braid to keep to remember her by.[1]

Rohanne owned a courser with some Dornish sand steed ancestry called Flame, which she tried to gift to Ser Duncan,[1] and a young palfrey that she gifted to Egg[1] and that was eventually named Rain.[4] 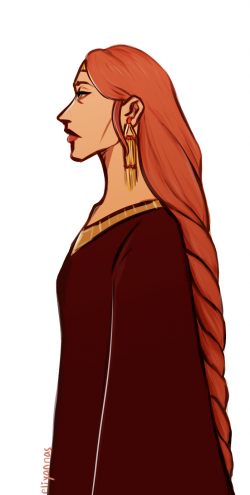 To spite the widowed Lord Gerold, Lady Ellyn Reyne named her first daughter, Rohanne Tarbeck, after Rohanne Webber in 240 AC, according to a semi-canon source.[5]