Difference between revisions of "Roose Bolton"

Roose Bolton is the head of House Bolton and Lord of the Dreadfort. Though mild-mannered, he is cold, calculating, and capable of great cruelty. He speaks softly, never raising his voice, forcing those who listen to do so intently.[2] He receives regular leechings, which he believes to improve his health, prompting some to call him "The Leech Lord". 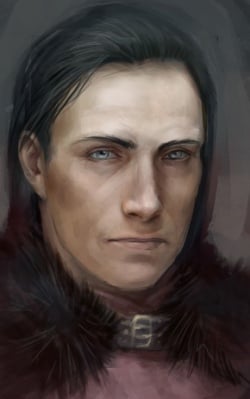 Roose is patient with a cold cunning, possessing a skill for strategy and a calculating nature. His body is "soft hairless".[3] He is of average size and is "not handsome but not quite plain", with his only noticeable feature being his eerie eyes, which are as pale and strange as two white moons, to Jaime they are paler than stone, darker than milk. [4][5] His skin is pasty white, most likely due to the leechings.[2] See also this collection of images. His voice is spider soft.

A collared and chained Theon Greyjoy in his persona of Reek contemplated Roose Bolton:

His face was clean shaved, smooth skinned, ordinary, not handsome but not quite plain . Though Roose had been in battles, he bore no scars. Though well past forty, he was as yet unwrinkled, with scarce a line to tell of the passage of time. His lips were so thin that when he pressed them together they seem to vanish altogether.

There was an agelessness to about him, a stillness; on Roose Bolton’s face, rage and joy looked much the same. All he and Ramsay had in common were their eyes. His eyes are ice. Reek wondered if he ever cried. If so, do the tears feel cold upon his cheeks?

Once, a boy called Theon Greyjoy had enjoyed tweaking Bolton as they sat at council with Robb Stark, mocking his soft voice and making japes about leeches. He must have been mad. This is no man to jape with. You had only to look at Bolton to know that he had more cruelty in his pinky toe than all the Freys combined.

Roose Bolton practices the banned and now illegal tradition of the First Night privilege. He is however extremely discreet with his activities in order to avoid the attention and possible ire of House Stark.

Lord Roose fought at the Battle of the Trident during Robert's Rebellion. When Ser Barristan Selmy, seriously wounded, was brought before Robert Baratheon, Roose counseled that they should kill him. Robert ignored Roose and spared Ser Barristan's life, sending his own maester to tend to his wounds.[6]

Just before the War of the Five Kings, Roose's trueborn son Domeric Bolton, the only one who survived the cradle, died of a "bad belly." Having no other trueborn heirs, Roose then brought his bastard son Ramsay Snow to the Dreadfort and made him his unofficial heir.

Bolton answers his liege's call when Robb Stark summons his banners to aid his grandfather Hoster Tully and his father Lord Eddard. Due to his calculating caution, Bolton was given command of the host sent to distract Lord Tywin Lannister, consisting of all the Northern foot and some of the horse. He marched through the night and launched a surprise attack in the early morning, but was defeated by Lord Tywin.[7] However, he was able to retreat in good order, reforming the battered remnants of his army on the causeway before Moat Cailin.[8] 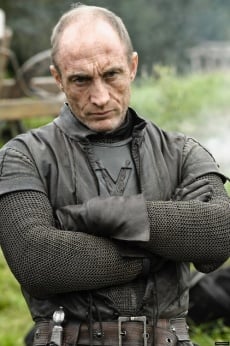 Roose Bolton in the TV series.

During the war he marries his third wife, Walda Frey, granddaughter of Lord Walder Frey, who has allied his house to Robb's. In an effort to limit Lord Tywin Lannister's options, who marched from Harrenhal in an attempt to meet Robb Stark in the Westerlands, Ser Edmure Tully commands Roose to join up with Ser Helman Tallhart coming down from the Twins and to retake Harrenhal.[9]

Hoping to take Harrenhal without weakening his army, Roose makes a deal with Vargo Hoat, leader of the Brave Companions, unsavory sellswords in the employ of Lord Tywin. The Companions pretend to take a group of Bolton's men prisoner that then seized the castle, taking out the small Lannister garrison left behind and opening the gates to the rest of Bolton's men. This was done with the aid of an incognito Arya Stark and the assassin Jaqen H'ghar. While at Harrenhal, Roose takes Arya as his cupbearer, mistaking her for a commoner.[5] After Winterfell's fall to Theon Greyjoy and Lord Tywin's victory in the Battle of the Blackwater, relations between Vargo Hoat and Roose become strained as Vargo suspects that Roose would turn on Robb Stark to support the Lannisters. In the meantime, Roose's son Ramsay has married and killed Donella Hornwood and taken her lands; at Roose's direction he goes on to betray the other Northmen and seize Winterfell from Theon. Roose feigns ambivalence if the Starks decide to execute Ramsay for his crimes.

After the Brave Companions take Jaime Lannister hostage, Vargo has Jaime's sword-hand cut off to drive a wedge between Roose and Tywin. The ploy did not work however, as Roose receives Jaime's assurance that he would not be held responsible for Jaime's injury. Before leaving, Roose tells Jaime to give his regards to Lord Tywin; Jaime responds that Roose should give his regards to Robb Stark.[10]

Robb summons Roose to aid in retaking the North from the ironborn. However, Roose has decided that the Stark cause is lost and is already plotting with Tywin, Walder Frey, and his acknowledged son Ramsay to bring them down. He sends a full third of the Northern infantry (including none of his own troops) to attack Duskendale, knowing they would be massacred by the joint Lannister/Tyrell forces. On the march to the Twins, he takes his time when crossing the Trident and allows his rearguard to be ambushed by Gregor Clegane. On the other side, he leaves the Stark loyalists to guard the river, taking only Dreadfort and Karhold men with him; the latter still incensed by Robb's execution of their lord Rickard. [11]

During the Red Wedding, Roose mumbles an excuse to get out of the hall. The bedding and playing of "The Rains of Castamere" is the signal for the Freys to attack their guests. Roose returns into the hall dressed in mail armor. Robb has already been wounded by arrows. Roose approaches him and kills him while saying: 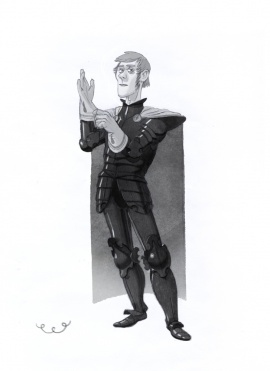 Outside the castle, the Frey and Bolton soldiers attack their fellow Northern/Riverland forces and annihilate them. For this service, Tywin gives Roose the title of Warden of the North and raises House Bolton's status to the principal house of the North and one of the ruling families of Westeros. Roose also receives a royal decree of legitimization for his bastard son and heir Ramsay.

Lord Roose marches north with his own forces from the Twins, augmented by two thousand Freys under the command of Ser Aenys Frey and Ser Hosteen Frey.[13]

After Moat Cailin surrenders to Ramsay thanks to a browbeaten Theon Greyjoy, Roose meets his son and introduces him to his bride "Arya Stark" (actually Jeyne Poole). Roose is greatly displeased by his son's actions, stating as much to Theon. Roose thinks that Ramsay is too loud and obnoxious.[4]

Upon arriving at Winterfell, Roose finds the ruined castle now a refuge of more then two dozen squatters, he tells them that if they serve well he will be merciful. They are used for a labour force in rebuilding Winterfell, after the work is completed Roose has them all hanged, true to his word he was merciful and did not flay a one.

At Ramsay's wedding feast, Roose does not eat any of the food or drink served to him unless he sees Wyman Manderly, who brought the food, eat of the same dish. Roose's goodsister Lady Barbrey Dustin states that this is all a game to Roose,

Roose has no feelings, you see. Those leeches that he loves so well sucked all the passions out of him years ago. He does not love, he does not hate, he does not grieve. This is a game to him, mildly diverting. Some men hunt, some hawk, some tumble dice. Roose plays with men. You and me, these Freys, Lord Manderly, his plump new wife, even his bastard, we are but his playthings. [14]

Despite being named Warden of the North, Roose's support among the Northlords is grudging. The first to declare for him were the Dustins and Ryswells, to whom he is related in the female line. The faction of House Umber led by Hother Whoresbane declares for him since the Greatjon is in Frey captivity, and the Cerwyns, Lockes, and Manderlys send men as well. Arnolf Karstark, the Karhold castellan who publicly declared for Stannis, is secretly in league with Roose and awaits the moment to turn his cloak.

Roose, Ramsay and his army remain at Winterfell awaiting the attack of Stannis Baratheon's host. Several Bolton men are murdered during the wait, and suspicion is cast on several of the present Stark bannermen.[15] In truth, however, Mance Rayder and several wildling spearwives on a mission to free Arya Stark commit the murders.[16] The murders raise tensions within the castle. Tempers flare when Lord Manderly insults one of the dead Freys; a clash ensues that leads to the deaths of several men-at-arms.

After learning that Stannis' army is three days march from Winterfell, Roose sends out the Freys and Manderlys, as well as Ramsay and his men, but keeps much of his own strength behind in Winterfell. According to Theon Greyjoy, Roose is keeping his own men back as a reserve, as he once did in the Riverlands, to weaken potential rivals.[17]

"No tales were ever told of me. Do you think I would be sitting here if it were otherwise? Your amusements are your own, I will not chide you on that count, but you must be more discreet. A peaceful land, a quiet people. That has always been my rule. Make it yours."[4]

- Roose to his bastard son Ramsay.

"Fear is what keeps a man alive in this world of treachery and deceit. Even here in Barrowton the crows are circling, waiting to feast upon our flesh. The Cerwyns and the Tallharts are not to be relied on, my fat friend Lord Wyman plots betrayal, and Whoresbane...the Umbers may seem simple but they are not without a certain low cunning. Ramsay should fear them all, as I do."[4]

This page uses content from the English Wikipedia. The original content was at House Bolton. The list of authors can be seen in the page history of House Bolton. As with A Wiki of Ice and Fire, the content of Wikipedia is available under the Creative Commons Attribution-ShareAlike License.