Samwell Tarly is the eldest son of Lord Randyll Tarly and his wife Melessa Florent. He is popularly called 'Sam', and disparagingly referred to as 'Ser Piggy.' He is a steward of the Night's Watch. He becomes a POV Character in A Storm of Swords. In the TV series he is played by John Bradley.[2] 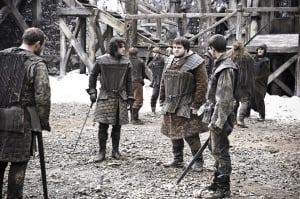 Samwell is not helped by any of Ser Alliser's training and remains an incompetent warrior. Because of this he is initially deemed not ready to take his vows and become a man of the Night's Watch with Jon and his fellow recruits. Jon, fearful of what will happen to Sam once he is no longer able to protect him, persuades Maester Aemon to allow him to join the Stewards, convincing him that despite his uselessness as a soldier, Sam's literacy and intelligence may be of great value to the Watch. Aemon agrees, and gives Samwell a position assisting him in Castle Black's rookery and library, displacing Chett. Despite having been born and raised into the Faith of the Seven, Samwell decides to take his Night's Watch vow with Jon Snow at a Heart Tree. He is able to impress Lord Commander Mormont by noting some of the odd details of the corpses of Othor and Jafer Flowers. He is among the group of friends who stop Jon from abandoning the Night's Watch and forswearing himself.[3]

Sam joins the Great Ranging to the Far North and is placed in charge of the ravens as Lord Commander Mormont's aide.[4] When the expedition stays a night at Craster's Keep he is befriended by Gilly, one of daughter-wives of Craster, who is pregnant and fearful that if she has a boy, Craster will sacrifice it to the Others. Samwell, unsure of what to do, turns to Jon for help, but there is nothing that Jon can do.[5] 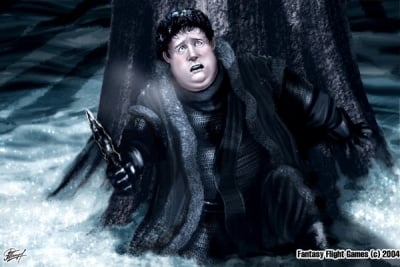 When the Others attack the Watch camp at the Fist of the First Men, Sam manages to send word of the attack to Castle Black and is able to escape with a group of about fifty survivors led by Jeor Mormont. The march is hard on Sam and he is helped by his friends Grenn and Small Paul. Eventually they are separated from the majority of the men. Paul, who carried Sam for much of the journey, is attacked and killed by an Other, but the weight of his body disarms it as he dies. Samwell, who is carrying a dragonglass dagger that was among the cache found by Ghost, uses the opportunity to attack, and blindly stabs the Other, who dies instantaneously from the dragonglass blade. Killing the Other earns him the nickname "Sam the Slayer", although many say this mockingly as they do not believe his feat.[6]

He and Grenn rendezvous with the remaining survivors at Craster's Keep, where Gilly gives birth to a son. Shortly thereafter, violence erupts in the keep, with some Night's Watch men believing that Craster was holding out on the food he provided for the Watch, and others harboring mutinous intentions toward Commander Mormont. Craster and Mormont are both killed in the fighting, Before Mormont dies he gives Sam his dying wish, that Jorah, his son, join the Watch.[7]

Sam is forced to flee, joined only by Gilly and her newborn. They make it as far as a village Sam believes to be Whitetree but are then attacked by wights, including a reanimated Small Paul, who attackes Sam first. Sam fights him off and stabs him with the dragonglass dagger, but it proves ineffective. Desperately, Sam strikes him with a piece of charred wood, which catches him on fire, killing him. They run, but are beset by additional wights, and are saved at the last moment by Coldhands.[8]

Gilly and Sam are led back to the wall by Coldhands, who has informed them that there will be one in the Nightfort that must be sent to him. Entering the Nightfort through the castle's Black Gate, Samwell encounters Bran Stark, along with Hodor, and Meera and Jojen Reed, whom he leads back to Coldhands.[9]

After leaving the Nightfort on the south side of the wall, Sam and Gilly join Ser Denys Mallister and Bowen Marsh's party, also en route to Castle Black. They arrive after the Battle of Castle Black, with Stannis Baratheon present and urging the swift election of a new Lord Commander and threatening to name one himself if none can achieve the required two-thirds majority. In the voting, Janos Slynt is gaining ground on the leading candidates Cotter Pyke and Denys Mallister. Believing Slynt would be a disastrous Lord Commander, Sam approaches Pyke and Mallister independently, and lies to each regarding Stannis's intentions to name the other to the office, thus convincing them both to support Jon Snow as a compromise candidate, leading to Jon's election. 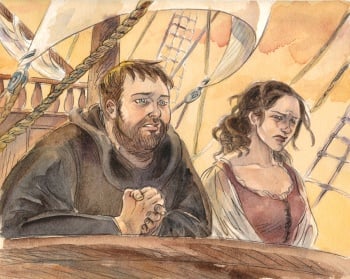 One of Jon Snow's first acts as Lord Commander is to send Samwell South to Oldtown so that he might study there as a maester for Castle Black. With him he sends Dareon, whom he appoints as a recruiter for the Night's Watch, as well as Maester Aemon and the infant son of Mance Rayder, so as to deprive Melisandre of the chance to sacrifice them for their king's blood. He also sends Gilly, separating her from her child, so that she might nurse Rayder's son. Maester Aemon falls ill on the voyage, however, and stopping in Braavos they are forced to spend their coin on an inn and a healer. Aemon's condition worsens nonetheless, though he briefly wakes and wishes to hear the stories of Daenerys's dragons that are spreading throughout the city, having the revelation that Daenerys may be the true fulfillment of the prophecy of the prince that was promised.

Samwell urges Dareon to sing at the local taverns to earn money so that they might buy passage on a ship to Oldtown, but Dareon spends most of what he earns on wine and trade from the city's whores. Samwell confronts Dareon in a brothel and accuses him of breaking his vows, and Dareon responds with his intention to abandon them and desert the Night's Watch, resulting in a fight whereupon Samwell is pulled off of Dareon and thrown into a canal. He is pulled out by Xhondo, who heard him speaking of dragons and had seen them in Qarth. Xhondo offers them passage on his ship, the Cinnamon Wind, in exchange for work and for some of the last of their possessions.

Maester Aemon dies early in that journey, and in mourning for his death Gilly briefly becomes a lover to Samwell. She names the child after Aemon, and it is planned that upon landing at Oldtown she will be sent to Samwell's childhood home of Horn Hill with the story that her child is a bastard fathered by Sam. Samwell continues to the Citadel, where he encounters Alleras, who has sought him out and brings him straight to Archmaester Marwyn, who asks Samwell to repeat for him Aemon's final words. Upon hearing the story, Marwyn immediately departs the city with the stated intention of going to Daenerys and becoming her maester.

The worst isn’t done. The worst is just beginning, and there are no happy endings.[10]

I am still craven, Jon. No matter where he went in this wide world, his fears went with him.[11]