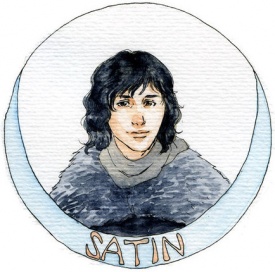 Satin is a recruit of the Night's Watch. He got his name from the brothel where he had been born and raised, and where he also worked as a whore.[1] He is from Oldtown.[1]

During the Battle of Castle Black, Satin claims to be eighteen years old.[1] He has dark eyes, soft skin and black hair in curls.[1] He eventually grows a beard.

Before the Great Ranging, Jon watches the new recruits being trained by Ser Endrew Tarth. Satin is among them.[2] He and his group were reportedly taken by Conwy from a dungeon in Gulltown.[2]

Satin helps defend the King's Tower at Castle Black from the wildlings, fighting alongside Jon.

Satin tears off half a finger nail in archery practice.[3]

He finishes his training and is appointed to be a steward. He goes with Jon Snow to take his oath in the weirwood grove in the Haunted Forest[4]. This is strange as Satin previously stated he believed in The Seven, and thus would not take his oath at a weirwood.[1] When Dolorous Edd is sent to assist in the garrison of Long Barrow, Lord Commander Jon Snow selects Satin to be his new steward. This angers several members of the Watch hierarchy such as Bowen Marsh who feel that a former whore should not be the personal steward of the Commander.[5]