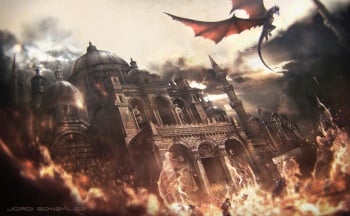 Maegor I Targaryen, on the back of Balerion, destroys the Sept of Remembrance, as depicted by Jordi Gonzalez Escamilla in The World of Ice & Fire.

The Sept of Remembrance was one of the first septs built in King's Landing.[1] It was constructed on the Hill of Rhaenys in memory of Aegon I's queen Rhaenys Targaryen.[1] The sept was used as the base of the Warrior's Sons during the Faith Militant uprising, and was destroyed in the conflict by Maegor I in 42 AC.[2] In its place Maegor later built the Dragonpit.[2]

The Sept of Remembrance was the third sept built in King's Landing.[1] It was constructed at the top of the Hill of Rhaenys, in memory of Aegon I Targaryen's sister-wife Rhaenys,[3] who was killed in 10 AC during the First Dornish War.[4] It seems likely that construction of the sept began during the reign of Aegon I.[N 1]

In 41 AC, it was used for the controversial marriage of Aenys I's children Aegon and Rhaena.[3] This marriage of two siblings led to the Faith Militant uprising. During the uprising, the Sept of Remembrance was fortified by the Warrior's Sons into "a citadel that could stand against the king", according to Maester Yandel, and became their base of operations.[5][2]

On the thirtieth day since the trial of seven between Ser Damon Morrigen and King Maegor I Targaryen, hundreds of Warrior's Sons gathered for their morning prayers. Maegor mounted his dragon, Balerion, and unleashed dragonfire without warning. During the burning of the Sept of Remembrance some tried to flee, but were cut down by the archers and spearmen that Maegor had ready. It is said that the screams of the burning and dying men were heard throughout King's Landing. The burning was so immense that scholars claim there was a pall over the capital for seven days.[2]

Afterwards, Maegor had the ruins of the Sept cleared, and ordered the construction of a large domed stable, the Dragonpit, where Targaryens could house their dragons.[2]