Ser Shadrich is a wiry, fox-faced man with a sharp nose and bristly orange hair.[1] Though he is not more than five foot two,[1] short enough to be mistaken for a boy, he has the face of an older man, with wrinkles by his mouth and hard eyes. He also has a scar beneath his ear.[4]

Shadrich is not a tourney knight, instead saving his valor for the battlefield. He has a cocksure manner and is sharp-witted.[1] 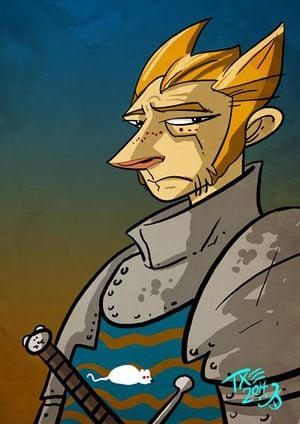 Ser Shadrich fought for Stannis Baratheon in the Battle of the Blackwater. After Stannis's defeat, Shadrich was forced to pay a ransom he could not afford, meaning that he was ruined financially. Shadrich becomes a hired knight for the merchant Hibald and his serving men.[1]

While Shadrich is escorting Hibald's party to Duskendale, they are joined by Brienne of Tarth, Ser Creighton Longbough, and Ser Illifer the Penniless. When Brienne says she is searching for her lost sister, Shadrich realizes that it is Sansa Stark whom Brienne seeks. Shadrich explains Varys is offering a plump bag of gold for Sansa, which would return him to the status he enjoyed before the Blackwater.[1] Shadrich offers to split the reward, but Brienne carries on pretending she is seeking her sister. Shadrich becomes sarcastic as he knows she is lying.[1]

After Brienne abandons her traveling companions at the Old Stone Bridge,[1] she worries that Shadrich might be following her. It is actually Podrick Payne who follows Brienne after Duskendale, however.[5]

Ser Shadrich eventually turns up at the Gates of the Moon as a newly-hired hedge knight in service to Lord Petyr Baelish. Along with Ser Byron the Beautiful and Ser Morgarth the Merry, Shadrich is introduced to Alayne Stone (a disguised Sansa Stark) in the west tower of the Gates.[6]

When Alayne is greeting guests the day before the tourney for the Brotherhood of Winged Knights is to be held at the Gates of the Moon, Ser Shadrich prevents her from falling when the girl bumps into the smaller man. He tells her and Myranda Royce that he does not intend to participate in the joust. Later, at the feast, Alayne dances with Shadrich, among others.[4]

Shadrich: Some call me the Mad Mouse. The brown is for the lands I've roamed, the blue for the rivers that I've crossed. The mouse is me.


Brienne: And are you mad?


Shadrich: Oh, quite. Your common mouse will run from blood and battle. The mad mouse seeks them out.[1]
—Shadrich and Brienne Tarth

You are not the only hunter in the woods. I seek for Sansa Stark as well.[1]

We mice are quiet creatures.[4]

Myranda: Will you be seeking wings?


Shadrich: A mouse with wings would be a silly sight.
Alayne: Perhaps you will try the melee instead?


Shadrich: A good melee is all a hedge knight can hope for, unless he stumbles on a bag of dragons. And that's not likely, is it?.[4]
—Myranda Royce, Shadrich, and "Alayne Stone"

He had the sort of easy arrogance that comes with skill at arms.[1]

Ser Shadrich was so short that he might have been taken for a squire, but his face belonged to a much older man.[4]