Shireen Baratheon is a noblewoman of House Baratheon of Dragonstone, and is the daughter and only child of Lord Stannis Baratheon and Lady Selyse Florent.[3] In the television adaptation Game of Thrones, she is portrayed by Kerry Ingram.

When introduced in A Song of Ice and Fire, Shireen is nine years old.[4] Shireen is regarded as a sad, sweet, gentle child, but she is not considered pretty.[5] She has blue eyes, but inherited her father's square, jutting jaw, and her mother's large ears.[4][5] Greyscale has left half of her left cheek and most of her neck covered in cracked and flaking, grey and black stony skin. She has suffered from nightmares since infancy.[4]

Born at Dragonstone[2] in 289 AC[1] to Lord Stannis Baratheon and Lady Selyse Florent, Shireen contracted greyscale as an infant. The disease almost killed her, and left her disfigured. Cressen, Dragonstone's maester, feels that her sadness is a mark of his failure.[4]

As the daughter and heir of Stannis, Shireen resides in Dragonstone and is educated by Maester Cressen. She is usually seen in the company of Patchface, their mad fool that she calls "Patches", though his ravings sometimes frighten her.[4] 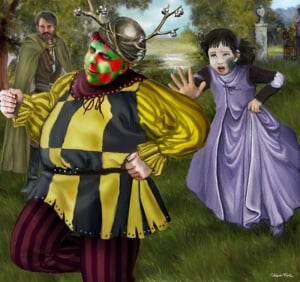 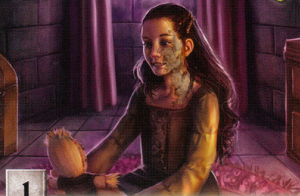 Shireen is on Dragonstone with her father, Stannis, and mother, Selyse. Maester Cressen pities the sad-looking child, and has his assistant, Maester Pylos, show her the white raven that has arrived from the Citadel to announce the onset of autumn. Shireen tells Cressen about her nightmares that dragons are coming to eat her, and he tries to reassure her, saying that the stone dragons of Dragonstone can never come to life. She is uncertain, as Melisandre has said the red comet is "dragonsbreath", and Cressen reassures her that it is just a comet and will soon be gone.[4]

Cressen suggests to Stannis that Shireen be betrothed to Lord Robert Arryn and sent to the Eyrie to make an alliance with Lady Lysa Arryn, whom he thinks will want vengeance for Lord Jon Arryn's death, but Stannis is unsure of the idea.[4]

Stannis writes a letter to the lords of the Seven Kingdoms, informing them that Joffrey, Myrcella, and Tommen Baratheon are the offspring of incest between Queen Cersei Lannister and her brother, Ser Jaime Lannister. In retaliation, the small council under Tyrion Lannister discusses schemes to spread rumors that Shireen is not Stannis's child, expecting that this would hurt Stannis's sense of honor. These schemes make use of Shireen's looks: Tyrion proposes that Shireen's great-uncle, Ser Axell Florent, could be the father because she has big Florent ears, but Lord Petyr Baelish prevails with his suggestion that Patchface being the father of Shireen would make for a more juicy tale. He refers to them looking somewhat alike with their speckled, half-frozen faces, and also that the fool is close with the girl. The rumor, strongly supported by Cersei, is meant to be spread via prostitutes in Petyr's brothels, and with the help of Lord Varys through alehouses and pot-shops.[7]

Later, Renly refers to this rumor about Shireen's parentage during his meeting with Stannis at Storm's End, causing great offense.[8] With Stannis having declared himself King of Westeros, Shireen is now referred to as a princess.[9] She often plays with her bastard cousin, Edric Storm, in Aegon's Garden at Dragonstone, and grows very fond of him. Davos Seaworth notes Shireen is much happier around Edric.[10] Shireen, Edric, and Devan Seaworth learn from Maester Pylos.[5]

While attempting to bring peace between Stannis and King Joffrey I, Lord Alester Florent suggests that Shireen be betrothed to Joffrey's younger brother, Prince Tommen. Alester is imprisoned for negotiating with Stannis's enemies without his approval.[11]

Stannis's army and retinue travels from Dragonstone to the Wall to respond to the wildling threat. At the Wall, he leaves Shireen at Eastwatch-by-the-Sea with her mother, while his army marches to Castle Black.[12]

Shireen, Selyse, and Patchface are brought to Castle Black, where the girl is intrigued by the giant Wun Wun.[13]

After Alys Karstark marries Sigorn of the Thenns, Shireen dances with Ser Brus Buckler during the wedding feast.[14]

Val of the free folk is frightened of Shireen due to her greyscale scars, and tells Jon Snow that the child is "not clean" and should be killed or she will put others in danger. Jon is horrified by Val's statement, and is grateful that Selyse and her queen's men did not hear it. Val refuses to let Gilly's baby and his wet nurses stay in the same tower as "the dead girl".[15]

Stannis orders Ser Justin Massey to travel from the crofters' village to Braavos to recruit sellswords. Stannis instructs Justin to support Shireen's claim to the Iron Throne if the king were to die in battle.[16]

I had bad dreams. About the dragons. They were coming to eat me.[4]


Shireen: He's a giant! A real true giant, like from the stories. But why does he talk so funny?


Jon: He only knows a few words of the Common Tongue as yet. In their own land, giants speak the Old Tongue.[13]
—Wun Wun, Shireen, and Jon Snow

Her name was Shireen. She would be ten on her next name day, and she was the saddest child that Maester Cressen had ever known.[4]

This is the king's true heir. Shireen will one day sit the Iron Throne and rule the Seven Kingdoms.[13]

The maesters may believe what they wish. Ask a woods witch if you would know the truth. The grey death sleeps, only to wake again. The child is not clean![15]

Justin: Your Grace, if you are dead —


Stannis: — you will avenge my death, and seat my daughter on the Iron Throne. Or die in the attempt.


Justin: On my honor as a knight, you have my word.[16]
—Justin Massey and Stannis Baratheon