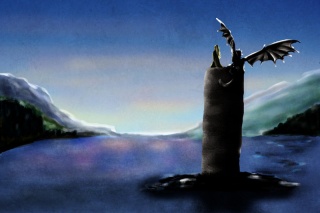 Silverwing was the dragon of Queen Alysanne Targaryen.[1][2] The dragon also fought in the civil war called the Dance of the Dragons.

Silverwing had bonded with Princess Alysanne Targaryen by 48 AC.[3] After King Maegor I Targaryen's mysterious death, Alysanne flew Silverwing to King's Landing, together with her brother Jaehaerys and her sister Rhaena upon their dragons, Vermithor and Dreamfyre, so Jaehaerys could claim the Iron Throne.[3]

During the reign of her brother-husband, Jaehaerys I, Alysanne and Jaehaerys once visited Winterfell with six dragons. While at Winterfell, Alysanne grew bored and mounted Silverwing, flying further north to see the Wall. They stopped at the village Queenscrown on the way.[4][1]

Silverwing became riderless when Alysanne died late in the reign of Jaehaerys I. Throughout the reign of Jaehaerys's successor, King Viserys I Targaryen, Silverwing had no new rider.[6] During this time, Silverwing remained on the island of Dragonstone and made its lair in one of the smoking caverns of the Dragonmont.[5] There Silverwing still was when the Dance of the Dragons began in 129 AC. When Prince Jacaerys Velaryon decided that his mother's faction needed more dragonriders, many men attempted to claim one of the riderless dragons upon Dragonstone, including Silverwing, for their own. Silverwing accepted Ulf the White as its rider.[5][6] Ulf rode Silverwing to battle in the Battle in the Gullet. Along with Vermithor, Sheepstealer, Vermax and Seasmoke, Silverwing descended upon the ninety warships sailing under the banners of the Three Daughters.[5]

When King's Landing fell to Rhaenyra Targaryen's supporters, Ulf landed Silverwing upon the Hill of Rhaenys, outside of the Dragonpit. In the Dragonpit, Silverwing made a lair before flying off to battle. Ulf rode Silverwing into battle during the first battle at Tumbleton. Ulf and fellow dragonseed Hugh Hammer, who had claimed Vermithor, changed their allegiance, betraying Rhaenyra in favor of Aegon II Targaryen. Silverwing, Vermithor, and Tessarion, the dragon of Aegon II's brother Prince Daeron, let loose their flames upon Tumbleton, which was savagely sacked.[5]

As the Hightower host remained at Tumbleton, so did Ulf with Silverwing. During this time, Silverwing was kept unchained beyond the town walls, free to fly and hunt. During the Second Battle of Tumbleton, an army of four thousand men strong, led by Addam Velaryon upon the dragon Seasmoke, surprised the Hightower host at Tumbleton with their night-time attack. Ulf slept through the battle, but even without a rider Silverwing took to the sky during the battle. At one point, a crossbowman shot a bolt at the dragon.[5] Silverwing avoided further battle and instead circled the battlefield for hours. She descended only again the next day, after the sun had gone down, and landed between the slain Vermithor, Seasmoke, and Tessarion. The singers claim that Silverwing attempted to lift Vermithor's wing on three occasions, but Archmaester Gyldayn considers this to most likely have been a fable. When the sun rose again, Silverwing began to fly listlessly across the field, where she few on the burned carcasses of men and animals.[5]

Silverwing's rider, Ulf the White, insisted he should become the new king of the Seven Kingdoms, as King Aegon II was missing, Prince Aemond dead, taking over the plan of the newly deceased Hugh Hammer, who had died in the Second Tumbleton as well. Silverwing became riderless when Ser Hobert Hightower, one of the Caltrops, gave Ulf the White poisoned wine. Lord Unwin Peake offered a thousand golden dragons to any knight of noble birth able to ride Silverwing. Out of the three men who came forth, the first had his arm torn off and the second burned to death. The third man then changed his mind.[5]

Silverwing was one of only four dragons still alive at the end of the Dance. Although accustomed to men, Silverwing became wild during the reign of Aegon III Targaryen, and eventually made her lair on an island in Red Lake in the northwest of the Reach.[6]

Bran Stark mentions Silverwing to Meera and Jojen Reed when they arrive at Queenscrown.[4] Jon Snow tells Ygritte of Queen Alysanne Targaryen's visit to the Wall more than two centuries ago.[1]

While riding in the chain winch at the Wall, Samwell Tarly wonders if Silverwing may have left an egg at the Wall.[2]