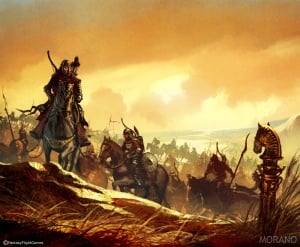 The sun is the star around which the planet of A Song of Ice and Fire orbits. The seven wanderers may be other planets in the solar system.

The sun is included in the sigils of Houses Ashford, Donniger, Egen, Falwell, Farwynd of the Lonely Light, Hutcheson, Lefford, Pryor, and Sloane. Sunbursts are used by Houses Karstark and Kenning of Kayce. House Tarth quarters the sun with the moon. Sunhouse is the seat of House Cuy.[1]

The sigil of House Nymeros Martell was created by combining the sun of the Rhoyne with the spear of the Martells.[2][3] The Tower of the Sun is one of the towers of Sunspear, the family's seat in Dorne.[2] In "The Dornishman's Wife", the title character is said to be as fair as the sun.[4] Dornishmen often use copper armor for ornamental purposes, as it shines in the sun.[5]

House Karstark's motto is "The Sun of Winter", and House Ashford uses "Our Sun Shines Bright".[6]

The Titan of Braavos roars to herald the coming of the sun.[7]

Red priests believe R'hllor made the sun, moon, and stars to light the way.[8] Each morning at first light the priests gather outside their red temples to welcome the sun.[9]

Summer Sun is a trading galley owned by Illyrio Mopatis.[10] Sunblaze is a ship belonging to the Ancient Guild of Spicers.[11]

The Free Cities sometimes refers to the Seven Kingdoms of Westeros as the Sunset Kingdoms.[12] 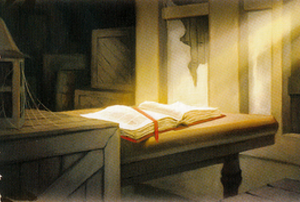 By the Light of the Sun, by Federico Piatti © Fantasy Flight Games

Qartheen believe that dragons were hatched from a second moon that came too close to the sun and cracked, while Dothraki believe that the moon is a goddess, wife to the sun.[13]

According to the stories of Old Nan, the Others hated the touch of the sun.[14]

Lann the Clever is said to have stolen gold from the sun to brighten his curly hair.[15]

Sun Chaser was a ship captained by Elissa Farman.[16]

Sunfyre was the golden dragon of King Aegon II Targaryen.[17]

Daenerys Targaryen refers to Khal Drogo as her sun-and-stars.[18]

Grenn tells Samwell Tarly that Lightbringer glows like it has a piece of the sun in it.[19]

Winter will never come for the likes of us. Should we die in battle, they will surely sing of us, and it's always summer in the songs. In the songs all knights are gallant, all maids are beautiful, and the sun is always shining.[21]

When the sun has set, no candle can replace it.[22]

Caleotte: Do your legs hurt?
Doran: Is the sun hot?[2]

The pyromancers said that only three things burned hotter than their substance: dragonflame, the fires beneath the earth, and the summer sun.[23]

I know why my princess wears a veil. Elsewise her beauty would outshine the sun above.[24]